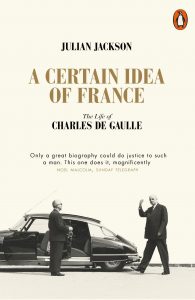 The summary of Julian Jackson’s reading of de Gaulle is the section title of Part Four of this monumental biography: “Republican Monarch.” It is not an entirely original thought, but Jackson puts the case consistently and compellingly. The crisis of legitimacy and executive authority in the Third and the Fourth Republics is contrasted by Jackson with de Gaulle’s austere monarchist-sympathizing upbringing, the consistent bend of his thoughts, and the active policy of his own time in power.

The problem Jackson articulates is, essentially, that France had never come to terms with the first loss of its monarchy. The net result of this was that governments struggled to exercise effective executive power, becoming mired in procedure and faction, leading to near-perpetual instability. This is seen through the eyes of de Gaulle, who as far back as the First World War had identified the issues he would seek to solve in 1958 as he gained semi-revolutionary power. In 1915, de Gaulle lambasts the “odious and stupid” “rabble” of the Parliament for their poor, interfering management of the War. While in a German prison camp from 1916–1918 he articulates the different stages of management of the war, praising the period of “extremely salutary” Parliamentary oversight from 1915–16 (a reversal of his contemporary view), but identifying the time-wasting inefficiency of Parliament’s efforts after that date, where parliamentary commissions and administration sucked up time and dissipated focus. This can be seen as a shorthand for his entire view of French politics during the Third and Fourth Republics, though he expressed himself even more strongly at times. Indeed, the very reason de Gaulle left executive office in 1946 was because he refused to lead a weak executive. He required real and unilateral power to effect change.

This judgement of de Gaulle’s—that France needed a strong executive power, and that it lacked one in virtue of the loss of the monarchy—can be explained by at least three factors beyond the hard experience of seeing Government after Government struggle and fall in front of him (the Third Republic saw eighty-six Prime Ministerial tenures serve in sixty-nine years of that office’s existence; the Fourth Republic saw twenty-one tenures in eleven years; somewhat comically, many Prime Ministers served multiple terms, with what seems at times to have been an official revolving door policy). The three factors I mean are: de Gaulle’s monarchist upbringing; his own autocratic personality; and his belief in politics as the art of responding to contingency. All of these are established early on his life—the importance of contingency is first mentioned in his camp notebooks, by a quote from Boutroux: “Contingency is the characteristic of what might not have been or could have been different.”

We see his autocratic personality exemplified in many ways—certainly by his bullying behavior, by his fury at attempts to undercut him, and by his practiced “obscurity,” where no one could quite tell what he thought or was going to do, leaving him in full control. Both the second and third qualities are perhaps best exemplified by his “escape” of 29 May 1968 during the street revolutions of the Paris students and workers. He deigned to tell no one of his whole plan beforehand, and told his Prime Minister and Cabinet nothing at all. He left Paris, flying to Germany to meet army chiefs, meanwhile moving his son’s family to a point of distance from the chaos. Was he planning to resign at the start of the day? Was he seeking to procure military assistance in crushing the riots? No one quite knows. What we know is that he felt he had lost control, and wanted it back again, and this dramatic disappearance was the means to put himself at the helm. Jackson sums up his motives thus: “above all he wanted to escape from the Elysée, free himself from his Prime Minister, and make himself a central actor after several days of being sidelined by him.” De Gaulle used mystery here to assert power. It was one of his recurrent stratagems (and infuriating to his allies).

The monarchical sympathies are clear, as is his application of contingency to them. He was raised in a conservative Catholic, monarchist family which took a pragmatic approach to civic affairs—his father, who taught in an ever-pressured Catholic school, described himself as “a monarchist in feeling and a republican in thought.” Charles would often answer, when asked in later life who his greatest influence or hero was, “My father, who was the best man I have ever known.” At heart, it seems de Gaulle really wanted the monarchy back. Even as President, de Gaulle would meet with the Comte de Paris, the Legitimist heir to the French throne, and repeatedly assured that affable old buffer that France needed its King back. In 1961, he told the Comte that “France is gently returning to its old and traditional monarchy”; in 1962, he suggested the Comte prepare to succeed him after his (presumably near) retirement; in 1966, he mixed realism with continued allegiance: “Personally I would have liked the monarchy, you know my views about this. You are the king … But I don’t think it is possible.” De Gaulle told his crony Peyrefitte that the Comte “encapsulates in his person the forty kings who made France” even if “he no longer corresponds to this century.”

From motives of both contingency and, perhaps, egotism, de Gaulle saw a different solution to the need for legitimate executive authority: himself, and the Presidency he created in the Fifth Republic. He said that the “popular monarchy [of the Presidency]” had “instituted a new legitimacy which makes a link to the legitimacy interrupted by the Revolution.” Indeed, it was for this reason de Gaulle pushed—at the risk of his own regime—the constitutional changes of 1962, which made the Presidency elected by direct universal suffrage rather than via an intermediate electoral college. Real legitimacy might attach to the office, and give it real authority over recalcitrant Parliaments, if it could be proven to really represent the people best; to put it a different way, the Presidency could gain the majoritarian legitimacy of a referendum. (We can see this mode of popular monarchy rhetorically adopted by Macron in his “Jupiterian” presidency.) De Gaulle added personal authority to this democratic legitimacy—during the Barricades Week he called to mind the “legitimacy I have incarnated for 20 years.” Here we have the significance of the lonely stand de Gaulle made in 1940, as in his initial L’Appel du 18 juin:

This government, alleging the defeat of our armies, has made contact with the enemy in order to stop the fighting … Must hope disappear? Is defeat final? No! … I, General de Gaulle … invite the officers and the French soldiers who are located in British territory … to put themselves in contact with me. Whatever happens, the flame of the French resistance must not be extinguished and will not be extinguished. [emphasis mine]

A government representing the failure of the Republic—even its final creation of a strong executive in Pétain only an active means to accepting defeat—had abandoned France. One man—that first-person-singular that would become his hallmark—bore “the flame of French resistance” and all hope for his nation’s future. As Maritain put it in 1942, de Gaulle’s defiance provided “a sort of heroic chivalry [that] has given back hope to the French.” The conception of himself as France stayed with de Gaulle for the remaining thirty years of his life, and usually a large number of Frenchmen agreed, at least after 1944.

This general argument—of de Gaulle as republican monarch, resolving France’s crisis of legitimate authority, first in 1940 and then in 1958—is, as I say, Jackson’s main thrust. But he also aptly depicts de Gaulle’s attempts to secure France’s status—what de Gaulle called grandeur. Jackson particularly emphasizes the General’s policies in Africa (arguably successful; Jackson recounts the somewhat charming, largely alarming tale of how cannibal Chief Bokassa intended to fly to Paris in 1968 to lead the defence of his beloved “Papa,” de Gaulle), in the European Communities (somewhat effective), and on the wider world stage, particularly in his attempts to counterbalance America and the USSR with a third bloc (unsuccessful on the whole). Jackson does a good job of explaining the cross-cultural and Gaullishly obscure idea of grandeur—while one never takes away a simple technical definition, the idea that France might achieve some of its own myth, and command respect amongst the nations, is clear. “[D]e Gaulle exhorted the French to believe in themselves as a ‘great’ nation—but grandeur was an attitude rather than a concrete goal.”

Jackson largely explains de Gaulle’s fall as a result of a nexus of factors, perhaps aggravated by age: a loss of political vision, an increasing crotchetiness, and most distinctively (in Jackson’s account) a failure to articulate a practicable version of his concepts of “association” and “participation”—the Gaullist equivalent of an economic Third Way. Indeed, the referendum after which he resigned—relating to regional reform—was an ancillary part of this project. Jackson sums up participation as “more a posture than a policy,” and in de Gaulle’s mind it seems like this is true—a sincere posture, perhaps, but no more. What surprises one is that de Gaulle did not turn more practically to the ideas of those on whom he was gesturing towards—Maritain, for instance, whom de Gaulle read extensively, or Weil, whom de Gaulle technically commissioned to write the astounding The Need for Roots, or even his contemporary Salazar.

Jackson’s book is at its weakest when de Gaulle is out of the action, or as his Presidency declines from the mid-’60s; unlike Teddy Roosevelt or Churchill, de Gaulle’s private life was austere and quiet (though Jackson does give us the permanently endearing portrait of the General’s devotion to his disabled daughter Anne). This is why, I think, Jackson’s single-volume biography seems slower than Morris’s three on Teddy or Manchester’s The Last Lion trilogy. Moreover, it is perhaps fair to say that Jackson is himself a more insular writer than Morris or Manchester. Writer and subject are well-matched in each case. Nevertheless, this is a studied and very readable big-book-intro to de Gaulle, and provides plenty of food for thought for the reflective conservative.

By most measures, de Gaulle’s career must be accounted a conservative triumph; he saved his nation from chaos twice (Churchill saved the world, but de Gaulle saved his nation; if you were French, which would you value more?), provided it with long-lasting ordered government for the first time since the fall of each Buonaparte, and resisted dissolution and anarchic change wherever he could. However, there is a warning note: de Gaulle used the tools of disruptive Bonapartism to restore order for all his Legitimist mind—what dangers lie therein!—and even de Gaulle could not meaningfully stem the tide of innovation and chaos, either in the Winds of Change, nor the Sexual Revolution that was one of the real motivators of the French unrest of ’68.

Nonetheless, with his limitations in mind—as a bully, an egotist, and finally a victim of the Great Dissolution—it is right and just to offer the General the last word on his ambitions for France, which were embodied by himself. When asked which great leader he was like—Joan of Arc, the Sun King, Bonaparte—he said:

My only rival is Tintin! We are the small who refuse to allow ourselves to be cheated by the big.

And on his means, generally effective:

However difficult reality might be, perhaps I would be able to master it, to quote Chateaubriand’s phrase, “by leading the French through dreams.”

Owen Edwards is a missionary and writer in the North-East of England. God has blessed him with a fine wife and two vigorous young sons, and he occupies his spare time with reading and tending to a smallholding.