Depths of Hell, Heights of English 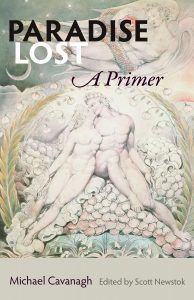 There’s great value in reading fictional literature that imagines hell, devils, and the origin of evil—and it’s not just because it satisfies an intellectual curiosity to go beyond the particular data provided by the scriptures of the great religious traditions. C. S. Lewis hints at this with two quotations found in his great satire Screwtape Letters, one by Martin Luther, the other by Thomas More. “The best way to drive out the devil, if he will not yield to texts of Scripture, is to jeer and flout him, for he cannot bear scorn,” lectures the German reformer. “The devil … the prowde spirite … cannot endure to be mocked,” observes the English statesman. When man reflects on sin and Satan, as long as such contemplation is done as a study for “battle readiness,” he may grow better prepared to identify and reject evil when it presents itself.

This is one reason to read John Milton, especially with such aids as Michael Cavanagh’s recently published Paradise Lost: A Primer. In Milton, we find one of the best reflections on evil—regardless of whether or not one believes in the devil—ever put to paper. Alternatively, Milton’s descriptions of heaven can elevate our hearts and minds to an eternity worth striving for, rather than one that all too often seems to us as obscure or uninteresting. Of course, there’s also the enchanting quality of Milton’s English, visible in such places as the following:

In a time when there is great concern over the decline of the English language in the face of technology, adolescent fads, and loose grammar, a reminder of the heights to which our vernacular is capable is sorely needed.

But first, let’s tackle Satan. Book I of Paradise Lost takes place in the Underworld and involves a series of speeches between Satan and his various minions. One of the first ironies is that while Satan had desired to “set himself in glory above his peers,” the devilish dictator’s speech is all about equality and partnership. “Now that he has lost that revolt, Satan seeks, at least for the time being, to pass the responsibility around: we did it together!” Those who seek power via malign means typically exploit their power-play in this double-sided manner: they want unparalleled authority, but they are willing to appeal to the egalitarian impulses of their comrades-in-arms if that will help motivate the required human capital for war.

Nor should we be surprised that the father of lies is a steady machine of deception. He urges his armies to “awake, arise, or be for ever fall’n.” Yet in truth they are eternally lost, and no further battles can change that. The devil claims that there can be hierarchy in Heaven so that he can remain on top, but then claims that all angels are equal because they are supposedly equal to God. “This claim can be credited only if one isn’t listening,” observes Cavanagh.

We should also not be surprised that the supreme liar is also a master manipulator and rhetorician. He claims that his armies “shook” God’s throne, implying an ability to affect the divine. He asks in language reminiscent of Shakespeare’s Henry V at Agincourt, “What though the field be lost?” He cleverly inverts the power of God to make good out of evil, asserting: “To do aught good never will be our task, / But ever to do ill our sole delight.” He makes slogans, Cavanagh notes, in a manner worthy of Churchill: “What reinforcement we may gain from hope, / If not what resolution from despair.” He declares, in language even the unschooled Milton reader will recognize, “Better to reign in Hell, than serve in Heav’n,” and “The mind is its own place, and in itself / Can make a Heav’n of Hell, a Hell of Heav’n.”

But, Cavanagh reminds us, even in these rhetorical flourishes, Satan’s logic is illogical: “if you make a Hell of Heaven, well, that is what, with predictable results, Satan has already tried to do, and why would he want to try it again?” Indeed, that Satan would think either that he could achieve a different result having already lost suggests either that he is insane or a nihilist … or perhaps both. A later speech by Beelzebub, another demon, seems to validate this when he calls for terrorism against God’s creation. This will gain nothing but an interruption of God’s joy. This is better, Beelzebub reasons, than “to sit in darkness here / Hatching vain empires.” Satan later further elucidates this twisted logic: “Which way I fly is hell; myself am Hell.”

Alternatively, and less depressingly, Milton also offers an interesting vignette into Eden. It is an open and inclusive place. It is full of “Nature’s whole wealth.” Indeed, Cavanagh notes that “all” is employed liberally across Book Four: “Flow’rs of all hue,” “All trees of noblest kind,” “all kind / Of living creatures,” “all these delights,” “all these joys,” and “all other creatures.” Edenic plenitude is inherently both full and diverse. This creates what Cavanagh calls a “healthy tension,” perhaps analogous to the unity and diversity found in the traditional university. “All,” he explains, “may signify something that capaciously holds contrarieties without forcing them into a rigid uniformity.” It is “richly and strangely inclusive.”

Such descriptions make paradise something more appealing. It is no regulated, monotonal land, but complex, strange, and fascinating enough to hold man’s attention, perhaps indefinitely. Indeed, Milton tells us that in paradise the Sabbath is not in “silence holy kept,” in a dull, puritanical fashion, but, as Cavanagh describes it, a “raucous celebration.” It is in paradise that we find the fulfillment of the divine promise: “So Heav’nly love shall outdo Hellish hate.”

The openness and inclusivity of paradise also allows Satan to enter in Book 9. This climactic book, says Cavanagh,

tests us and tempts us; it forces us to ask what marriage is; it compels us to decide between the claims of spouse and God; to wonder if virtue can coexist with innocence; to ask whether the state of innocence is sustainable or even desirable; to ask if God is justifiable, given the strength of human loyalties.

Satan approaches Eve and offers a cacophony of arguments: that God has mistreated her and Adam, and that knowledge is better than ignorance. He appeals to her ambition, both as it relates to equality with God and equality with Adam. When she finally gives in, we witness how quickly sin distorts and undermines human rationality and virtue. Eve considers not telling Adam so that she can preserve this new secret power for herself … yet, she speculates, God might then replace her with another woman. When they converse, her speech to Adam deceives and manipulates, threatening Adam that if he doesn’t eat soon, she may renounce him.

Adam’s response is desperate and dismayed, suggesting a man looking for comfort. He asserts:

However I with thee have fixed my lot,
Certain to undergo like doom; if death
Consort with thee, death is to me as life
So forcible within my heart I feel.
The bond of nature draw me to my own,
My own in thee, for what thou art is mine;
Our state cannot be severed, we are one,
One flesh; to lose thee were to lose myself.

We might be inclined to think Adam’s choice to fall with Eve heroic, yet a closer examination exposes his underlying self-centeredness: “my,” “me,” “mine,” “myself.” Cavanagh explains: “Adam acts like he’s taking a hard way out, but actually he alleviates his agony of decision making and avoids the issue.” In the end, Adam is impetuous, he gives up on God too quickly, and doesn’t contemplate the meaning of Eve’s disobedience. “On top of that,” observes Cavanagh, “he is, by God’s rules, guilty of negligence in letting Eve go.” Book 9 ends with another argument, the two blaming each other and casting aspersions. Sin, rather than bringing freedom and elevation, sinks us down to the same self-serving destructiveness of Satan.

Beyond helping us appreciate the splendor and broad themes of Milton, Cavanagh provides well-needed biographical and historical data. For example, Milton’s tempestuous romantic life—he was the author also of several infamous “divorce tracts”—makes sense of his emphasis on marriage as companionative. Milton also served under “Lord Protector” Oliver Cromwell, which explains the sometimes anti-Catholic polemic nature of the text. Milton’s heterodoxy (he was likely an Arian) is also sometimes apparent.

Milton, with Cavanagh’s assistance, stokes our spiritual imaginations, while offering manifold warnings of what happens when we embrace evil and go our own way. Says Cavanagh:

[T]rial is the moral principle in Milton’s world: even good angels are not exempt; even God must be accountable, and must subject himself to trial by the poet and reader in order to be legitimate.… This debt is dependency and service, the opposite of Satan’s fantasy of self-begotten autonomy. This obedience involves taking on sacrifice. God sacrifices the Son, the Son his divine being. Eve and Adam both sacrifice their self-sufficiency.

Or, as Jesus himself taught: “He who loves his life loses it, and he who hates his life in this world will keep it for eternal life.” If only Adam had understood this, we might have preserved paradise.