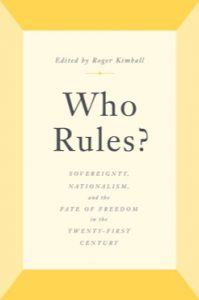 Who Rules? Sovereignty, Nationalism, and the Fate of Freedom in the Twenty-First Century.
Edited by Roger Kimball.
Encounter Books, 2020.
Hardcover, 128 pages, $22.50

Who Rules? is a valuable collection of essays by some of today’s finest conservative thinkers including, among others, James Piereson, John Fonte, and Christopher Buskirk. The nine essays collected by Roger Kimball explore various aspects of a single, unifying theme: the danger posed in our time by the growth of what has been called “totalitarian democracy.”

Nothing could be more important, or more relevant, than the issue of the incursion of the federal government into all aspects of its citizens’ lives, and Kimball has done an outstanding job of selecting essays closely focused on this issue. With a federal workforce of over two million civilians and another 1.3 million serving in the military, and with budget outlays for 2020 of $6.6 trillion at the federal level alone, the United States government has grown far beyond anything imaginable to our Founders. Driven by a dangerous millenarian philosophy that judges every action by an abstract standard of social justice and equality, American society is moving ever closer to despotism.

Along with the demands of a “woke” culture, our nation has ceded much of its sovereignty to the authority of international bodies and to the terms of international agreements. Invariably, liberals attempt to align American policies with so-called global standards based, in fact, on a small and diminishing number of regimes and ignoring the importance of a multiplicity of outlooks among sovereign nations.

A loss of sovereignty comes from the abandonment of local sources of identity, including nationality, religion, and local culture, that are the very basis of human identity and so of sanity, a point that Alasdair MacIntyre analyzed at length in his magisterial volume, Whose Justice? Which Rationality? It is impossible to stand apart within a vacuum of abstract rationality unaffected by local particularities that are the basis of our humanity and to judge what is best for others while deliberately blinded to those particularities. Progressives, however, have been attempting just this for well over a century, and with disastrous results.

The essays in this collection provide a thoughtful discussion of these pressing issues. In his fine essay, “The Idea of an American Nation,” James Piereson traces the evolution of thinking about the American nation from that of the Founders, with their “marked tendency … to conceive of the American union according to the imagery of empire,” through Lincoln’s “political religion” of “an indivisible American nation … anchored in the Declaration and Constitution,” to the confused present in which both our founding ideals and the constitutional basis of unity have been rejected by large numbers of Americans. What basis of national identity can exist among a people whose strongest affiliations are to their own exclusive conceptions of ethnicity, gender, national origin, and other separate factors?

Piereson does not hazard a guess, but as John Forte points out, the defense of sovereignty was one of the central objectives of the Trump administration, and this defense involved pushing back against unfair global trade practices, supranational legislation, international agreements that infringed American sovereignty, and global courts, especially those that would hold American troops accountable in a time of war to unworkable standards. The defense of sovereignty also involves resisting the challenge of the administrative state at home. Among the greatest dangers to democracy, according to John O’Sullivan, is the progressive “system of rule by experts” beyond the control of democratically elected representatives. For these “experts” and the leftists who promote them, national identity is not a good to be defended but an obstacle to be overcome.

Like O’Sullivan, Angelo M. Codevilla writes that in the West, and especially in America, “a ruling class” has promoted “the sense that we are parts of a world political economy ruled by experts,” and, of course, the idea that these experts are infallible, not only within their technical areas of expertise but in terms of their moral and cultural judgments as well. If those experts insist that abortion is the right of every woman on the globe and that affluent nations such as the United States must fund those abortions, the issue is settled, and no further discussion is permitted either by the print or electronic media. Even the expression of opinions by private citizens can be tracked and censored from social media, the most important public arena today for the expression of ideas by most individuals.

In place of the nation-state, the technocracy would create what Michael Anton prefers to call a “universal and homogenous state.” The seductive dream of such a world order drives much international policymaking, both abroad and here in the United States. It promises a world of global equality, prosperity, and permanent peace, if only America would surrender its place as the world’s only superpower and the bastion of “Western values.”

In place of what they view as a deeply immoral civilization based on force and cultural advantage, progressives would have us accept our rivals’ promises of cooperation and non-aggression, but in doing so we must accept the false notion that nations are no longer capable of aggression and that war is no longer a possibility. It is this very denial of the existence of enemies, Anton asserts, that is our true enemy. It is not merely centralization of authority by our national government but global centralization of authority under their control that this enemy seeks, despite the numerous examples of brutal regimes arising from just such thinking in the past. And it is not just centralization but leveling and obeisance that is required: one must become not just one of the governed but a true believer, and those who fail to exhibit an adequate degree of enthusiasm for the millenarian project must be crushed.

Roger Kimball’s collection is not by any means just another serviceable compilation of wide-ranging commentaries: it is a spotlight focused on today’s unruly political and cultural scene, and it reflects important advances in thinking on the crucial question of the direction of Western civilization and the very survival of the American nation. Much more is involved in this volume than the question of “who rules?” It is not just a matter of “who” but of “how” and “toward what end,” and each of the book’s contributors offers thought-provoking answers to these questions. Their forthright analysis produces some valuable insights, including David Azerrad’s conclusion that identity politics, with its ceaseless rehearsal of victimization and insistence on white guilt, “in effect invites us to embrace racism, but to do so in the name of anti-racism.” Similarly, Victor Davis Hanson insists that “multiculturalism is retribalizing America,” leading to the same “fragmentation and evaporation” of social norms that took place in imperial Rome. Along with multiculturalism, a liberalization of residency rules and de facto open borders have undermined the foundations of citizenship to the point that “American citizenship as we once knew it is becoming meaningless.”

Paradoxically, as Christopher Buskirk rightly insists, it is not by advancing an ideology of one’s own that one defeats the dangerous neoliberal ideology of globalism: what is required is a restriction of government power, especially in regard to those crucial arenas of religion and the family. It is certainly true that conservatives themselves have often lost sight of the human scale that should be the basis of their response to progressive overreaching. It is not a grand ideological project, even that of “making America great again,” but a return to common sense and everyday reality that is called for. The solution to the problem of a world seduced by the millenarian dream of perfection is the restoration of consensus that family life, religious faith, and a more local, “messy” democratic practice are the central pillars of existence.

Buskirk writes perceptively of the dangers of modern liberalism and globalism—“closely related” impulses that have misguided so much of American policy since the second World War. In his assessment of our condition, Buskirk is direct (“we live in a largely materialist, self-centered, pornified culture”), and his directness, like that of others in this collection, is long overdue. Whether his call for a “return” to the humbler aspects of life as a solution to our culture’s decline is a practical possibility for a culture that appears to be declining ever further is another matter. For the first time in our nation’s history we are faced with the combination of a government of enormous size and power, a complicit media, and a militant educational system all working toward the same end. Many of us believe that we, as individuals, have the strength to resist the influence of this ideological alliance, but is this true of the majority of Americans?

Who Rules? is highly relevant and original in its readings of contemporary politics and culture. I benefited from each of the chapters in this splendid book and from Roger Kimball’s thoughtful introduction. For those who are grappling with the political uncertainties of our times and especially those who are concerned about the growing centralization of power and suppression of thought, Who Rules? should serve as a useful guide. Who Rules? is a worthwhile, readable, and insightful collection, and it is a valuable contribution to our effort to understand the situation we find ourselves in and, indeed, to maintain our very sovereignty as a nation. As such, it deserves to be widely read and discussed in the years to come.