Diaries of a Poor Judge of Character 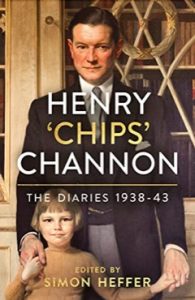 “Chips” Channon was born in Chicago in 1897 to a moderately wealthy family. During the First World War he served in France with the Red Cross, then he attended Oxford after the war. He was one of those Americans—think Henry James—who found his native country crude and boorish and admired, worshiped might be a better word, the aristocratic world of postwar English café society.

Independently wealthy, he dabbled in literature, both fiction and history. His biography of King Ludwig of Bavaria received good reviews, but Channon’s eye was on society and politics. In 1933, he married Honor Guinness, of the fabulously wealthy brewing family. Their money provided a house in fashionable Belgrave Square and a large country estate but most importantly opened further access to the top rungs of English society. In 1935, he entered politics as a Conservative. During this time, he kept a detailed diary, of which this is the second and most important volume, dealing as it does with the years 1938 to mid-1943, a period that saw the outbreak of World War II, the darkest period of the war for England as the Germans overran Western Europe, and the beginning of the turn of the tide against Nazi Germany in Russia and at El Alamein.

For anyone seeking an insight into what was happening behind the scenes during this phase of the war, I would rank Channon’s diary on a par with Jock Colville’s study of his time working with Winston Churchill, and Field Marshal Alan Brooke’s dyspeptic portrait of his years running the military side of the war for Britain while having epic clashes with Churchill.

The second volume of Channon’s diary opens on October 1, 1938, just after the Munich crisis had been resolved and Neville Chamberlain was hailed (by no one more than Channon) as the man who had brought peace in our time. Channon was a great admirer of Chamberlain and a strong proponent of appeasement. One of the most fascinating features of the opening section of the diary is Channon’s worship of Chamberlain, whom he describes in one entry as “the greatest man of all time … our amazing little god.” He even refers more than once to Chamberlain’s “intoxicating and dazzling smiles,” a feature few others saw in that sheepish mustached face.

Like many of the appeasers, Channon feared communism and saw Nazi Germany with all its flaws as a bulwark against the potential aggression of the Soviet Union. He was a poor judge of character. He distrusted the anti-appeasers. Winston Churchill was “that angry bullfrog, slave of prejudice” who sought a war. Duff Cooper, who resigned from Chamberlain’s Cabinet in protest over Munich and whose famous and charming wife, Diana, Channon adored, was “a third-rate little fellow, a peppery parakeet … our inflated conceited turkey-cock.” But Channon’s particular bête noire was Anthony Eden, who was described as “unaware, ill-formed” and “the architect of our misfortunes.”

A fascinating feature of the diary is to follow Channon’s misjudgments and wrong predictions. He assured his good friend, the Duke of Buccleuch, in July 1939, that “there will be no war this year.” In late August, as war drew closer, he was convinced that another Munich conference, this time at the expense of Poland, would ensure peace.

When Chamberlain’s government fell after its disastrous conduct during the so-called Phony War that saw the German conquest of Denmark and Norway, Channon lamented the rise to power of Churchill. On the day Churchill became Prime Minister, with the Germans sweeping through Holland, Belgium, and France, Channon’s diary entry is revealing: “England in her darkest hour had surrendered her destiny to the greatest opportunist and political adventurer alive,” an opinion that Channon would occasionally modify throughout the years covered in the diary.

His dislike of Churchill often clouded his judgment. After listening to Churchill’s famous speech about the summer of 1940 being England’s finest hour, Channon wrote that the speech did not move him and wondered whether it was wise to talk about fighting alone. Regarding Churchill, Channon came to admit that “I hate him; but we cannot do without him.”

Sprinkled throughout the diary are observations on the war that reveal Channon’s limitations as a political observer. He wanted England to sue for peace after the fall of France in June 1940, something that even his idol Chamberlain rejected. When Hitler attacked the Soviet Union, Channon hailed it as one of the “cleverest acts of his whole career.” He even believed that the Japanese attack on America had somehow weakened Churchill’s government despite providing England with a powerful ally. In December 1942, with the Russians about to rout the Germans at Stalingrad and the British and the Americans sweeping to victory in North Africa, Channon thought Germany might attempt an invasion of England.

Channon’s views become less interesting politically once he lost his position as parliamentary secretary to Rab Butler at the Foreign Office in 1941. From that point the diary is focused on social events. At times it reads like one long list of shopping expeditions and parties attended. An entry for September 12, 1941, is typical: “All day long people poured in; the telephone buzzed; messages were sent. I had a reussi (successful) and rare luncheon party: the Prince Consort of Luxembourg, dark and Bourbon-looking he talked French—the Grand Duchess was in the country … the archdukes Robert and Felix—the latter never left me all day … Sir Noel and Lady Charles …” There are long passages such as this scattered throughout the last half of the diary.

Channon’s personal reactions are interesting and surprising. For a strong monarchist—he described himself as a lover of royalty—he had a low opinion of King George VI and Queen Elizabeth. He thought the King dull and a little slow while the Queen was “a snob at heart.” This probably was a result of Channon’s admiration for the abdicated Edward VIII. Channon, though a snob himself by any standards, did have a sense of humor. On a visit to the Bishop of Bath and Wells, Channon and the bishop shared their admiration for the novel Barchester Towers. “There is nothing I like better,” the bishop said, “than to lie in bed with my favorite Trollope.”

The diary reveals Channon’s personal struggles during the war. His wife Honor began an affair with a neighboring farmer who raised horses. This depressed Channon—it seems more for the social status of her lover than the affair itself. Channon was loyal to his friends, both political ones such as Leslie Hore Belisha, who had been ousted from the Chamberlain government—unfairly in Channon’s view—before the war, and society types such as Emerald Cunard, whose parties he always looked forward to even when she fell out of favor. His closest friend, Prince Paul of Yugoslavia, had tried to make a deal with the Nazis to save his country from invasion and ended up living in exile in Kenya. Channon remained loyal to him throughout his ordeal.

Channon had deep love for his son Paul, who was sent to America when he was four during the bombing that began in the summer of 1940. Paul would go on to have the kind of successful political career that had eluded his father and served in various Conservative governments in the 1980s. Also important for Channon was the meeting before the war with a young Army officer, Paul Coats. The two would become lifelong partners and Coats would be responsible for preserving Channon’s diary in hopes of enhancing his reputation. An earlier version of the diary, edited by the historian Robert Rhodes James, was published in 1967 and was heavily edited because so many people mentioned were still alive. This new three-volume version will remedy that mistake.

A note about the editing. Simon Heffer is an outstanding historian—see his recent study of England between 1880 and 1914, The Age of Decadence for example. He has written an excellent introduction to the Diary and provides explanatory notes that are a model for volumes such as this. I look forward to the third volume of the diary, which should appear later this year.

John P. Rossi is Professor Emeritus of History at Lasalle University in Philadelphia where he taught classes in British history for over 40 years.