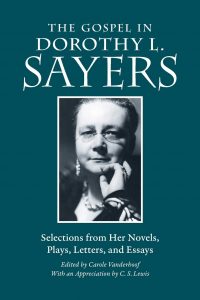 Famously called by C. S. Lewis “gleefully ogreish,” Dorothy L. Sayers was not known as an amiable person, yet this self-presentation (which was largely accurate) also encompassed a woman willing to engage in vigorous and honest intellectual dialogue. A mystery writer, playwright, and essayist who wrote extensively on public life, theology, and the various social issues of her day, Sayers’s body of work has become a part of the Christian intellectual tradition. She combined a clear adherence to Christian doctrine with a unique authorial voice. For her, the writer’s life was more than mere scribbles on paper. It was a vocation, a calling from God.

The recent collection from Plough Publishing, The Gospel in Dorothy L. Sayers, presents a wonderful collage of Sayers’s prolific output. Editor Carole Vanderhoof organizes the passages by such Christian themes as “Sin and Grace,” “Forgiveness,” “Belief,” “Work,” and “Resurrection.” This approach is entirely appropriate given that everything Sayers wrote was informed by her faith.

The introduction gives sufficient background. Born in Oxford, Sayers “considered herself Anglo-Catholic” and “used the word ‘Catholic’ in her writings to mean ecumenical,” striving to unite (at least in dialogue) Roman Catholics, Anglo-Catholics, and Greek Orthodox. She attended Oxford University when women were not awarded degrees, although she ultimately did receive one retroactively.

Sayers’s personal life was filled with tension and difficulty. She had a son out of wedlock in 1924 with a man who was married and who refused to have anything to do with either Sayers or their son. She kept this a secret and let a cousin take care of her son until much later, when she officially adopted him. In 1926, Sayers married “Mac” Fleming, “a Scottish journalist and World War I veteran,” but this relationship too was fraught with turmoil. As Fleming’s health declined, his consumption of alcohol rose. Sayers cared for him until his death in 1950. Sayers herself would die seven years later, of a heart attack, at the age of sixty-four.

As is evident from this collection, Sayers’s strong voice joined a dialogue with modernity about the Christian faith. The selections chosen by Vanderhoof reveal a mind in search of the best ways to introduce (or reintroduce) the world to the Gospel. Even when she is writing about murders that her most famous creation, Lord Peter Wimsey, is tasked with solving, Sayers’s words are informed by a larger truth that is not dependent upon the vagaries of human intellectual fashion or social issues. As expected from a mystery novelist, Sayers continuously contemplated the power and absurdity of evil, and Wimsey served as the perfect vehicle to ask deeply probing philosophical questions on the nature of evil.

Sayers does not fit any neat political category, not the divisions of her own times, and certainly not any of our current, strange varieties of polarization. She wrote against National Socialism and the “bestial ferocity in the Totalitarian States.” She clearly championed the significance of human freedom, but not the kind of free market capitalism defended at the time by many Christians, which she described as “obstinate selfishness.” Even in her discussion of economics, Sayers was a consummate theologian. She found the pursuit of business efficiency appalling and connected it clearly with “covetousness.” According to her, modern “covetousness is not incarnated in individual people, but in business corporations … which have neither bodies to be kicked, nor souls to be damned …” She focused on the question that remained: how to restore dignity in work while allowing the free market economy to flourish? Sayers reminds us that even issues of economic structure must be informed by Christian principles of charity and justice, and that those principles are not the same as efficiency or profit-maximization.

Sayers’s Christianity is neither warm nor soft. But is this really her take or is it, as she insisted, related to the nature of the faith? People who criticize Christianity tend to focus on that awful word, dogma, and maintain that the faith limits freedom. It is true that rules are always limiting in some way, but Sayers offers a more robust response—and defense:

“It is the dogma that is the drama—not beautiful phrases, not comforting sentiments, nor vague aspirations to loving kindness and uplift, nor the promise of something nice after death—but the terrifying assertion that the same God Who made the world lived in the world and passed through the grave and gate of death. Show that to the heathen, and they may not believe it; but at least they may realise that there is something that a man might be glad to believe.”

There is passion in this voice, but no “comforting sentimentality.” She presents truth as she sees it, as if she has no time to waste. She may have been rough and, as Lewis said, “ogreish” in her public writing, but Sayers was also compassionate, in a bracing manner. In a letter to Patricia Flavel, dated December 14, 1948, Sayers urges her to “be precious” to herself because she is “precious to God.” She continues by reflecting on the importance of a practical care for the soul: “You must not do damage to your own soul, or your neighbour’s; you must respect and take all reasonable care of your body and his, because it is God’s property, and should not be treated with careless irreverence.”

There is something holistic in Sayers’s approach to faith. She thinks at all times in terms of relationships and the work to be done. We ought to be mindful of our relationship to God, ourselves, and our neighbor, even our enemy. She sees this as the only way to create a flourishing community, despite the tensions that will arise even within the faith itself. She writes that “the only true way of serving the community is to be truly in sympathy with the community, to be oneself part of the community and then to serve the work without giving the community another thought. Then the work will endure, because it will be true to itself.”

The present collection of Sayers’s work provides the reader with an excellent introduction not only to the flavor and themes of her writing but to the scope and variety of work she created. Much of what she has written transcends her own time. One case in particular of enduring value is her discussion of our besetting sin of despair or acedia (known by the Desert Fathers as the “noon-day demon”). She writes that “we think that if we are busily rushing about and doing things, we cannot be suffering from Sloth.” But that’s not the case at all. Acedia or Sloth has a way of creeping into our consciousness. According to Sayers, “it is a sin which believes in nothing, cares for nothing, loves nothing, hates nothing, finds purpose in nothing, lives for nothing, and only remains alive because there is nothing it would die for.”

Sayers was very much aware of how existential illusions affect our spiritual lives. Perhaps this is one of the reasons she presented an ungilded truth (and Truth!) that can come across as brisk and unexpected. Perhaps, unlike most people, she saw the significance in not doing “damage to [your] own soul,” and the need to value ourselves and others as appropriately “precious” because God sees us as such. It’s certainly good spiritual advice to remember.

Emina Melonic is a writer and critic based in Buffalo, New York. Her work has been published in American Greatness, The New Criterion, The Spectator (US), Splice Today, Law and Liberty, Modern Age, and New English Review, among others.