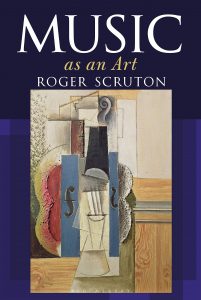 In Music as an Art, the late Roger Scruton seeks to defend Western high culture by defending its summit, classical music. It was a defense Scruton is well-suited to make, in part because he had made it so many times before.

Scruton, a prolific writer, speaker, and conservative public intellectual, was knighted in 2016 and died of cancer on January 12, 2020. He leaves behind a vast corpus of work investigating aesthetics, religion, and politics and the things that cross these paths, namely music, architecture, nationality, immigration, and sex. The guiding thread among his muscular body of work is his love for Western culture and its traditions, a love made most explicit in his writings on art and aesthetics. In his many works on the subject—including those relevant to this discussion, in particular The Aesthetics of Music (1997), An Intelligent Person’s Guide to Modern Culture (2000), and Understanding Music (2009)—Scruton writes as a man standing at the end of a tradition and trying to call it back into our consciousness. He shouts, and though many people may hear him, few are able to listen.

This point features prominently in Music as an Art. Hurried, distracted, and steeped in a popular culture that is as monotonous as it is vulgar, we in the West have lost the ability to distinguish between what earlier generations would have called art and what they would have called noise. Our loss is not only the loss of our ability to listen to lengthy, complex musical arguments; we have also lost the ability to discriminate. We can no longer “[eff] the ineffable.”

The consequences of this learned forgetfulness are far-reaching. Most immediately, the massive trove of Classical music, and the tradition it promulgates and is promulgated by, becomes like a lost language, a new and indecipherable Linear A. In the long run, the inability to know art from the rest—what is good from what is bad—leads to the degradation of life outside the concert hall. If we cannot judge music, how can we judge anything else? Scruton does not make this last point so directly, nor does he speak in as scolding a tone, but his discussions of morality, particularly in the chapter “Music and the Moral Life,” lead the argument in this intriguing direction.

Among these big-question concerns, Scruton dives deep into the particulars of the musical art form and offers much to the student of aesthetics. His analysis of the corrosive nature of the avant-garde and atonal music and the loss of melody is well-grounded and engaging. His belief that we have replaced tones with sounds and replaced “the experience of music [with] the concept of music” is provocative, if not depressing. And his insight that “music exists in the ear of the listener,” while commonplace, drives home the point that art and the continuance of an artistic tradition is a responsibility that belongs to both the audience and the educational establishment who train the audience to listen. It is a responsibility that they—we—have shirked. As Scruton points out here and in many of his other writings, academics, eager to chase new theories and repudiate their cultural inheritance, have abandoned their role as custodians of knowledge, instead preferring to act as demolition engineers. In the process, they have surrendered music to experimental snobs, melody-averse mathematicians, metronomic pop, and noise.

Music as an Art is a collection of previously published essays fortified with new writing and arranged in two parts: the first examining questions related to the aesthetics of music, and the second providing close readings of individual composers and musical genres. The chapters read independently of one another and range from personal narratives, to a critique of cognitive scientific attempts to understanding music, to discussions of individual works, complete with passages of musical score. The effect of this pushed-together collection of essays is not unlike sitting through a lecture filled with long and interesting tangents that are so long and interesting the listener forgets the point of it all. And naturally, because the book contains reworked and republished material, and because Scruton returns to subjects that he has discussed at length in other works, the book can sound at times like an echo to his regular readership. For example, large sections of the chapter “The Culture of Pop” appeared previously in An Intelligent Person’s Guide to Modern Culture, which was republished again in 2019 under the title Modern Culture. Why the chapter needs to appear in two books is worth asking. But Scruton warns his readers in the second sentence of the book that he’s repeating himself. That said, given Scruton’s erudition, one wishes he had used the space in a new hardcover book published by a major trade publisher to bring his talents to a new subject, or to open a new flank in his attack on those who want to spoil the cultural tradition he so prizes.

Scruton’s argument is built on an assumption of cultural entropy, a weakening of the muscles of tradition, and a loss of a shared memory. If the dilemma he presents us with is true (and he is in many places convincing), then what we need next—and we will have to do this without Sir Roger—is a plan on how to repair this damage. How can we become a listening culture again? Given the ubiquity of pop music and noise in our daily lives, along with our shrunken attention spans, how can we revive the rarified, complex musical language that we’ve lost? If expression in music really is central to the art of music, and if finely tuned artistic expression can shape listeners in a positive way, how do we encourage composers to feel again and to write music that speaks seriously about, and to, the soul?

The reality of the soul is one provocation underlying Music as an Art. Scruton hints that the distance forming between audiences and composers is not merely one of art and aesthetic, but one of spirit. The Western musical tradition has its roots in Christianity, and a post-Christian West might no longer have the cypher that opens the music to us. This is the challenge Scruton roundly presents. Can art exist without its context? If the audience no longer wants the soul-message found in the music, and if composers have fled into the realms of mathematical theory and abstraction (in a sense, pure materiality), then how do philharmonics draw audiences into the concert hall without resorting to gimmicks, like symphonies made of sound effects or kitsch?

Music as an Art will resonate with readers who feel alienated by the art establishment, frustrated by what passes as art, and hopeful that a return to tradition might be possible, no matter how unlikely. It will also serve to remind Scruton’s readers—old and new—of his ease with words, the clarity of his thought, and his intimidating intelligence on so many topics.