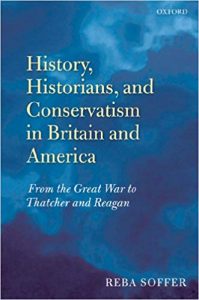 History, Historians, and Conservatism in Britain and America: From the Great War to Thatcher and Reagan
by Reba N. Soffer.
Oxford University Press, 2009.
Hardcover, 345 pages, $125.

Having written several essays on British conservative historians over her long career at California State University, Northridge, Reba Soffer now offers the fruits of a more ambitious project. Here is a wide-ranging study of four British and four American twentieth-century conservative historians who successfully articulated a “coherent and accessible statement of conservative ideas.” The British historians chosen by Soffer were read by popular as well as academic audiences during their lifetime: F. J. C. Hearnshaw, Keith Feiling, Arthur Bryant, and Herbert Butterfield. The American academic historians in her study, Daniel Boorstin and Rowland Berthoff, enjoyed recognition from their peers for a time, while the former could boast a much wider popular readership. Alternatively, the history profession did not consider Russell Kirk and Peter Viereck members of its club since their writings were too popular and polemical. Even so, Soffer believes their conservative work deserves a close examination because of its enormous popularity outside the academy and its significant influence in high places. In short, her central purpose is to discover how their writings justify their conservative causes rather than to assess the reception of their work by professional historians.

While she pays even less attention to the historical accuracy of their claims, Soffer seems to accept in part the view of Lionel Trilling that there was no conservative intellectual tradition in America, until, apparently, Kirk and Viereck invented one. “In America,” she writes, “conservatism had little lineage.” Their achievement was “to introduce conservatism into American political conversations that transcended small groups of intellectuals speaking to each other.” Unlike in Britain where a conservative party long existed, it was only with the Reagan Presidency that an ideological Right became possible. Before the Reagan era, writes Soffer, “American conservatism remained anomalous and marginal,” while conservative politics was characterized by a “mingling of conservative, liberal, and progressive themes.” Kirk and Viereck “independently overcame the lack of an authentic American conservative intellectual legacy by finding a Burkean historical tradition and an identifiable conservative mind in the history of ideas.” The Cold War motivated conservatives to seek a role in American life by uncovering what had remained hidden until then: “an established conservative American tradition that persisted from earlier centuries.” In Soffer’s account, “Conservative intellectual life … began” only in the 1940s with the early writings of Viereck.

The implicit claim that no conservative tradition existed or that no conservative historians practiced their craft before the early 1950s appears to contradict Soffer’s admission that there existed a “conservative, eastern establishment of nineteenth-century aristocratic gentlemen amateurs, who reached their apotheosis in Henry Adams.” We learn then that “evolutionary conservatives who applauded continuity and order” wrote history from the end of the civil war to the beginning of the Progressive era. She further acknowledges that during this time there existed a “slippery” American conservatism of nineteenth century origin that promoted historical mythologies centered “around the image of a rural arcadia within a promised land.” However, the progressives and liberals came to dominate the history profession for the first half of the twentieth century until conservative (and New Left) writers challenged their hegemony. Soffer recalls the year 1950 when the president of the American Historical Association, Samuel Eliot Morrison, called for “a United States history written from a sanely conservative point of view.…” Morrison’s call was ignored by professional historians but taken up by conservatives who “aggressively” set out to “influence national life and culture.”

What Soffer does not ask is why there were so few conservative historians during the first part of the twentieth century. There is no admission that liberal and Progressive history departments or professional associations made it difficult for conservatives to practice their craft. We are told, instead, that conservative and liberal historians “adopted similar principles of historical interpretation,” making it difficult to distinguish between them. Yet if there were conservative historians, why did they not write about America’s conservative past? Are we really to believe that even the pre-1950s conservative historians did not write about it because none existed? The tragic fact is that a profession tasked to record the nation’s history largely ignored the tradition of American conservatism until Kirk and Viereck reclaimed it. The “romantic agrarian conservatism of the 1930s” that Kirk found appealing and Viereck thought nostalgic was rooted in the “rural arcadia” she identifies with nineteenth-century conservatism. Ironically, the appeal of Southern agrarianism cannot be separated from what Soffer identifies as Kirk’s “forward-looking early environmentalism.” When a Progressive historian, even one sympathetic to conservative ideas like Soffer, denies to conservatives their own American tradition, it is sometimes difficult to notice that verytradition when it appears before her eyes.

Besides Viereck, Kirk, Boorstin, and Berthoff, writes Soffer, “there were no other conservative historians until the late 1970s.” Indeed, in an America “where conservatism hardly flourished before the post-war period,” it was Viereck who first declared himself a conservative historian. Furthermore, the conservatism that did exist before Kirk and Viereck imported moderate ideas from England was the “extremist” variety represented by the John Birch Society and the like. In Soffer’s account, conservative beliefs really were, in the words of Lionel Trilling, “irritable mental gestures that seek to resemble ideas.” No doubt, Soffer treats her four American subjects sympathetically, but she does so at the expense of all those conservatives who came before them. (Those who share Soffer’s misperception should consult Robert Crunden’s anthology The Superfluous Men: Conservative Critics of American Culture, 1900–1945.)

Soffer’s choice of American subjects is somewhat curious. While Viereck, Kirk, and Boorstin were the only post-war historians to reach a wide audience, writes Soffer, Berthoff is included in the American quartet not due to his public appeal but because “he proudly and uniquely declared himself ‘a conservative historian’.” Soffer even says that Berthoff “was the only academic historian before the 1980s to declare himself a ‘conservative’ historian.…” There are, however, other self-described conservative academic historians than Berthoff who did not enjoy the same commercial success as Kirk or Boorstin. Academic historians who began their teaching careers before the 1980s include such ubiquitous conservative scholars as Stephen Tonsor and Forrest McDonald, both of whom earned their Ph.D.s in 1955. Soffer mentions neither. Furthermore, by ignoring the American South completely, Soffer does not hear important conservative voices that were by no means invented in the 1950s. A notable example is Frank Lawrence Owsley (1890-1955). He was a distinguished member of the Southern Agrarian circle and a one-time president of the Southern Historical Association who earned his doctorate at Chicago in 1924 and taught at Vanderbilt for three decades. Owsley’s sustained Jeffersonian defense of the South against the disparaging misrepresentations of Northern historians made him a conservative whether or not he identified himself as such. It is undeniably true, however, that before the breakup of the liberal consensus in the 1960s conservative historians found the academic teaching profession inhospitable.

All the conservative historians Soffer does identify deny that conservatism is an ideology. Soffer also recognizes that British and American conservatism was never enshrined in a sacred text or remained immune to changing circumstances in which its principles may be applied differently or even in apparent contradictory ways. Some conservatives are more open to change than others, as illustrated by her comparison of Viereck and Kirk. The definition of conservatism by the former evolved, writes Soffer, while that of the latter “was cast in the late eighteenth and nineteenth centuries.” Indeed, she says, the ideas Kirk expresses in The Conservative Mind “were recycled in everything that he wrote.” At first glance, one might think that Soffer is singling out Kirk for abuse until we read that all these conservative historians “were not original thinkers.” Conservatives know, of course, that originality is not always a virtue. Soffer appears to know, too. What she really dislikes are the neoconservatives who, due to the “debacle” they presided over during the Bush years, have succeeded in making Viereck and Kirk more “resonant within conservative circles searching for a tenable identity.” Indeed, the “recent decline of a neo-conservatism ignorant of its own history” has madepossible a growing interest in the Burkean Toryism of Kirk and to a lesser extent of Viereck. Further evidence of Soffer’s dislike of the neocons can be detected in her discussion of Hearnshaw’s portrayal of the British Empire in the 1920s as a promoter of democracy. She wrote that his enthusiasm became “eerily familiar again since 2002.”

The non-ideological conservatism of her conservative historians appeals to Soffer. Not being a conservative herself, it is comforting for her to see, for instance, how favorably disposed her British historians were toward Chamberlain’s appeasement policy. The Tory prime minister was trying to avoid another Great War and Hearnshaw, Feiling, and especially Bryant, were active supporters. Butterfield’s refusal to become a Germaniphobe before and even during World War II seems to place him in the same lineage as his fellow British historians. Some readers might object to the inclusion of Butterfield, however. At least when it comes to partisan politics, he does not easily fit in the conservative category, as Maurice Cowling, J. C. D. Clark, and Owen Chadwick have all pointed out. One recent biographer, C. T. McIntire, identifies him more closely with Asquith’s Liberal Party. Just because orthodox Christianity kept Butterfield immune from the ideological extremes of his age does not make him a Tory conservative even though he made room in history for the operation of Providence. Berthoff himself was no conventional conservative if his letters to the St. Louis Post Dispatch are any indication. According to sources, some of Berthoff’s colleagues at Washington University considered him a man of the Left, thus raising doubts about Soffer’s categorization of him.

What Soffer is doing here is writing about what she likes in British and American conservatism and subtly objecting to what she does not, whether it be the neoconservative foreign policy of Bush or the libertarian welfare policies she associates with Thatcher and Reagan who, ironically, “omitted the compassionate part of conservatism.” Nevertheless, her treatment is sympathetic and mostly accurate, even if her historical account of American conservatism is flawed in several respects. Readers who know the broad outlines of Anglo-American conservative history will find this study valuable despite its weaknesses. It is well worth pondering the similarities and differences of British and American conservatism to see what we have inherited from our common English tradition. At a time when conservatives are looking for direction, Soffer’s study might yet offer some guidance by familiarizing us with the themes and principles that broadly unite those who call themselves conservatives on both sides of the Atlantic.

John M. Vella is the editor of Crisis Magazine. He is a former managing editor of Modern Age who earned a Master’s in history from Villanova University in 2010.