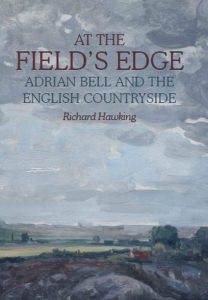 At the Field’s Edge: Adrian Bell and the English Countryside
By Richard Hawking.
The Crowood Press, 2019.
Hardcover, 222 pages, $45.

The name Adrian Bell will be unfamiliar to the great majority of American readers, and even in his native England he seems to be somewhat forgotten among the general reading public, even though his books were quite popular from the 1930s through the late 50s. This unfortunate situation is what Richard Hawking seeks to correct in At the Field’s Edge, the first book-length study of Bell’s work. What emerges from Hawking’s analysis is a portrait of a writer who was both a fine prose stylist and an intelligent and passionate advocate for the small farmer and the accompanying rural life.

In his introduction Hawking lays out the basics of Bell’s life. Born in 1901 London into an educated middle-class family, Bell first pursued a career in journalism, but soon became disillusioned with city life. At the age of nineteen he pulled up his urban roots and moved to rural Suffolk with a view to learning farming. He first apprenticed, then bought his own small farm, a story told in his once-popular rural trilogy, Corduroy, Silver Ley, and The Cherry Tree. For the next fifty years he wrote, and often farmed, until his death in 1980.

The book then proceeds with a brief history of English farming and the politics surrounding it, starting in the early nineteenth century. For the American reader, this short chapter is important, as it serves to place Bell’s writing both historically and politically. Hawking then moves on to examine Bell’s works chronologically, starting with the “Suffolk trilogy” mentioned above and ending with his last writing in the 1970s.

To anyone who has read Wendell Berry, the story that Bell’s work tells will sound remarkably familiar. It is, in fact, not altogether incorrect to view Adrian Bell as a sort of English Berry, albeit one from an earlier generation. This difference in time is itself of interest, however. While Berry was born in 1934 and began writing in the early 1960s, Bell published his first book in 1930. Both writers tell similar stories (Hawking actually quotes Berry a few times to provide an American parallel), but while Berry writes about many of the cultural developments of the mid-century as history, Bell was able to record and comment upon them as they occurred. The result is something very much like Berry’s work, but written in real time.

In fact, one of the most fascinating things about At the Field’s Edge is how markedly similar the twentieth-century English and American agricultural stories are, right down to the time frames. The push to industrialize agriculture, the government programs that disincentivized small-scale farming, the corporate and state endeavors to move farmers off the land and into industrial wage work—it’s all here, and of course it is in no way coincidental. Writer and Christopher Lasch biographer Eric Miller told me of a talk he heard by Indian writer-activist Vandana Shiva that tells a very similar story. Miller suggests that it would be revealing to gather the stories of farmer-writers from around the world and show via their writings the problems they have witnessed with the industrialization of agriculture. If the parallels between Bell and Berry are any indication this wouid indeed be an important and eye-opening project.

Of course, At the Field’s Edge will have failed if it does not prompt its readers to look at Adrian Bell’s work itself. But since Richard Hawking does such a fine job in discussing virtually all of Bell’s books except the fiction, in the process providing both summaries and excerpts, the reader should have no excuse not to pursue the reading of Bell’s own work. Hawking has done twenty-first century readers a great service by bringing the work of Adrian Bell back to our attention. He is a writer who has much to say to our current cultural, agricultural, and ecological circumstances.