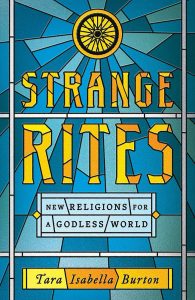 Bookman readers are likely to know Tara Isabella Burton from her op-ed in the New York Times entitled “Christianity Gets Weird.” It was a sympathetic look at millennial and Gen-Z Christians who look to the ancient and medieval forms of Christian prayer and art and politics for spiritual fulfillment and who seek to mix those ancient and medieval forms in the contemporary world. She has also written a novel, Social Creature. Burton has written for Vox.com and is currently a contributing editor at The American Interest. Strange Rites would appear to be the book she has been wanting to write. It chimes with the Times piece, and it develops some arguments she made for Vox (where I first encountered her writing). Burton has a D.Phil from Oxford, so her scholarly credentials are secure.

I came to this book wanting to like it. The world Burton describes is one that my students inhabit or at least are familiar with. I teach at a large Catholic university in Chicago. Most of the students who take classes with me would consider themselves “spiritual but not religious.” And most of the students who identify themselves as Catholics or Protestants, Jews or Muslims, do not see their faith lives at all connected to their intellectual lives. They are Catholic because, for example, their families are or they enjoy the community. But they are also perfectly willing to mix their “traditional” religious beliefs with other forms of spiritual nourishment. I was looking forward to learning more.

I came away disappointed. Before getting to the critique, however, allow me to review what I take the book’s strengths to be. Burton reminds us that everyone worships. Her chapters discuss how Harry Potter fandom, wellness culture, magic, sexual utopianism, social justice activism, techno-utopianism, and the alt-right all function for their practitioners as religions. Although Burton does not say this exactly, her book shows that there is no such thing as “spiritual but not religious.” Everyone longs for community and ritual and meaning, and some find it in SoulCycle or on Reddit. It’s clear that Burton has her finger on the contemporary Zeitgeist. And when she includes her own experience (as she does in the introduction), the book has a particular force: it’s clear Burton believes these issues matter personally as well as sociologically. She can translate the patois of any number of niche communities to a broader audience.

This leads me to my first critique of the book. It is not clear to me what audience Burton is addressing. Perhaps the audience was the same as her Times op-eds, clueless “dads” who wonder why their kids don’t go to church but are ascetics when it comes to their workouts, or who find value in their multi-player video games. Little in the book was new to me, and little of it would be new to my students. Even my friends who do SoulCycle or CrossFit (the latter of which she curiously does not discuss) at least jokingly refer to their workouts and their community as a religion. If you read Peter Thiel or Ray Kurzweil or any number of other techno-utopians, you’ll see how explicitly they see their movement as an improvement on “traditional” religious belief.

Strange Rites is not, and not intended to be, a scholarly book. The vast majority of footnotes refer to websites. There is no discussion of other authors who have written similar books on the topic. (These range from the scholarly to the popular.) Burton could have mined interesting discussions of secularism and post-secularism in advancing her argument, but she doesn’t. But the book is not quite a news book either. For starters, some of it already seems dated. The recent protests against police brutality and racial injustice put her discussion of social justice activism in a new light. Neither Bernie Sanders nor Elizabeth Warren is the Democratic nominee for President. Although a discussion of the philosophical foundations (such as they are) of the alt-right would be welcome, references to Trump supporters on Reddit seems increasingly historical at this point.

Whether the book is scholarly or not, or meant to be a report from the religious front lines or a dispassionate assessment, is not as important to me as defining the terms that form the backbone of the book. And now we come to the second and most important critique of the book. Let’s start with the title: Strange Rites: New Religions for a Godless World. I would have expected that a book with such a title include discussions of rites and rituals, offer a clear and thorough definition of religion, and try to define what it meant by “God” so that the reader would have a context for “godless.”

The most important word here is clearly “religion.” In the first chapter Burton ignores the word God completely and focuses on the theories of Emile Durkheim, Peter Berger, and Clifford Gertz on the definition of religion. These three scholars would all merit attention in a Religion 101 course. That Religion 101 course would include other voices as well, voices that explored the psychology of religious belief, the history of the word “religion,” the use of “religion” in social order and in philosophical and scientific explanation. Burton never argues why these three in particular are the keys to understanding the issue. Burton does note that the three scholars argue that religion provides “meaning, purpose, community, and ritual.” (Suffice to say that the three authors provide a much more nuanced discussion than this.) If we take that seriously, we automatically recognize that almost anything can be a religion. I mean that quite seriously. The Mets give some of their fans meaning, purpose, community, and ritual. So does the stock market, and the military, and college residential life.

Here’s the question. If this is the definition of religion on offer, why choose what Burton has chosen? This is my guess and it relates to her potential audience. These strange rites are the ones Burton finds interesting because they are the ones that she has encountered. Fair enough. I don’t know Burton personally, but I think we have some friends in common and travel in similar circles. We both have advanced Oxbridge degrees. It just so happens that the topics Burton discusses are the topics that upper middle class people with degrees from selective colleges participate in. They are also the things that Vox readers find interesting. This is all to say that Strange Rites is pitched to an audience of a particular social class. It would be helpful, though, if she were upfront about that. Burton’s book would have been stronger if she had noted how all these movements had a particular post-Christian stance. She does offer a brief history of what she calls “intuitional” religion in chapter two, but the movements she describes make much more sense in terms of reactions against Christianity. The strange rites in the book are strange rites that come from the backdrop of middle-class white Christianity in the United States.

Burton’s contribution to the literature is her use of the term “Remixed.” Even here, though, I found the term more confusing than enlightening. Her point is that people today take a bit from different traditions. Again, fair enough. Anyone who has studied religious traditions knows there is no such thing as a pure tradition that doesn’t borrow from others. But Burton’s use of the term is odd. It’s not clear if she thinks that the people are Remixed or if the traditions are. She usually uses the term to refer to people, but she doesn’t explain how the act of remixing traditions forms the person who is doing the remixing. This is a shame because it’s a useful image, and it’s one with an interesting history in popular culture, which is Burton’s wheelhouse. A good editor should have helped Burton clarify her thoughts on this, and perhaps that would be a fit subject for a sequel.

I have no doubt that Tara Isabella Burton will continue to write provocative pieces that remind us that human beings are, by nature, creatures that worship and that the way they worship takes many and various forms. Scholar Mark C. Taylor has noted that religion is most interesting where it’s least obvious. Burton makes religious belief and ritual more obvious but keeps it interesting. I hope she gives herself more time to flesh out her arguments and clarify her concepts for her next book.

Scott D. Moringiello is an associate professor in the Department of Catholic Studies at DePaul University in Chicago.