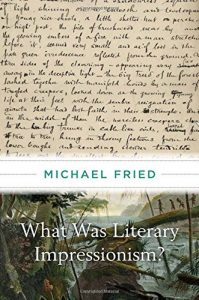 Impressionism arose in late-nineteenth century European and American literary art in response to a crisis in interpretation, a crisis in which writers could no longer depend on the very language that defined their art. The popularity of the nineteenth-century realist novel was due largely to its fidelity to the social world it depicted, the ways of life of typical individuals, and their relations to society as a whole. Depicting this relation is the main point of realism in literary art, from the triple-decker novels by English Victorians to the “scrupulous meanness” of early modernists such as Ernest Hemingway, Sherwood Anderson, and the early James Joyce (the quoted phrase is Joyce’s own, describing the stories in Dubliners). Naturalism, which combines the representational mandate of realism (which is to reflect the individual’s relation to society) with a non-style of seemingly unedited documentary coverage, arose in the late nineteenth century, in response to a growing concern that realist fiction was unable to give a total picture of society, unable to uncover its ills and expose its bad actors, as the French writer Émile Zola tried to do in a series of novels about the dark side of French society. In America, Theodore Dreiser and Frank Norris produced similar exposés, which focused on the individual’s increasingly antagonist relation to a society whose destructive forces, like nature itself, seemed all but inevitable.

As a graduate student in the 1980s, I read Zola and the U.S. naturalists and admired their attempts to make sense of society by attempting to solve the problem of representation posed by realism, that is, the problem of representing society and social relations faithfully in prose. If naturalism questioned the ability of realist writers to get at what was truly happening in society, literary impressionism questioned literature’s ability to represent anything beyond the subjective experience of the writer. As Michael Fried shows in his latest book, What Was Literary Impressionism? this development is largely a consequence of a failure of interpretation, which, as I was discovering in my theory classes, was in fact a triumph over oppressive rationality.

According to Joseph Conrad, one of the most influential impressionist novelists, the most for which we can hope from modern storytellers is the nebulous coherence and unreliability of dreams. Though Conrad insisted that his task was “to make you hear, to make you feel … before all, to make you see,” the meaning of what we hear, feel and, before all, see was not always clear. The problem raised by literary impressionism in such novels as Conrad’s Lord Jim and the works examined in Fried’s book is one of interpretation. If we follow Conrad, the reality of what we experience, what we see, is not in question; what matters is the inability to perceive and interpret that reality in a way that confirms something beyond the perceiver’s own narrow experience. The anxiety that follows upon the realization that one’s perspective on the world is singular and fungible bears all the hallmarks of alienation—from society, to be sure, but also from traditional ways of dealing with it.

Fried’s book captures this anxiety and links it to the way writers in the late-nineteenth and early-twentieth centuries were beginning to treat this new perspectivism. He is less interested, however, in the idea of an impressionistic cast of mind represented in literary texts. His main interests lie in how impressionist writers make the materiality of writing a theme in their works. Just as impressionist painting draws the viewer’s attention to the actual paint on the canvas, so impressionist fiction invites the reader to consider more closely “the writer’s relation to the act and circumstances of writing.” In this way, the problem of experience and perception, particularly its limitations, becomes one with the subject matter of the impressionist text.

Fried makes this point forcefully in his reading of works by Stephen Crane, Conrad, Ford Madox Ford, H. G. Wells, and a number of lesser-known writers. Central to his argument is Crane’s story, “The Upturned Face,” which provides an allegory for an “impressionist problematic grounded in the writer’s relation to the act and circumstances of writing.” Crane’s story is about the alienating effects of modern life, for at its heart is a drowned man, whose upturned face testifies to the fleeting reality of the modern self. But more than this, according to Fried, that face serves as “singularly concentrated metaphor[] for the sheets of writing paper that the author had before him.”

This period of early modernist innovation, when impressionist writers sought to show us how little certain knowledge the author has to offer to the reader beyond the narrator’s (or character’s) own experience, seems strikingly like our own. It was a period in which novelists struggled to accommodate inherited languages and styles, which were utterly inadequate to describe life in an increasingly globalized and modernized world. Conrad’s impressionist vision, conveyed by notoriously unreliable seafaring storytellers, is emphatic about our inability to know anything as true or even factual. If Crane depicts, in images of upturned faces, “the act of writing in all its scriptiveness,” Conrad explores, through similar images, a primeval blankness of meaning. Authors like Conrad and Crane do not discover so much as restore this blankness, which “is at once the precondition for and the product of a certain project of writing.”

On this foundation, a short but intense period of fiction writing produced a canon of works emblematic of literary impressionism as Fried understands it, that is, a mode of writing that takes into account the experience of writing, of making sense of what we know. In H. G. Wells’s The Invisible Man, for example, the idea of “scriptural transparency” struggles against the “ontological instability of the printed text.” We can see right through our language, Wells seems to say, but if we look closely, we lose track of what exactly constitutes that language: is the man also the bandages that make him visible? In quite another way, W. H. Hudson, a “writer’s writer” admired by many of his more illustrious compeers, produced an “all but ‘invisible’ prose style” that amounts to a “radical denial of the materiality of writing.” When you read Hudson, no problems of meaning arise.

Fried celebrates the very “writtenness” of the books he analyzes, seeing in them a dialectical process of writing and “unwriting” that both promises and withholds meaning. Conrad records this dialectic in late works such as The Secret Agent and Under Western Eyes, which are obsessed with the material surface of written language. These texts, in Fried’s view, represent the last gasp of literary impressionism, and so they make the point about writing and meaning, knowledge and interpretation, through the use of revolutionary violence. The protagonist of The Secret Agent, Stevie, is a half-witted man who sees things only in their overt reality. Everything to him is obvious and simple. In Fried’s terms, he practices a “rigorously materialist version of Conradian impressionism” that stops at the surfaces of things; the brute materiality of the story (Stevie is blown to bits) is a figure for its “writtenness.” In Under Western Eyes, Conrad emphasizes the problems of misreading and misperception, offering characters with a “layered intensity of vision, a kind of writerly and readerly absorption.” These characters interpret and record the world around them and then produce a “play of figures and images” that links espionage and writing in a powerful message about knowledge under political pressure.

The question posed in Fried’s title leads, throughout this volume, to other questions: why did impressionism arise and why did it stop being a major influence in Western literary art? What is the value for us today of this short period of literary unrest, when perception and interpretation are turned on their heads and literature struggles to grasp a new artistic method and purpose? Literary impressionism persists, one could argue, because we are now, more than ever, confronted with the limits of our knowledge and the certainty of our interpretations. But rather than the upturned face of a corpse, we see today the grinning face of an avatar.

Gregory Castle teaches literature and theory at Arizona State University. His publications include Modernism and the Celtic Revival, Reading the Modernist Bildungsroman, Literary Theory Handbook, A History of the Modernist Novel, and A History of Irish Modernism, in addition to many essays on Irish and modernist writers