Faith and Works and the Novel 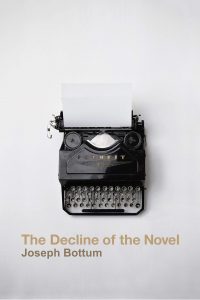 In this wide-ranging essay, Joseph Bottum has managed to turn a stale topic—the death of the novel—into fresh cultural criticism, arguing that the genre’s decline is symptomatic of a wider social and religious crisis. He builds on an observation that seems undeniable, even if, like me, you wish you could disagree with it: no novels that could be described as “mandatory reading” have been published in at least two decades. Back in the late 1980s you might have thought twice before walking into a literary cocktail party without having read Tom Wolfe’s The Bonfire of the Vanities. Today, as Bottum points out, the phrase “literary cocktail party” refers to a social ritual that’s verging on extinction.

Bottum looks back on the novel’s prime without nostalgia, yet his essay is plainly driven by an abiding love for the form. It stitches together material from a number of previously published articles, including a brilliant 2015 provocation, “The Novel as Protestant Art,” from Books & Culture. The seams are sometimes visible, but the book’s overall structure is clean and compact, its style lively. Early sections lay out what the novel is (“perhaps the major art form … of the modern world”), what it aimed to do (describe in detail, and even remedy, “the crisis of … modern selves”), and how it lost its way (succumbing, along with Western culture as a whole, to “terminal doubt about its own progress”). Then, in chapters on Walter Scott, Charles Dickens, Thomas Mann, and Tom Wolfe, Bottum sketches a brief, idiosyncratic history of the genre, offering thumbnails on dozens if not hundreds of other authors and works as he goes, from Gogol’s Taras Bulba to Charles Frazier’s 1997 throwback to the golden age of “middlebrow” fiction, Cold Mountain. All of this is tied together by a big, bold thesis about the novel’s Protestant nature.

For Bottum, the genre must be understood against the backdrop of the Reformation. Protestantism’s “stripping of the altars,” he argues, led to modernity’s interior turn, the “crisis of the self.” The exterior world was denuded of meaning, any sense of supernatural vibrations gradually silenced. The novel, “wrapped in very Protestant clothing,” emerged to deal with this predicament. Its cultural purpose was to foster “re-enchantment,” first by showing the modern self grappling with its contradictions, and then by attempting, somehow, to resolve them.

Ultimately, for Bottum, the novel is “Pilgrim’s Progress rewritten in self-consciousness”—in other words, the “story of the individual soul” striving to “understand its salvation and achieve its sanctification.” We see this in classics such as Pride and Prejudice (Bottum recalls Elizabeth Bennett’s clarifying recognition: “Till this moment I never knew myself”) or, more than half a century earlier, Clarissa, with its heroine’s quest to match her self-understanding to the “virtuous pattern of salvation.” As for Defoe’s Robinson Crusoe, for Bottum it is “a deeply Protestant book about the great journey, the only metaphysically true story, of the individual soul struggling with itself in this world that God, in his Providence, has made.”

As evidence of this, Bottum digs up an “unremembered and unmourned” nineteenth-century work, The Adventures of Owen Evans, the Catholic Crusoe, by William Henry Anderdon. In contrast to the hero of Defoe’s classic, Anderdon’s main character is stranded as part of a group. “More than plot variance is at stake here,” writes Bottum. The collective “derives from—and expresses—Anderdon’s Catholic sense of God’s work not only in the individual but in the community.” A priest is a key character, work a means of salvific suffering. The novel ends with apocalypse: a volcanic eruption destroys the island, wiping out any possibility of happily-ever-after closure in the here and now.

While Catholic novelists can occupy territory, then, the ground itself is Protestant. Indeed, the Catholic novel, Bottum says, is ultimately “at war with its own art form,” constitutionally allergic to the heart-warming denouements and marriage plots of Austen or Dickens. To write an explicitly Protestant novel, on the other hand, is a redundant act. The genre is latently Protestant already. Such novels—boasting titles like In His Steps: “What Would Jesus Do?”—have a tendency to lapse into didactic sermonizing.

Bottum’s chapter on Walter Scott takes these ideas out for a test drive. In Waverly (1814), the eponymous hero, an English gentleman, travels to Scotland and briefly joins the Jacobite uprising. The Stuart cause lets Waverly experience the metaphysical thickness of ancient allegiances, as well as passionate love for an alluring Catholic woman, before he returns to England and a more decorous match. Scott offers historical memory as salve, wafting the incense of the tribal past into the forward-marching present.

This ethic of the museum ultimately fails, Bottum says. Subsequent solutions to the modern crisis, although fleetingly plausible, would prove just as inadequate. And before long the very idea of a solution would itself be rejected. Although Bottum praises Tom Wolfe’s irony and Zola-esque ambition, the author’s social realism, he says, lacks a “deeper coherence.” True, in 2001’s A Man in Full, one character reads Stoic philosophy. However, “Stoicism simply isn’t the answer to the problems the author has set himself.” Wolfe had no vision of the good life, and so couldn’t end his novels.

His case turns out to be exemplary. The blame for plummeting fiction sales has been pinned on the internet and cell phones, on structural changes in publishing, on the ill effects of the MFA-industrial complex. Bottum instead ascribes it to “a failure of nerve not in art but in metaphysics.” Today’s novelists no longer believe “there exists a deeper structure of morality and manners that can be discerned by the novel.” As a result, fewer readers care for so-called literary fiction. They have turned to children’s lit (Harry Potter), Westerns, or graphic novels that offer moral clarity and energetic storytelling.

The metaphysical flatness of many contemporary novels stands in contrast to what Bottum, citing Ian Watt’s 1957 The Rise of the Novel, says about Jane Austen. She brought the novel to aesthetic maturity by combining minute observation of daily life with a “comic and objective point of view.” Melding the specific and the lofty, Bottum argues, is “Austen’s genius,” and that of the modern novel more generally. Virginia Woolf made a similar case for Austen’s eminence in The Common Reader:

Her fool is a fool, her snob is a snob, because he departs from the model of sanity and sense which she has in mind, and conveys to us unmistakably even while she makes us laugh. Never did any novelist make more use of an impeccable sense of human values. It is against the disc of an unerring heart, an unfailing good taste, an almost stern morality, that she shows up those deviations from kindness, truth, and sincerity which are among the most delightful things in English literature.

To write great novels, in other words, takes something more than talent and craft. And that something is harder to come by in today’s world than at any time since the novel’s inception. “Only if we are secure in our beliefs can we see the comical side of the universe,” Flannery O’Connor wrote. “One reason a great deal of contemporary fiction is humorless is because so many of these writers are relativists and have to be continually justifying the actions of their characters on a sliding scale of values.” (Of course, sometimes the sliding scale gets stuck. Then, instead of a moral vacuum, it produces heavy-handed satire or, worse still, what Helen Andrews has called “the modern progressive equivalent of old-style socialist realism.”)

Today, as the “nones” rise and neopagan anthropology gains in strength, Christian orthodoxy of any stripe is on the wane. Bottum persuasively connects this to the novel’s shrinking cultural influence. When he subsumes the genre more narrowly to Protestantism, and links its decline specifically to that of the mainline, he is to my mind less convincing. There’s clearly something to the idea that the novel emerged to entertain and instruct a European middle class saturated—even in confessionally Catholic countries like France—with Protestant values. But it’s the sort of sweeping argument that works best if you can make theory coincide neatly with literary history. This Bottum can’t quite pull off. He’s forced into affirming, for example, that Don Quixote is merely a “door” into the novel, scarcely belonging to the mansion we enter through it. Instead of springing to life in Golden Age Spain or in the France of Rabelais, he says, the novel “exploded out of eighteenth-century England.” Both points are something of a stretch, or at least far from easy to prove.

To defend them, he leans heavily on Defoe’s centrality to the genre. But this, too, is arguable. In ways big and small, nearly all subsequent novels take inspiration from Quixote. By comparison, Robinson Crusoe (as Bottum himself acknowledges) had relatively little influence on the English novel. And although Crusoe may indeed stand out as “Protestant,” it’s unclear that depicting an individual soul’s sanctifying journey is itself an essentially Protestant move—think, for example, of The Divine Comedy, which recounts the spiritual transformation of an individual (if archetypal) pilgrim, or of Augustine’s Confessions, or again of St. Thérèse’s Story of a Soul.

These are quibbles, and to Bottum’s credit he has himself anticipated and sought to preemptively deflect most of them. Harder to argue with is his overarching point that the novel’s incarnational way of seeing is on the way out, its prestige dwindling along with its readership.

But the genre isn’t dead yet. People still write (and sometimes even read) literary novels in the tradition of Cervantes, Austen, and Proust. And just a handful of compelling works could reinvigorate the form. As Dana Gioia has pointed out in his rallying cries to Catholic writers, Christians of an orthodox bent are singularly well equipped to overcome the “failure of nerve” that Bottum diagnoses as the deep cause of our cultural decline. Faith alone is not enough (talent and skill are the first requirements). Still, one takeaway from The Decline of the Novel is that, where literature is concerned, it’s not a bad place to start.