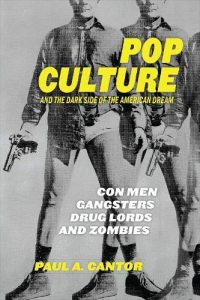 Pop Culture and the Dark Side of the American Dream: Con Men, Gangsters, Drug Lords, and Zombies
by Paul A. Cantor
University Press of Kentucky, 2019.
Hardcover, 224 pages, $40.

Anna Sorokin, an émigré fashion student of modest means, became a very wealthy woman simply by pretending to be one. Her brief life of the rich and famous abruptly crashed down when she racked up too much debt, but not before she successfully executed a series of con-jobs that netted her hundreds of thousands of dollars in cash and left friends and associates with bills in the tens of thousands of dollars. After her conviction on three counts of grand larceny and her sentencing to four to twelve years in prison, Ms. Sorokin expressed to The New York Times that she was not sorry for her actions and would, given the chance, do it all over again. And she will be able to do so in the form of a Netflix biopic written by Shonda Rhimes, creator of Grey’s Anatomy and Scandal.

Sorokin’s likely to be enduring fame testifies to the significance of one of Paul Cantor’s central contentions in his most recent monograph, Popular Culture and the Dark Side of the American Dream, which is that narratives of self-making cast a long shadow over American pop-culture, particularly where riches are concerned. Thus the blurry line between legitimate business and criminal activity forms a key structuring element for many of our pop-culture narratives. From the con-men and imposters who populate Mark Twain’s Huckleberry Finn to the fragile and duplicitous feudal bureaucracies of The Walking Dead, Cantor offers his reader a selection of American pop-literature and film from 1885 to the present in which identity is a mask all too easily put on or taken off as needed.

The masking, or shifting identities, that reappear throughout Cantor’s book correlate to what he identifies as an ordering bifurcation in the literature of the United States. In the introduction Cantor writes that “[h]ere is perhaps the deepest fault line in the American Dream. American literature has almost from the beginning been torn between visions of tranquil domestic life and visions of the Wild West in all its incarnations.” The tension between the world of ordered legality and the world of violent liberty haunts Cantor’s readings of his primary texts.

To begin, Cantor addresses Mark Twain’s Huckleberry Finn as a meditation on the consequences of the ostensibly classless society in the United States. In Twain’s novel, “democracy … tears down aristocratic hierarchies, introducing freedom and social mobility and thereby liberating human energies.… The democratic world Twain portrays in Huckleberry Finn is filled with imposters.” Cantor’s concerns in this chapter are self-consciously Tocquevillian as he inquires after the fate of the social sphere when democracy threatens to wholly collapse the social into the political. The reading of Twain offered by Cantor suggests that part of the answer lies in exorcizing the ghosts of Old World aristocracy that haunt democratic egalitarianism. To this end, two of Huckleberry Finn’s most nefarious imposters bill themselves a king and duke as part of scheme to defraud the local population before skipping town. Bedazzled by the con-men’s titles and affectations, the hapless Americans allow themselves to be taken in. Cantor reads Huck and Jim as the antidotes to this American gullibility. Huck understands the imposter king and duke to be no different than an Old World king and duke: men who affect fancy dress and formal language in order to exert power. For Huck, while democracy opens the floodgates to imposters, it also asserts the fundamental sameness off all people, thus allowing Huck to see through the king and duke’s scams: all aristocrats, nobly born or not, are imposters.

The temptation to be someone whom one is not persists into the second chapter, where Cantor analyses comedian W. C. Fields as a microcosm of the American desire to assume a new and better identity. The essay is largely biographical in nature, but serves to demonstrate the American public’s enduring fascination with shifting identities in the form of Field’s frequent con-man and accidental hero routines. The most compelling portion of the chapter is Cantor’s account of Fields’s bid for the presidency, when “[w]ith show business in his blood, Fields intuited something about democratic politics in America—that it has many links to world of entertainment and the mass media.” That Fields was the first to notice the resonance between politics and entertainment is unlikely (especially given the popularity of lecturers and preachers in the nineteenth-century United States), but regardless, his presidential run in 1940 enabled him to take his act on a high-profile tour that mocked the federal government’s unaccountability and authoritarian tendencies, especially the failed policy of Prohibition.

Far and away Cantor’s best material arrives in the third chapter that addresses Francis Ford Coppola’s The Godfather I & II. Cantor reads the Godfather films as immigrant narratives that encapsulate the collision of Old World (European) with New World (American) values. The chapter’s central concern is the anxiety that “many of the core virtues that make a good American paradoxically turns out to make a good criminal as well.” This Janus-faced nature of American virtues forms another of Cantor’s primary concerns, and throughout his book there’s a lurking sense that American democracy coexists entirely too comfortably with imposters and con-men. While not explicitly comparing Huckleberry Finn, W. C. Fields, and the Godfather films, Cantor’s juxtaposition of them suggests that Coppola’s immigrant mafiosi capitalize on the same social ambiguity as do Huckleberry Finn’s king and duke and the imposter presidential candidate W. C. Fields. Just as a good imposter might make a good king or a good comedian might make a good politician, a good immigrant might make a good mafia Don.

In the chapter on the Godfather films and in the two chapters that follow, the drama that Cantor documents cuts deeper than a simple indictment of American ambition or greed, and expands into a consideration of the rule of law. Cantor opens his Godfather chapter by recounting the first part of The Godfather I, where a distraught father, Amerigo Bonasera appeals to Don Corleone to mete out justice for his daughter’s rape. The Don agrees and Bonasera offers cash in payment, which the Don refuses by instructing Bonasera to “[a]ccept this justice as a gift.” Thus, it is in the Godfather chapter that more questions begin to emerge: what is there to recommend the United States over and above the Old World Sicilian justice? Why ought not one desire the violent efficiency of Don Corleone’s mafia soldiers in an instance where the U.S. justice system has miserably failed?

The fourth chapter, engaging with the television series Breaking Bad, persists in examining the allure of criminality masked as Old World honor. An average middle-class American can as well find themselves seduced by the power that accompanies violence. The criminal underworld enables the mild-mannered schoolteacher Walter White to become “the implacable Heisenberg … Once he becomes Heisenberg, he is no longer a coward. His transformation is about as magical as that of Clark Kent into Superman.” Drug trafficking gives Walter White, the suburban dad, the chance to be someone. Cantor uses Breaking Bad to raise the question of whether or not heroism is possible in a nation of laws. In the case of Walter White Cantor answers yes, but with the caveat that it can only be the tragic anti-heroism of Shakespeare’s Macbeth.

Where the nation of laws inhibits heroism, the post-nation of no laws necessitates it. The final chapter, on the television series The Walking Dead, begins to offer some answers as to why Americans might find themselves tempted to become imposters. In particular, The Walking Dead offers the opportunity to envision the radical restructuring of the political and the social. In Cantor’s words, “[l]ooking at the world around them, Americans may be excused for concluding that the financial-medical-educational complex, that was supposed to help them achieve their dreams, has failed them. Perhaps life might be easier and more fulfilling without these institutions.”

Cantor goes on to interpret The Walking Dead (and other recent post-apocalyptic television series) as a paradoxical conservative-revolutionary narrative, where, counter to Rousseau, the state of nature is not a paradise but a feudal battleground in which partisans engage in a bloody working-out of the best mode of governance. The Walking Dead places its characters in a situation where, “[n]o longer locked into institutions already in place, the public gets to assess their value and see if it really needs them or might be better off under other arrangements or perhaps no government at all.” This narrative thought-experiment leads Cantor to observe that “[z]ombie tales and other apocalyptic scenarios turn out to be a way of imaginatively reopening the frontier in twenty-first-century popular culture.” In this way, a new possible definition of American pop-culture as a frontier-oriented genre emerges from Cantor’s book: the liminal space in which persons are allowed—like Mark Twain and his characters—to reinvent themselves, or forced—like The Walking Dead’s refugees—to tread the razor’s edge between a good American and a good criminal.

Harrison F. Dietzman is a PhD candidate in the English Department at the University of Iowa. His writing—scholarly and otherwise—has appeared in or is forthcoming from Emily Dickinson Journal, Religion & Literature, Configurations, Guernica, and elsewhere.