Federalism Against the Slave Power 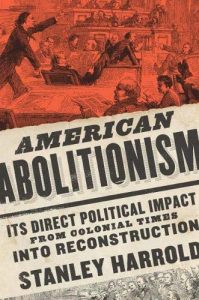 The New York Times Magazine recently commemorated the four hundredth anniversary of the landing of the first ship that carried enslaved people to British America. The magazine concluded, “No aspect of the country that would be formed here has been untouched by the years of slavery that followed.” One feature of American life profoundly shaped by slavery has been organized protest. As slaveholders expanded both territorial and political power during the eighteenth and nineteenth centuries, so did organizations committed to emancipating those held in bondage. Stanley Harrold’s American Abolitionism studies how abolitionists worked within the American system of government to end the legal practice of slavery. He has written an important political history of abolitionism that shows how democratic protest can lead to vital reforms within the confines of the Constitution. Representative government can enact fundamental change.

Many historians have characterized antislavery leaders as apolitical, but Harrold portrays American abolitionists as savvy political operators who understood how to petition, lobby, and manipulate the levers of representative government to achieve their aim of universal freedom. Beginning in the colonial period and ending the with the dissolution of the American Antislavery Society in 1870, Harrold writes, “Abolitionist political efforts, stretching over 150 years from the colonial era through the early national period into the Civil War made universal legal emancipation possible at the war’s conclusion. This would not have happened had abolitionists confined their efforts only to changing popular opinion through moral suasion or independent engagement in electoral politics.”

Organized protest succeeds when it aims at shaping power, and the antislavery movement proved to be no different from other successful reform efforts throughout American history. Although it has become fashionable to focus mostly on resistance movements outside of the political arena, American Abolitionism reminds us that what ended slavery in the United States were votes: votes for Abraham Lincoln in 1860 and 1864, votes in the House and Senate both during and after the war, and votes to propose and ratify the Thirteenth, Fourteenth, and Fifteenth Amendments. These votes, cast many times over several elections and congressional sessions, sometimes needing a supermajority, all occurred within the constitutional framework and represented the sovereign will of the people. Abolitionists used democracy against the proslavery movement, and in doing so, they legitimized emancipation as a mainstream political reform movement rather than a revolutionary act.

American Abolitionism also demonstrates how successful reform movements are first grounded in local activism. Harrold begins his study of political abolitionism in 1688, discussing how colonial Quakers lobbied against slavery and the slave trade, using the right to petition, “a political tactic entrenched in English constitutionalism,” to make their voices heard by decision-makers, first at their own meetings, which helped organize the antislavery movement, then in colonial legislatures across Pennsylvania and New England. As the American colonies transformed themselves into states following independence, the Quakers, led by dynamic and outspoken leaders such as Anthony Benezet, established the Pennsylvania Abolition Society with the belief that government would be a crucial ally in gradually ending human bondage in the United States. This ultimately proved wise.

Although some leaders of the antislavery movement called the Constitution a “covenant with death” and eschewed voting in elections, abolitionists used the American political rights against Slave Power. They often employed the freedoms granted by the Bill of Rights to cause overreaction from slaveholders, which often cleaved them from northern allies tolerant of black bondage. Protected by federalism, which prevented planter politicians from crushing the nascent antislavery movement with the power of the national government, “the pioneering political tactics of Quaker abolitionists” made slaveholding the “peculiar institution” of the South. The successful creation of “free states” during the end of the eighteenth century granted abolitionism a firm footing to fight slavery in national politics during the middle of the nineteenth century.

As sectional tensions over slavery increased during the 1820s and 1830s, abolitionists created a “semi-permanent” lobbying interest in Washington, D.C. Like activist organizations today, the Abolitionist Lobby identified allies who could give them a voice in Congress, built press organs to help spread their message in both D.C. and across the country, and sought small victories that fueled efforts towards achieving the ultimate ambition of ridding the United States of slavery. American Abolitionism collects those small victories into one place, showing how abolitionist political activism succeeded over time to defeat the most entrenched special interest in antebellum America.

The work done with John Quincy Adams during his time in the House of Representatives may best demonstrate the successful lobbying and political activism of the abolitionists. When Quincy first entered the House in 1831, he “shocked slavery’s strongest opponents” by not taking up their mantle; instead, he continued avoiding the issue as he had during his presidency. After years of lobbying, however, abolitionists convinced Quincy to become a fervent voice in Washington for the antislavery movement, especially for their right to petition Congress. Bolstered by abolitionists who gave him encouragement, helped him with speeches and strategy, and offered him support back home, Quincy fought battles no one else could, wielding the respect garnered from being a former president, his personal connection to the founding, and personal brilliance as a rhetorician like a club against the Slave Power.

The antislavery successes won by John Quincy Adams in Congress proved to northern politicians that they could challenge powerful slaveholders and survive. By the late 1840s, many abolitionists recognized that politics was an essential ingredient for emancipation, and during the 1850s, Harrold concludes that abolitionist politicking made the difference: “Their encouragement of antislavery congressmen to criticize the Slave Power, slavery expansion, and on occasion slavery itself had a major role in proslavery defensiveness and increased sectional tensions,” which sparked civil war and led to the freeing of millions of black Americans.

Success, however, had its cost. American Abolitionism documents well in its final chapters how a political coalition forged by an opposition to slavery failed to agree on how to build on its own success. The political pact abolitionists formed with politicians to defeat slaveholders also corroded the idealism that drove much of their activism, especially when it came to African American equality. After achieving emancipation, the antislavery movement fractured over disagreement about what to do next. The ramifications of that splintering can often still be felt today.

The work of the abolitionists should also remind us that federalism fosters activism. Abolitionists initially targeted state legislatures, and local representatives were the ones who first cast votes to use government authority to emancipate the enslaved and ban slavery. Without federalism—or as it is often labeled, states’ rights—political abolitionism would never have gotten the oxygen needed to light a fire for freedom nationally. Local electoral victories legitimized the push against slavery and showed that the status quo could be challenged via democratic means.

American Abolitionism tells how the most important activist movement in American history succeeded by working within the system to expand their power, build a movement, and make their representatives take action. The American system, while often frustrating, allows for reform that can last by demanding approval from the people through their expression in politics—often over multiple elections. The political activism of abolitionists, who employed the tools and freedoms granted to them by the Bill of Rights, should continue to be a model for activism and reform movements today, regardless of political persuasion.

Carl Lawrence Paulus has worked as senior staff on Capitol Hill, in the executive branch, and on political campaigns ranging from local to presidential. He holds a PhD in history from Rice University and is the author of The Slaveholding Crisis: The Fear of Insurrection and the Coming of the Civil War. He lives in Grand Rapids, Michigan.