Feudalism Without a Soul 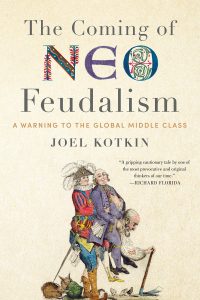 The Coming of Neo-Feudalism: A Warning to the Global Middle Class
by Joel Kotkin.
Encounter Books, 2020.
Hardcover, 288 pages, $29.

Perhaps one of the great cons of the twenty-first century has been corporate America’s success in deceiving middle-class and lower-class Americans that corporations are on their side, while profiting from international tax havens and cheap foreign or immigrant labor that reduces American jobs and keeps money from American taxpayers. Major American businesses declare their woke credentials vis-à-vis Black Lives Matter, #MeToo, and other activist causes, while they send their jobs (and even sometimes their headquarters) overseas. Companies denounce “toxic masculinity” while benefiting from foreign child labor.

Someone who perceptively analyzes this broader trend—in which tech oligarchs and thought leaders in the media, academia, and entertainment industry ally for shared purposes—is Joel Kotkin, a Presidential Fellow in Urban Futures at Chapman University. In The Coming of Neo-Feudalism, Kotkin argues that increasing social stratification across the globe—with a small technocracy and clerisy at the top and a large, uneducated, dependent serf class at the bottom—represents a new, modern feudalism. What binds these two groups together (oligarchs being the feudal lords; thought leaders, the clerics) are shared views on globalism, cosmopolitanism, credentialism, and technocratic expertise.

The tech oligarchs seek to dominate the world financially and technologically. The clerisy in turn aim to undermine traditional bourgeois values with progressive ideas about globalism, environmental sustainability, redefined gender roles, and the authority of experts. They inculcate these values through their “dominance over the institutions of higher learning and media, aided by the oligarchy’s control of information technology and the channels of culture.” Both groups perceive a powerful central government as essential to carrying out their political, social, and economic objectives, and thus the need for an unassailable, credentialed “expert class.”

Kotkin marshalls a host of arresting economic data to demonstrate the widening gulf between the feudal lords and everyone else. The share of global wealth held by the top 1 percent of the global population, for example, increased from 7 percent in 1978 to 22 percent in 2012. By 2030, the top 1 percent is expected to control two-thirds of world wealth, according to one study.

The combined wealth of the richest four hundred Americans exceeds the total wealth of 185 million fellow Americans. Half of the world’s assets are owned by one hundred billionaires, a dramatic consolidation from just five years ago. The proportion of land owned by the one hundred largest private landowners grew by nearly 50 percent between 2007 and 2017.

“Economists may point to better aggregate growth and lower prices for consumers,” observes Kotkin, “But most people do not live in ‘the aggregate.’ They live in their individual reality, which in many cases has gotten bleaker even as the economy overall has improved.” Indeed, what the data indicates is a perhaps unprecedented transfer of wealth from the middle class to the top 1 percent. Coupled with a dramatic decline in homeownership—a marker of economic and social stability—this creates a class of permanent renters, otherwise known as serfs.

There are many other manifestations of this consolidation and centralization. America (and the globe) are dominated by an increasingly short list of tech companies, helped in part by the precipitous fall (61 percent) in antitrust actions in the United States since the early 1980s. Google has purchased 240 companies as of January 2020, and controls nearly 90 percent of search advertising. Facebook controls almost 80 percent of mobile social traffic. Amazon controls nearly 40 percent of the world’s cloud business as well as 75 percent of U.S. ebook sales. Google and Apple together provide 95 percent of operating software for mobile devices. Microsoft accounts for over 80 percent of the software that runs personal computers.

In contrast to other industries, these tech giants employ relatively few people in proportion to their revenues. People, especially the youth, are in turn increasingly reliant on these same companies for their news. The publishing industry, in contrast, has lost about 300,000 jobs since 2001. We already have plentiful examples of these tech giants throwing their weight around, including censoring a September 2020 interview with an academic at Stanford’s Hoover Institute because of his comments on the coronavirus. In the new digital feudalism, consumers provide gobs of personal information to big tech firms in exchange for services. This is furthered by declining literacy that makes us more dependent on the digital economy, while screen time dehumanizes us, increases depression and suicide risk, and erodes our social skills.

Feudalism is also manifested in the consolidation of particular political ideologies among the elites. Among American reporters, only 7 percent identify as Republican, and 97 percent of all political donations from journalists go to Democrats. The same is true in the entertainment industry, in which an overwhelming majority of political donations by major entertainment executives go to Democrats.

Academia is not only exclusivist, it is the least politically tolerant group in America. Ivy League schools enroll more students from households in the top 1 percent than the bottom 60 percent. The proportion of liberals to conservatives at top-rated colleges is at least 8 to 1 and sometimes 70 to 1. Less than 10 percent of faculty at leading law schools describe themselves as conservative. The university, says Kotkin, is now an “ideological reeducation camp.” It seems to be working: 40 percent of millennials favor suppressing speech deemed offensive to minorities.

To get a glimpse of the future neo-feudalist America, one need look no further than California, where a small class of fabulously wealthy and interconnected people act as a new nobility, while a massive underclass of underemployed and unemployed are reliant on the state for survival. California’s level of inequality is greater than that of Mexico, and on par with Guatemala and Honduras. When adjusted for cost of living, California’s overall poverty rate is highest in the country. Eight million Californians live in poverty, including two million children. Almost half the children in the state are living close to the poverty line. The Bay Area is perhaps the worst offender: 76,000 millionaires and billionaires live in Santa Clara and San Mateo counties, while 30 percent of Silicon Valley residents rely on public or private financial assistance.

And lest one think this is only an American problem, Kotkin has more bad news. In China, the top 1 percent of the population hold about one-third of the nation’s wealth, and about 300 people hold about 20 percent. There will soon be more Chinese billionaires than American ones. Meanwhile China employs artificial intelligence with sophisticated algorithms to regulate society and public opinion—you know, the same systems currently used to brainwash hundreds of thousands of “problematic” Uighurs in Xinjiang Province. China has created a massive surveillance state that monitors individual citizens’ social capital, and, as an extension, access to various goods and services. Beijing is selling these surveillance tools to other nations.

What, then, is to be done? Kotkin urges us to strengthen the Third Estate (traditionally defined as commoners) by expanding economic and education opportunities for middle and working classes. Citizens need access to decent-paying careers that don’t require multiple STEM degrees. Home ownership needs to be an accessible, attainable goal for average Americans. There needs to be a reinvigoration of pride in American history and democracy, rather than a deconstructionist, “anti-racist” revisionism that makes young generations ashamed of the country that has provided more social and economic opportunity than any other in history.

Kotkin acknowledges that some concerns of the technocratic elite (like climate change) are legitimate, but that they need to be addressed not with hysteria, alarmism, and broad-sweeping solutions that will inevitably impoverish millions. Rather, we must engage in targeted campaigns to address specific problems, like poor management of California forests. Rather than a disastrous and quixotic Green New Deal, we need to invest in coastal walls, decentralized power systems, desalination plants, and better storage of water, among other things. This kind of thinking is in line with Danish environmental scholar Bjorn Lomborg, who warns that some of the Left’s environmental solutions are worse than the problems they seek to solve.

However, I would argue that as insightful as Kotkin can be, his diagnosis of the problem is incomplete. And because it is incomplete, so are his solutions. Kotkin has some conception of the good life. For example, he argues that, “the issue boils down to whether people—not just those with elite credentials and skills—actually matter in a technological age.” He understands that “many dimensions of human life are not reducible to digital code.” He even acknowledges that religious institutions bring together people of “disparate backgrounds and economic status,” and serve as “unifying transmitters of tradition and cultural identity.”

Yet what is human flourishing? What is it about the human experience that we should eschew a “comfortable, subsidized life indulging in the digital mind-sinks that keep the masses in their metaphorical basements”? Why wouldn’t we want a future in which tech companies implant devices into our brains to control and sedate us, akin to Huxley’s Brave New World?

The answer is that humans are built for metaphysical truth. We yearn for the transcendent. We long for purpose, for a telos that drives us to something beyond ephemeral, material comfort. We are embodied souls who find value and dignity in labor that helps orient us towards greater, objective goods. To be transformed into beings that are simply anesthetized by sensual pleasures is an infantilization, a dehumanization, making us into children who eternally play in the mud, to paraphrase C. S. Lewis. We were made for more than the bizarre transhumanist dystopias that Kotkin rightly perceives as being cut from the same cloth as those of the earlier eugenic movement, as both propose humans can be perfected not by virtue but by technology.

Perhaps part of why Kotkin fails here is because of his blinkered understanding of the medieval world, a landscape he cites in trying to build his neo-feudalist thesis. “In medieval Christian doctrine, the world we grasp with our senses is ephemeral, while the spiritual world is more real, and union with God is the supreme end,” claims Kotkin at one point. Has he read Thomas Aquinas, who taught that sense knowledge is the beginning of knowledge? Elsewhere he argues that medieval Catholicism’s emphasis on the future life damaged service to the res publica. This too is absurd. Monasteries preserved and expanded knowledge, and were engines of economic and technological vitality. The modern university originated in the medieval era. Kotkin also blames celibacy for depressing cultural vitality. Yet celibacy offered unprecedented options for professional and educational growth and leadership, both for men and women.

If Kotkin had fully understood and articulated these truths, The Coming of Neo-Feudalism would be an even more important book than it already is. For in truth, much of what he censures is a failure of contemporary Americans to fulfill one of the great tenets of the Judeo-Christian tradition: love thy neighbor. Roughly 25 percent of New York City’s children live in poverty, while 40 percent of San Francisco families are “struggling” to make ends meet. Blue-collar workers can’t afford to live in the model cities that they keep running. The technocratic elite talk a good game, but they can’t even take care of the people in their own backyards.

Americans must stop the trends Kotkin has so expertly identified. We must do this while middle- and lower-class people still wield political power, before the polis is seized by technocratic experts who dictate to the masses what to think and feel. In that dystopia, there will be no need for democracy, but a new feudalism defined by an ersatz noblesse oblige that looks more like Blade Runner 2049 than the quaint Downton Abbey. The reason we must resist this is not just because of its infringement on human freedom. It’s an infringement on humanity per se.