Finding a Different Self 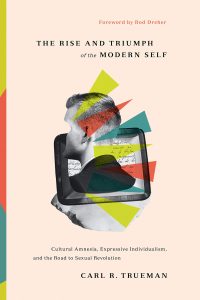 The Rise and Triumph of the Modern Self: Cultural Amnesia, Expressive Individualism, and the Road to Sexual Revolution
by Carl R. Trueman.
Crossway, 2020.
Hardcover, 425 pages, $35.

If a modern day Rip Van Winkle fell asleep in 1960 and woke up in 2020 there would be plenty to surprise him. But had he been a careful observer of intellectual trends already well advanced in his own day, contemporary confusion over human identity would be no revelation. He’d have seen it coming. Rousseau, Wordsworth, Shelly, Blake, Nietzsche, Marx, and Darwin each in their own way set the stage for a world in which the self has turned in on itself. Our sense of what it means to be human has been psychologized, commodified, and abstracted from deeper sources of identity. We are no longer wayfarers in search of sacred order and salvific meaning. Now we are autonomous bundles of desire captive to a corrosive anti-culture and the paltriness of subversion.

In The Rise and Triumph of the Modern Self, Carl Trueman makes this case in a manner accessible to the general reader, while avoiding the special pleading that often plagues intellectual histories written for a popular audience. Trueman, who serves as professor of biblical and religious studies at Grove City College, makes clear that he has undertaken this effort in service to the church, with particular emphasis on his own Protestant tradition. Rather than a jeremiad, it is a calm and considered effort to orient Christians to historical antecedents that explain present realties many find so disorienting. He does this by applying the varied lenses of Alasdair MacIntyre, Charles Taylor, and Philip Rieff to the ideas shaping contemporary society. Trueman also reminds social and theological conservatives, those most likely to be sympathetic to his concerns, of their complicity in the same expressive individualism that animates the debates they are currently losing.

Beginning with Rousseau, Trueman identifies an inward turn away from the search for objective meaning and toward a deification of the self, unchained from the influence of corrupt social institutions. As such “he is in many ways the aboriginal paradigm for psychological man.” Augustine recognized that to be human is to have an inner psychological life operating in the context of broader social realities. But for him, and the Western intellectual tradition he influenced, this reality remained firmly imbedded in a Christian story of personal sinfulness and divine redemption. For Rousseau, “it is society and the relations and conditions that society embodies that decisively shape and … decisively corrupt individuals.”

Seventy years ago, Russell Kirk wrote that we live in a “world that has clutched Rousseau, swallowed him down, and demanded prophets yet more radical.” Rousseau posited an essentially emotive ethical system, but retained belief in the stability of human nature. Deny that stability, notes Trueman, “and what you have is a world in which the subjective sentiments of each person determine their own selfhood.” This modern advance on Rousseau’s thought, the product of prophets yet more radical, is at the heart of the contemporary crisis of identity with which this book is concerned.

Trueman next turns to the romantic poets to explain the mechanism by which Rousseauian ideas gained cultural traction. Here he adopts something close to Robert Langbaum’s view that “It is not this or that political, philosophical, religious, or even aesthetic commitment that marks the romanticist. It is the subjective ground of his commitment, the fact that he never forgets his commitment has been chosen.” Starting with Wordsworth, the romantic poets point inward to an emotional core where true humanity is found. This is the authentic or natural man, freed from the deadening effects of rationalism and mechanization.

It’s clear that Wordsworth advanced such a romantic vision in poems like “Prospectus,” where traditional categories are both retained and subverted:

For the discerning intellect of man,
When wedded to this godly universe
In love and holy passion, shall find these
A simple produce of the common day.

As Roger Lundin points out, “In using the marriage analogy to describe the relation of the mind to nature, poets such as Wordsworth were declaring that imaginative artists might at last achieve what God had failed to accomplish.” Trueman suggests that Shelly pressed matters even further, explicitly endowing the poet with a priestly function, mediating the salvific power of nature. Thus, “[the poet] enables the audience to see beyond the ephemeral particulars of life to a much deeper reality, a deeper unity” achieved through the imaginative, rather than the rational, faculties.

The result is “a selfhood rooted in a belief that human authenticity is to be found by freeing oneself from, or transcending, the alien demands of civilization: by returning to the impulses of nature; and by rooting what it means to be truly human in feeling prior to any consideration of reason.” This is a romanticism of debasement, cut off from the salutary restraints of hard-won generational wisdom imbedded in religious and other humane institutions.

Trueman acknowledges, but gives less attention to, a distinct line of romantic thought that traces its lineage to Coleridge, and even Burke. For them it was not only possible, but necessary, for the aesthetic sense to remain firmly linked to sources of objective truth. Here the imagination retains its formative power; but it is the “moral imagination” of the Biographia Literaria, “the living Power and prime Agent of all human Perception, and … a repetition in the finite mind of the eternal act of creation in the infinite I AM.” The romantic realism of Dostoevsky is perhaps the supreme example of such a synthesis. Rationalism and materialism remain the enemy, and the aesthetic sense retains its primacy (“beauty will save the world”), but in a manner almost directly opposite to Blake’s maxim that “He who desires but acts not, breeds pestilence.”

As Trueman puts it, “For Blake, as for Shelley, the revolution the world needs is essentially sexual and irreligious at its very core, for it is in the affirmation of free love and the rejection of institutional religion that true liberty and personal authenticity are to be found.” For Dostoevsky and his romantic “realism in a higher sense,” this would represent a turn to the demonic. The true path of beauty is found in Revelation 14, among those who deny themselves and “follow the Lamb wherever he goes.”

Burke, Coleridge, and Dostoevsky are largely absent from Trueman’s narrative, because he believes their vision has been eclipsed by our “cultural amnesia.” The prophets of our age are Nietzsche, Marx, and Darwin, each of whom “in their different ways provided conceptual justification for rejecting the notion of human nature and thus paved the way for the plausibility of the idea that human beings are plastic creatures with no fixed identity founded on an intrinsic and ineradicable essence.” Eric Voegelin used a slightly different cast of characters, but also made Trueman’s point. “Whenever in modern intellectual history a revolt against the maximum of differentiation was undertaken systematically, the result was the fall into anti-Christian nihilism … —be it the progressive superman of Condorcet, the positivistic superman of Comte, the materialistic superman of Marx, or the Dionysiac superman of Nietzsche.”

The analysis above takes up the first half of The Rise and Triumph of the Modern Self. We live in a world where “teleology is dead and self-creation is the name of the game,” where “the world in itself has no meaning; meaning and significance can thus be given to it only by the actions of human beings …” Trueman commits the balance of his book to arguing that the contemporary crisis of identity results from the fact that these ideas have triumphed, and are now being sexualized.

Consistent with his ecclesiological focus, Trueman concludes with three admonitions for the church in America:

First, it must give attention to “the connection between aesthetics and her core beliefs and practices.” It will not retain the “dogmatic, doctrinal, assertive” essence of its deepest transcendent commitments, if it gives way to the aesthetic logic of the broader culture.

Second, it must focus on what it means to live out these commitments in community. Community shapes moral consciousness, providing the context in which faith is conveyed and retained. Too often American churches mimic the very expressive individualism that animates confused notions of the modern self.

Third, Protestants, especially, “need to recover both natural law and a high view of the physical body.” Neither were foreign to the magisterial reformers. But ressourcement is critical if Protestants hope to intelligibly shape their congregants and avoid the consequences of “tear[ing] identity away from physical embodiment.”

Trueman’s salutary recommendations are offered to American Christians who have largely internalized modern presuppositions about the self. As such he seeks to remind the church of the catechetical power of adopting ways of thinking and acting that illuminate the reality of duties that arise from and lay tangible claims upon our bodies. These duties include communal obligations that provide the context for lives of well-ordered Christian liberty. Grappling with such duties, and their wide-ranging implications, would present a profound challenge to Christians given over to the expressive individualism of Moralistic Therapeutic Deism. But as theologian David Wells has noted, absent the courage to address the challenges or our times, the church in American will be severely hampered in its mission to serve as “an outpost of the kingdom” where life is lived “pointing beyond itself to that great day” when, in our resurrected bodies, we will glorify God and enjoy him forever.

Lance Kinzer is an attorney and former state legislator from Kansas. His writing has appeared in Mere Orthodoxy, New Horizons and Front Porch Republic