Fly-Fishing and the Constitution 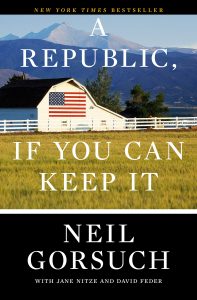 More than two centuries ago, Samuel Johnson made the point that there were some things that were remarkable not because they were done well, but because they were done at all. One example was a dog walking on its hind legs. We might say that a comparable feat would be a recently appointed United States Supreme Court Justice writing a book for a general audience. That’s what we have here, in a tome from Associate Justice Neil Gorsuch, the first of two appointments to the Court made by Donald Trump.

Trump, when a candidate, promised that he would appoint judges committed to implementing the original understanding of the Constitution, and that his two model Justices were Clarence Thomas and Antonin Scalia, the Court’s two most prominent champions of conservative jurisprudence. In this book, written apparently with two law clerks, Neil Gorsuch makes clear that, at least in his case, the President has splendidly kept his promise.

This is not exactly a great literary work. It is a somewhat uneven combination of memoir and jurisprudential and citizenship handbook. Much of the book is taken up by excerpts from cases Gorsuch decided both when he was a Court of Appeals Judge on the Tenth Circuit (which court hears appeals from the federal district courts in Oklahoma, Kansas, New Mexico, Colorado, Wyoming, and Utah, plus some parts of Montana and Idaho) and in his early time on the Supreme Court, and in excerpts from speeches he has given to various legal and academic groups at various points in his career.

The excerpts from cases will likely be only of interest to lawyers, and are, unfortunately, anything but riveting, but the sections featuring the speeches and autobiographical excerpts are more absorbing, occasionally bordering on the enchanting, and give us a picture of an extraordinary, and an extraordinarily modest man.

I already knew that Gorsuch was unassuming, as I had the serendipitous experience of having dinner with him among a group of University of Colorado Law School faculty, at a fancy restaurant in Boulder, a short time before his appointment to the Court. I then had no idea who he was, and this person, who had been introduced as a Tenth Circuit judge, sat quietly, with a somewhat bemused expression on his face, listening to the usual self-important academic banter, and only very occasionally interjecting a wry comment. Only a few weeks later, when he was announced as Trump’s first Supreme Court pick, did I realize I had dined with a future Justice, and, indeed, one of the most accomplished lower federal court judges in the nation.

Gorsuch was an undergraduate at Columbia, a graduate of Harvard Law School, and, after that, a Marshall Scholar (a program funded by the United Kingdom to allow exceptionally talented American students to study there) at Oxford, where he secured a doctorate in legal philosophy. After that Gorsuch clerked for two Supreme Court justices, the retired Justice Byron White (the only other Justice ever to come from Colorado, and the only Supreme Court Justice ever to have led the NFL in rushing) and Justice Anthony Kennedy, with whom Gorsuch briefly served on the Court—the only time in history when the clerk for a Justice sat simultaneously with him.

Gorsuch makes clear that he draws much of his inspiration for his judicial role from White and from the late Justice Scalia, whose seat he took on the Court. Gorsuch may not be as flashy as Scalia, about whom I have written in this journal a couple of times, and who was the Court’s first real celebrity justice. Gorsuch does, however, have Scalia’s mordant wit, which he displays a few times in this book, and indeed, at Scalia’s expense. Gorsuch points out, for example, that in his early days as a Justice he was given the head and antlers of an enormous elk, named Leroy, bagged by Scalia on a hunt in Colorado. He and Leroy, Gorsuch explains, had a few things in common: “﻿We are both native Coloradans. Neither of us will ever forget Justice Scalia. And we’ve both been crated and jumbled across the ﻿country to serve out our remaining time on display at the Supreme Court of the United States.” Gorsuch explains that he never went hunting with Scalia, but he did once fly-fish the Colorado River with him, and

I soon came to learn that, while we might hold similar views on judging, Justice Scalia and I held very different views about fishing. Where I would suggest, say, gently unfurling a line in the direction of a rising trout, Justice Scalia preferred another approach: lashing the stream with the enthusiasm of a son of Queens. When I pointed to a spot likely to harbor trout, instead of stalking slowly in that direction he would storm over in his waders, look around, and then exclaim, “But you said there would be fish here!” As indeed there had been….

There are several such gems, items of pure delight, in the book, but the work has a laudable and serious purpose. This is to promote not only the kind of judging Scalia was famous for—interpreting the Constitution as it was originally understood by its framers and ratifiers (originalism) and interpreting statutes as they were understood by their drafters (textualism)—but to remind judges and Americans that it is emphatically not the job of the judiciary to make law. Instead, as Gorsuch makes admirably and lucidly clear, a judge’s job is rather to follow the law, in order to preserve the rights and liberties we are supposed to enjoy. Gorsuch is also an emerging noble enemy of the Administrative State who believes that the decades of deference to interpretations of laws and regulations by federal agencies, often at the expense of the rights of the people and the intentions of Congress, should come to an end.

As was true for both Scalia and White, however, Gorsuch the man is as admirable as Gorsuch the judge. White was a careful and sensible jurist, with a keen sense of the limitations of the judicial role, and an understanding that the best judge is the kind who eventually is forgotten, because, ultimately, fidelity to the rule of law should be unremarkable. Scalia was not only an originalist, but, like Gorsuch, a man of deep faith, and one keenly appreciative of tradition and the moral basis of law and society.

Exceptionally telling in this regard is the fact that Gorsuch refers twice to an epitaph he keeps on his desk, from the tombstone of Increase Summer of Boston, “a lawyer and judge who today is largely forgotten, as we are all destined to be soon enough”:

AS A LAWYER, HE WAS FAITHFUL AND ABLE; AS A JUDGE, PATIENT, IMPARTIAL, AND DECISIVE…. IN PRIVATE LIFE, HE WAS AFFECTIONATE AND MILD; IN PUBLIC LIFE, HE WAS DIGNIFIED AND FIRM. PARTY FEUDS WERE ALLAYED BY THE CORRECTNESS OF HIS CONDUCT; CALUMNY WAS SILENCED BY THE WEIGHT OF HIS VIRTUES; AND RANCOR SOFTENED BY THE AMENITY OF HIS MANNERS.

In our period of exceptional partisanship, it is refreshing to contemplate the ambitions of this modest jurist, Gorsuch, who shows promise of equaling White and Scalia in importance, if not necessarily in impact. Rightly or wrongly, Scalia was criticized for his off-putting manner, which, at least according to some outsiders, made it difficult for him to persuade his fellows on the Court. I suspect that Gorsuch, the unassuming man with whom I once dined, will be different. And if this book, which may not be a literary jewel, but, still, is a valuable statement of how a Justice (and indeed, how lawyers) ought to think and behave, reaches the wide audience it deserves, then Gorsuch’s vital aim of keeping the republic will stand a better chance.

Stephen B. Presser is the Raoul Berger Professor of Legal History Emeritus at Northwestern University School of Law, and is the author of Law Professors: Three Centuries of Shaping American Law (West Academic, 2017).