For Faith, not Power 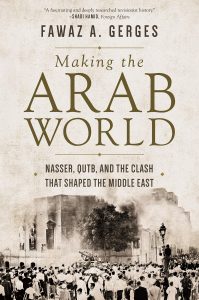 Making the Arab World: Nasser, Qutb, and the Clash that Shaped the Middle East
by Fawaz A. Gerges.
Princeton University Press, 2019.
Paperback, 528 pages, $19.95

One would be hard pressed to find two more iconic figures in the history of the modern Middle East than Gamal Abdel Nasser and Sayyid Qutb. These two Egyptians have come to represent two contrasting visions of Arab-Muslim society. Nasser, “the Lion of the Arabs,” stands for pan-Arabism, socialism, secularism, and the brutal repression of Islamism; Qutb, “the Living Martyr” and “second founder” of the Muslim Brotherhood after Hasan al-Banna, for a radical Islamism that rejects all secular ideologies and embraces violent jihad as the way to achieve “God’s rule” on earth.

In Making the Arab World, however, Fawaz Gerges, professor of international relations at the London School of Economics, aims to complicate this neat dichotomy. As well as “fierce rivalry,” he suggests, the Arab nationalism represented by Nasser and the Islamism represented by the Muslim Brotherhood and its most famous ideologue have been defined by “symbiotic cooperation.” Both originated in opposition to British colonialism, “parasitical capitalism” (which they viewed as an extension of colonialism), and the “quasi-liberal” establishment and autocratic monarchy that ruled Egypt in the first half of the twentieth century. Both “put a high premium on authenticity (asala)”—rooting their ideologies in the symbols and language of the Arab-Islamic heritage. And both were concerned with modernizing their societies in the face of Western advancement.

More important than this ideological overlap, in Gerges’s view, is the closely intertwined history of the Arab nationalist and Islamist movements. His interviews of the surviving associates of Nasser and Qutb, many of them now in their eighties and nineties, some now since deceased, have led him to some remarkable discoveries. Prior to the Free Officers’ revolution of July 1952, Gerges finds, both Nasser and Anwar Sadat were affiliated to the Muslim Brotherhood; indeed, they were part of the “Special Apparatus,” a secret group of pro-Ikhwan army officers within the Brotherhood’s paramilitary wing. For his part, Qutb (who, we are told on several occasions, only formally joined the Muslim Brotherhood in March 1953) supported the Free Officers’ revolution, worked for the military junta in the first months of its rule, and (ironically given the persecution he would later suffer at the hands of the regime) encouraged Nasser and his comrades to show no mercy towards their political opponents.

Some of this has been hinted at before. In his groundbreaking study of The Society of the Muslim Brothers, first published in 1969, Richard Mitchell revealed that al-Banna had first made contact with malcontents in the Egyptian army, including Sadat, during the Second World War, and that Nasser had been in touch with the Brothers since the summer of 1944. “Can we expect good (khayr) from the Muslim Brothers?” Mitchell reports Nasser being asked in February 1946. To which he replied, “Yes, much good (khayr kathir).” Nevertheless, to my knowledge, Gerges’s findings break new ground in the historiography of the early interaction between the two groups.

Of course, the “symbiotic cooperation” was not long to last. When Hasan Hudaybi, al-Banna’s successor as Supreme Guide of the Muslim Brotherhood, sought a more prominent role for the Brothers in the revolutionary government, and Nasser refused, the rivalry recommenced with a vengeance. From Hudabyi’s perspective, Nasser, having once joined the Brotherhood, was breaking his oath of al-sam‘ wa’-ta‘ah, “unquestioning obedience” to the Brotherhood leadership. For Nasser, the Brotherhood’s refusal to accept its rightfully subservient position (Hudaybi having failed to provide support for the 1952 revolution until its success had been secured), was nothing less than ma‘siya, “sinful disobedience.”

After the failure of an internal Brotherhood coup against Hudaybi’s leadership, in January 1954 Nasser announced the dissolution of the Brotherhood, on the grounds that it was seeking “to overthrow the present form of government under the cover of religion.” The Brothers, with Qutb now as their leading spokesman, responded, in a not altogether organized way, by seeking to bring down the Nasser regime by force. On October 26, a young Muslim Brother made a failed attempt to assassinate Nasser while he was giving a speech in Alexandria. In response, Nasser cracked down severely on the Islamist movement: seven leading members, including Hudaybi (whose sentence was, however, commuted to life imprisonment with hard labor), were sentenced to death, and many more were confined to brutal prison camps.

It was in the notorious Tura prison that Qutb developed his radical Islamist ideology, outlined in his two most important and revolutionary works: the Qur’an commentary In the Shade of the Qur’an, and the short tract Milestones on the Path. Smuggled out of prison by Qutb’s sister Hamida and the Muslim Sister Zaynab al-Ghazali, and passed from Brother to Brother, these works—with their stark division of the world into the adherents of Islam and the adherents of jahiliyya (heathen barbarism), their anathematization of most nominal Muslims, and their call for mere preaching (da‘wa) to give way to jihad undertaken by a revolutionary “vanguard”—would provide the ideological basis for radical Islamism up to the present day. Nor was Qutb simply a spokesman for revolution. From his prison cell, Gerges reveals, Qutb also gave strategic direction to the so-called “Secret Organization” (al-tanzim al-sirri), a militant group dedicated to overthrowing the regime and establishing an Islamic society by force. In 1966, Nasser, seeking to “remove the cancer from the Egyptian body politic,” had Qutb executed.

From this history of interaction and rivalry Gerges draws what is his major conclusion. There was nothing inevitable, he suggests, about the conflict between Nasser and Qutb or the form that it took. Neither Nasser nor Qutb was irrevocably wedded to the ideology with which they would become associated. Nasser had flirted with the Muslim Brotherhood, and Qutb had moved in secular literary circles early in his career, and then sided with the Free Officers. Conceivably, the two men could have ended up in each other’s places. Qutb’s changes of direction, Gerges proposes, were as much about his wounded personal pride in the wake of his rejection by the literary establishment and his failure to win a prominent post in the government of the Free Officers, as about ideological conversions.

Gerges in fact pushes the point further, arguing that the conflict between the Arab nationalists and the Islamists was never really about contrasting ideological visions, but simply about power. The dominance of this “power at all costs” mentality, he proposes, bears a large amount of responsibility for the particular political development of the Middle East. Neither secular nationalists nor Islamists have sought to build lasting institutions, acquire democratic legitimacy, or develop a long-term political vision for Egypt and the wider region, opting instead for whatever would enable them to survive—which has invariably meant repression and intimidation.

Gerges is largely successful in telling his story of the “shaping of the Middle East” through the prism of the lives and legacies of Nasser and Qutb, and his analysis of the ways in which both groups have hindered the democratization process is a cogent one. As a general principle, however, one should be sceptical of readings of history that emphasize the drive for power at the expense of giving due recognition to the importance of ideas in shaping individual behaviour. The Muslim Brotherhood may have been intoxicated by the quest for power, yet that quest was driven in the first instance by an ideological vision—the mission, as al-Banna put it, to “destroy the darkness of materialism” that had pervaded Egyptian society and replace it with the light of Islam, to see the spirit of the Qur’an embodied in the life of the people.

Indeed, the Muslim Brothers’ failure to develop a coherent and detailed political program can be explained by their commitment to ideology. As Hazem Kandil has suggested in his Inside the Brotherhood (2014), a belief in divine determinism—that God will ultimately provide the true believers with worldly success—is central to the Brothers’ ideology. If success has been ordained by God—and if “Islam is the solution” and “the Qur’an is our constitution” (as two of the Brotherhood’s most famous slogans have it)—then there is little need to develop “man-made” political solutions to mundane problems; indeed, to do so, from the Brotherhood’s perspective, would be tantamount to blasphemy, for it would be to substitute “the sovereignty of God” (one of Qutb’s key principles, inherited from the South Asian Islamist ideologue Mawdudi) for the sovereignty of the human intellect. As Qutb put it, “The greatest bondage—in the view of Islam—is subservience to human laws legislated by humans.” Why, then, work on a programme for legislating “human laws?”

These are words, as Nettler has put it, of genuine “spiritual intensity and ferment,” not those of a man who embraced Islam—as Gerges suggests—simply because he felt personally slighted by Nasser. This deep religious conviction explains too the famous pictures of Qutb—mentioned by Gerges—smiling before his execution. No one would go so contentedly to die if he did not believe in his heart in the cause for which he was being martyred.

Had Gerges supplemented his many interviews with a closer engagement with Islamist and Arab nationalist texts, he might not have downplayed the ideological and religious dimensions to so great an extent. That said, his underplaying of the ideological component is probably more a reflection of the fact that many analysts and academics today struggle to enter the religious mindset—this being one reason for the West’s more general difficulties in understanding the Islamist phenomenon. That criticism notwithstanding, this is a fascinating and gripping book, which will be necessary reading for anyone interested in the history of the modern Middle East.

Fitzroy Morrissey is a Fellow at All Souls College, Oxford.