Framing a Life in Liberal Learning 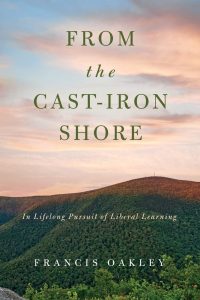 From the Cast-Iron Shore: In Lifelong Pursuit of Liberal Learning
by Francis Oakley.
University of Notre Dame Press, 2018.
Paperback, 526 pages, $35.

The story narrated in any given memoir is dependent on the life of the one who narrates. From the Cast-Iron Shore: In Lifelong Pursuit of Liberal Learning narrates the story of a man from within an Irish Catholic home in Britain to the presidential ranks of private, high-end liberal arts academia in the United States.

Francis Oakley, now the Edward Dorr Griffin Professor of the History of Ideas Emeritus and president emeritus of Williams College, frames the story of his life in three parts: his childhood in Liverpool; the early seeds of his adult life spent in education and military service; and his years of service in Williamstown, Massachusetts. The public “primacy” of Oakley’s life lies in his affiliation with Williams, and his reflection upon academic work will offer the greatest practical application for readers, especially those without a similar background to his own.

Across the first two parts of the book, we come to understand Oakley to be “Irish and proud of it” in the heart of the English country—read: “immigrant,” “a term that that my mother and father would have found offensive had it been applied to them.” If “my father’s Irishness was one thing, my mother’s was quite another,” Oakley writes, and traces his formation through his cultural Irish influence to the particular flavor of Liverpool, where he begins a lifelong love for reading and self-learning, remaining always the most loyal of sons to his parents, swearing “to myself that if I was ever living away from home in the future, I would be sure to write on a weekly basis even if I had little or no news to convey. And that promise I strove mightily.”

These early childhood years precede an account of the Second World War, during which Oakley watched his family prepare its own Anderson Air Raid Shelter, with its “cast-iron frame, into which the back, front, and side pieces of the shelter would slot.” The preparation of this shelter lies among dozens of wartime memories, and comes to one conclusion in an afternoon spent with a friend exploring the “Cast-Iron Shore,” “one of the local names that made their way into the Beatles’ songs later on … It is a part of the South Liverpool shoreline stretching from Dingle to Garston docks where, in the eighteenth century, the hulks of ships had apparently been beached to be broken up for metal scrap—hence the name.”

From within his experience here, in the nooks and crannies of Liverpool, Oakley moves to a high school education among local Jesuits, where he understands the intellectual quest “not so much as an end in itself but as part of the ongoing effort of faith seeking understanding something and as something directed to ‘the greater glory of God’ (Ad majorem dei gloriam, or AMDG, the Jesuit motto).” The deep commitment to imbue his research and teaching with the life of faith followed Oakley over the duration of his career, even if the extent to which his Catholic upbringing determined the roles he undertook was limited. This education lent itself to studies at Oxford. He graduated in 1953 with First Class Honours in the Honours School of Modern History. The many institutional affiliations Oakley adopted during his university time turned him into “a rather institutionally oriented fellow. Institutions, after all, reflect the outpouring of human creativity and, unlike so many academics of recent generations, I have never been tempted to make important and honorable roles within an institution the object of some sort of ‘hermeneutic of suspicion.’”

It is no surprise, then, that following his Oxford time, with a brief departure for the army, Oakley completed his doctoral degree at Yale University in 1959—another institutional touch—and spent two years on its faculty before his departure for Williams in August 1961. Opened in 1790–91, Williams first served as an elementary, free school for the children of town residents as well as an advanced academy or grammar school. In 1793, the institution was incorporated as a degree-granting college for men, and joined the ranks of coeducational colleges in 1970.

Where the first two parts of the book may threaten to read slowly and imbalance that key reason for which Oakley’s reflections are vital, I encourage readers to persevere to the end of From the Cast-Iron Shore. Beautifully written, and narrated in many ways as a novel, with a keen and ever-precise memory for detail, this third part possesses a profound, urgent reflection on the nature of liberal arts academia. Here the nuance of Oakley’s own upbringing and education becomes apparent and receives its immediate, grounded context.

Oakley’s career at Williams constituted for him the integration of quality research, rooted in his love of medieval history, with his teaching, the two inseparable insofar as “there is nothing in principle necessary about the existence of a conflict between a given institution’s commitment to research and its commitment to effective teaching.” In the 1960s, during which the campus experienced more rapid changes over the course of a decade than the century before, Oakley taught through the institutional embrace of female faculty, the removal of fraternity culture, the move into coeducation and integration of black students, as well as evolving changes in curriculum content and addition of new departments.

The call of the Second Vatican Council and its move toward a clearer ecclesial authoritative structure led Oakley to a renewed interest in “the more purely ecclesiological aspect” of the thought of Pierre d’Ailly (1350–1420), a French philosopher/theologian, whom Oakley read at the recommendation of mentor Étienne Gilson. D’Ailly’s thought, paralleled with the institutional questions posed by the Fathers of the Council, left a lifelong imprint on Oakley’s research and moved its own questions closer to the heart of Catholicism in a way he had not anticipated.

The integration of a preference for scholarship and teaching both set the foundation for Oakley’s executive leadership, first as dean of the faculty, to which he was elected in 1977, and second as president of the college, an appointment he began in 1985. These years unfolded against the backdrop of the intentional and thorough support of his wife, Claire-Ann, and many collaborating faculty and administrators. From the Cast-Iron Shore testifies to these public roles, as well as the spectrum of accomplishments and challenges arising from the nature of small collegiate life and the rapidly changing political, social, and cultural forces of the latter twentieth century.

The depth with which Oakley embraces his executive roles ensures that decisions made on behalf of the university during his tenure are grounded in and verified by historical and philosophical accounts of, for example, the nature of leadership; “the practice of paying attention (at least in any systematic fashion) to the ethical aspects of college and university investment policies” and the ethics underlying “socially responsible investment”; and affirmative action debates. These lie as key examples of a multi-decade tug-of-war with moving institutional pieces and commitments before the entire administration, faculty, and student body. The account is never boring and always insisting upon the longevity of campus culture as well as its fiscal stability. These pieces shaped Oakley’s career through the end of his time at Williams in 1994.

A couple of reflections may be offered in summary to insist upon the completion of the entirety of From the Cast-Iron Shore as a key testament to the quality of top-tier teaching and administration, from a key administrator of the twentieth century: In the account Oakley gives of his striving for quality leadership, he affirms that “the exercise of leadership … pertains less to the exercise of power than to the vindication of the legitimacy of that power. Not merely a function of service in the cause of institutional maintenance, it extends beyond that … ‘to the defenses of institutional integrity,’ ‘the sustenance of the institutional core values, the framing, indeed, of the community’s very identity.’” Oakley strove for integrity—regardless of whether every individual decision made was best, regardless of mistakes.

Even more so, the particularity of the presidential role is to stand as the “unambiguous personal embodiment of an institutional story.” The extended society built out within an institution like Williams, among those on campus and those beyond it, among those of the college or external to it, “becomes a [quasi-mystical] partnership” not only “between those who are living,” but “between those who are living, those who are dead, and those who are to be born.” Whether readers bear a personal affiliation with Williams, Oakley’s testimony to the reality, immediacy, and power of campus life can and does directly shape the intellectual imagination about the state of modern liberal arts colleges and their needs—and the demand to understand and properly contextualize, near and far.