From Caliphate to Nation States 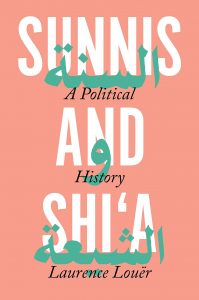 With the death of Hussein ibn Ali, grandson of Muhammad and the third imam, at the Battle of Karbala in 680, the unity of the Muslim world, already tenuous since the death of Muhammad, ended in a schism—Sunnis and Shi’ites. Fourteen centuries later, one is tempted to see the violent antagonism between Shi’a and Sunni countries as unabated since the death of Hussein. In this book, Laurence Louër seeks to add nuance to this narrative by not only recounting the history of Sunni-Shi’a relations but also by presenting the origins of the current patchwork of rival states in the last hundred years.

The division between Sunni and Shi’ite precedes the Battle of Karbala and nearly reaches the origins of Islam itself. After the demise of Muhammad, a portion of the Muslim population believed that the next caliph should be selected, while others suggested that the caliph should be descended from Muhammad, that is, that his son-in-law Ali should be caliph. Though Ali did eventually become caliph, after his son Hussein’s death in the Battle of Karbala, the supporters of Ali’s line gave up hope of political power and resigned themselves to the minority position.

Throughout the Middle Ages, Sunnis and Shi’a worked together and influenced each other’s devotional practices. Despite their theological disagreements with the Sunnis, many Shi’a continued to serve the Sunni caliphs and even obtained positions of honor within their courts. As the caliphs themselves lost power to various emirs and sultans ruling in the caliph’s name, many Sunnis became disenchanted with the decline of the office that, in their view, should have been the head of the Muslim polity. Inspired by the ascetic practices of the Shi’a, many Sunni adopted similar practices during the course of the twelfth and thirteenth centuries, giving rise to Sufism.

None of this is to say that no conflict existed between Sunni and Shi’a sects during this time: the Shi’ite sect of the Assassins preferred to covertly execute various Sunni leaders, ostensibly their co-religionists, instead of the leaders of the Kingdom of Jerusalem. Louër, however, traces the development of lasting antagonism between the two sects to a later period. In Louër’s narrative, the establishment of the Safavid dynasty in Persia marks the beginning of a more permanent rivalry between Sunni and Shi’a as political factions. The Safavids adopted pro-Shi’a policies and encouraged Shi’ites from throughout the Muslim world to settle within their borders. The rising Ottoman Empire, for its part, established decidedly pro-Sunni policies, even while it positioned itself as the champion of the entire Muslim faith.

Over the next three centuries (not covered in Louër’s history), the Safavids faded away and the Ottoman Empire aged into obscurity. Louër picks up her narrative at the death rattle of the Ottomans. After centuries of dominance by the Sunni sultans of Istanbul, both Sunni and Shi’a groups searched for a political form that would both align with their faith and confront the modern state. Approaches differed, ranging broadly from the Muslim Brotherhood’s form of resistance to the unique Iranian solution of a cleric-run Islamic Republic.

The Muslim Brotherhood was founded in the transitionary period between the end of the Ottoman Empire and the rise of various later European protectorates; its members desire to establish the equivalent of a “Muslim International” made up of activist groups that would bring about a truly Muslim polity. Louër characterizes their thought since the middle of the last century as containing, on the one hand, elements demanding withdrawal before a jihad that re-Islamizes the Middle East and beyond, and, on the other, those who suggest that a reforming, gradual Islamization will bring about more success. The authorities in Egypt tolerated the latter and even give it concessions, while the former sank into increasing seclusion.

Iran stands out in this book as more interesting, not only because it succeeded in creating some form of Islamic state, but because this state was headed by Shi’a clerics, who had generally accepted a minority role in government. The assumption of ultimate authority by Shi’a clerics in the Iranian government constituted a break with traditional Shi’a political philosophy, which sought a rapprochement with the powers that be. The sudden opportunity to create a government led by the wisest Shi’a clerics created a novel problem: such a government had never existed, as the last imam—a position filling a similar place of authority for Shi’ites as the Sunni caliph—had either died off or hid himself away in preparation for his eventual messianic return.

To further the end of creating an ideal Shi’a state, the Iranian constitution required that the supreme leader be a marja’, representing not only mastery of the law but also qualities of leadership. The first Ayatollah, Ruhollah Khomeini, recognized that the ruling elders could not reach a consensus in selecting someone they all recognized as the most learned, so he changed the constitution to allow the supreme leader to be a mujtahid, one who is well versed in religious studies but not recognized by all as the most knowledgeable. His successor, Ali Khameini, later attempted to assert power as a marja’, only for Iranian clerical institutions to push back. While the Islamic Republic lives on, the ongoing development of the office of supreme leader illustrates the difficulty of bringing about an Islamic Republic that combines the novel idea of rule by clerics with the institutions of the modern state.

The Saudi kingdom differs from both approaches. While the royal family does not pretend to have a great interest in forming a uniquely Muslim state, it receives advice from the clerics of the favored Sunni sect within the kingdom, Salafism. Unlike the Muslim Brotherhood, the Salafists consider Islamic reform best achieved when they shower princes—even particularly wayward princes—with advice regarding the proper maintenance of the realm. Despite the austerity of Salafism, it serves the royal family to patronize them, in part because the Salafist approach to politics means they will not attempt to seize direct power themselves.

The first section of the book, which covers the initial coexistence of Sunnis and Shi’a and their developing schism, as well as their respective approaches to politics in the last century, deals with the arrival of the modern state and Islamic attempts to create an alternative politics to the modern, secular state. It is worth noting that the rise of Safavid and Ottoman power came about as the great monarchies of Spain, England, and France developed nascent states and established, or attempted to establish, their own chosen religion. In the West, mandates to adopt a particular religion not only destroyed the power of the Church, but also turned religion into a tool to support the monarch’s preferred policies. When the Safavids and Ottomans took their positions as champions of their particular sects, the Shi’a had not had a reigning imam for seven centuries, and the Sunni, while maintaining the idea of the caliph, had abandoned firm belief in the institution after the Mongols decapitated the last clearly legitimate caliph when they sacked Baghdad. Adoption of a particular religious program by Safavid and Ottoman leaders served to increase loyalty to the new regime and identify adherents of opposing sects as enemies.

Centuries later, as the various colonizing empires in the Middle East either collapsed or retreated, both Sunni and Shi’a found themselves with opportunities to create a more truly Islamic polity. For some of the Muslim Brotherhood, this meant retreat before a re-emergence and establishment of a polity in line with Sunni political and legal thought. For Shi’a Iran, this meant taking the state and putting it in control of knowledgeable Shi’a jurists. These questions of how to bridge the divide between the modern, secular state and religion, if the divide can be bridged at all, can and should be asked by more than just Muslims.

The second half of this book delves into the current struggles to reach a sectarian status quo in Iraq, Bahrain, Pakistan, Saudi Arabia, Yemen, and Lebanon. Louër posits that in most countries throughout the Middle East, Sunni and Shia groups have taken otherwise harmonious relations and destroyed them through identifying the other Muslim sect as an enemy. In each of the states Louër covers, post-colonial alliances broke down in power grabs by one or the other sect, with either Sunni or Shia designating the opposition as an enemy group. Iraq and Bahrain provide excellent examples here as places where Sunnis, at least initially a minority, managed to identify the Shia groups seeking recognition as allies of Iran.

Though Louër does not draw this out in her book, in part because it is outside of the story she is telling, it is striking how much of this conflict has to do with the adoption of the structures of the modern state by post-colonial Islamic polities. During initial struggles toward freedom, both Sunni and Shia could acknowledge mutual ends of establishing an independent polity. With independence achieved, however, it took little time for power-holding groups to label erstwhile allies as potentially connected with foreign factions. Louër describes the development of the rivalries between these various nation-ruling groups as “mimetic.” Certainly, actions on the part of one nation representing a certain sect does invite a response from nations ruled by the opposing sect. However—and this interpretation does not entirely preclude the “mimetic” one—the rivalry between Sunni and Shi’a states shows how the willingness to adopt friend-enemy distinctions has corrupted Sunni-Shi’a relations and cast aside visions of a pan-Islamic approach to politics in favor of the power politics of the modern state.

Louër exhibits her great knowledge of her material by managing to sum up the complex political history of Sunnis-Shi’a relations in a way both accessible to those unfamiliar with the Islamic world and interesting to experienced readers of the subject matter. This book reaches beyond the mere facts, however, and introduces readers to the yearning of both Sunni and Shi’a for a united Islamic polity, which has been disrupted by the development of Sunni and Shi’a aligned states since the end of the colonial era. Louër does not offer a solution, and perhaps that is not her role as a historian, but the reader is left with the hope that the manufactured sectarian divides of the last century can be overcome in search of a politics serving the common good of all in the Middle East.

Garrett Robinson is an attorney living in Michigan.