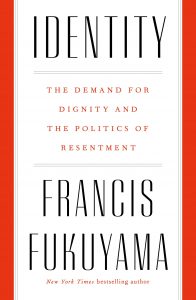 Identity: The Demand for Dignity and the Politics of Resentment
By Francis Fukuyama.
Farrar, Straus and Giroux, 2018.
Hardcover, 240 pages, $26.

The current discussions of “identity” today are overwhelmingly focused on identity politics as opposed to identity itself. We are all trying to grasp this elusive term and its many connotations—religious, ethnic, political, and national, among others. This is the subject matter with which Francis Fukuyama is concerned in his new book, Identity: The Demand for Dignity and the Politics of Resentment. Among many issues, he engages mostly in the analysis of the current trend of nationalism and how American (or other) identity fits into the notion of nationalism.

Fukuyama has been primarily known for his National Interest essay, “The End of History?” that was later developed into a book, The End of History and the Last Man (1992), in which he claimed that human beings have reached not only “the passing of a particular period of post-war history, but the end of history as such: that is, the end point of mankind’s ideological evolution and the universalization of Western liberal democracy as the final form of human government.” Fukuyama relied heavily on Hegel’s theory (and to some extent Marx as well) that history is a linear process.

His argument was met with various criticisms and in the introduction to his new book, Fukuyama addresses them very briefly. He is still concerned where history is taking us as human beings, but he writes that the reason The End of History and the Last Man was criticized is precisely because the use of the word “end” was misunderstood. He then proceeds to explain that the word “history” was intended in a Marxist-Hegelian sense, and that “the word end was meant not in a sense of ‘termination,’ but ‘target’ or ‘objective’.” This conclusion too, however, met with criticism, since it assumes all societies have that same late-liberalism bourgeois target.

Right from the beginning, Fukuyama reveals that “This book would not have been written had Donald J. Trump not been elected president in 2016.” With this sentence, Fukuyama sets the stage, pace, and thrust of the book, in which he explores the notions of nationalism and why, according to him, Trump’s nationalism is bad for America and the world. He claims that Trump has attached himself to the people’s “politics of resentment” (Trump himself being the “practitioner of the politics of resentment”) and has cleverly and manipulatively used that only for self-interest. But before he writes in bigger detail about “populist nationalism,” Fukuyama reflects on the importance of human dignity.

Because identity politics is generally a negative term, Fukuyama wants to avoid conflating identity and identity politics. He writes that “Identity grows, in the first place, out of a distinction between one’s true inner self and an outer world of social rules and norms that does not adequately recognize that inner self’s worth or dignity.” Fukuyama is absolutely correct to identify a very important component to dignity, namely an individual’s interior life. Without such recognition, we are unable to see one another in the fullness of our being. The question “Who am I?” is worthy of asking and is in the foreground of our current cultural wars.

According to Fukuyama, in order to get closer to our current societal issues (especially those that deal with identity), we have to establish that the “modern concept of identity” is composed of three things: “thymos, a universal aspect of human personality that craves recognition”; “the distinction between the inner and outer self, and the raising of the moral valuation of the inner self over outer society”; and “an evolving concept of dignity, in which recognition is due not just to a narrow class of people, but to everyone.” Here, and throughout the book, Fukuyama is concerned with the question of how every human being can be included in the concept and reality of human dignity. This is a valid and most timely question to ask; however the unfortunate weakness of his argument is that he lays the lack of human dignity in today’s society almost solely at the feet of Trump and his supporters.

His approach in tackling this subject is both historical and philosophical. The styles, however, are at times conflicting with one another and the dual approach has thus created stylistic choppiness as well as repetitions throughout different chapters. Without a doubt, what will garner most interest in the book is Fukuyama’s discussion of nationalism. Certainly nationalism is in the foreground or background of most public debates today.

Nationalism, for Fukuyama, is “a doctrine that political borders ought to correspond to cultural communities, with culture defined largely by shared language.” There is nothing wrong with this concept, but it is the nationalism “born out of the acute anxieties bred by industrialization” that we should be afraid of or at least be concerned with, according to Fukuyama. Unsurprisingly, Fukuyama writes about German nationalism and the horrors it led to, which is a valid and important point. But then he points to nineteenth-century German nationalists who wanted to “reestablish German greatness.” Any reader who is even remotely familiar with Trump’s slogan “Make America Great Again,” will undoubtedly connect this statement with the establishment of German National Socialism. It is a tiresome trope to compare Trump to Hitler, especially since the modern American Left has been making that same comparison since Nixon.

One can dislike Trump for his personality or policies, but Fukuyama does not limit his criticism to Trump. Rather, he expands (quite a bit) this criticism to his supporters. Trump, according to Fukuyama, has simply shifted identity politics from the left to the right, and he believes that “many of Donald Trump’s working-class supporters feel they have been disregarded by the national elites” and “feel victimized by a secular culture.” What makes Fukuyama’s claim ironically elitist is exactly this denial of middle America or any American who is tired of being pushed aside by the elite. These are not mere “feelings.” Politicians on the left have been focusing so much on the identity politics du jour (and we have certainly seen much of this behavior throughout eight years of the Obama administration) that the American people have simply had enough. These are realities, not perceptions, and Fukuyama is being rather uncharitable.

Because of this assertion, Fukuyama is wrong on many things. One of them is the claim that “on the left, proponents of narrow identity politics assert that the U.S. identity is its diversity, or that we are somehow united by our diversity.” At the same time, “the new populist right, for its part, looks back nostalgically at a fading national culture that was based on ethnicity or religion, a culture that was largely free of immigrants or significant diversities.” Both of these claims flatten reality and are misleadingly inaccurate.

As to the first claim, for the current left the only diversity that matters is the one that they deem ideologically appropriate. Certainly, anyone who lives in middle America or espouses traditional American views and values will be not be included in that diversity. The second claim, which implies that Trump supporters want a world “free of immigrants” or that are filled with nostalgia is also false. For the most part, Trump supporters are critical of illegal immigration and are not driven by any kind of xenophobia. But that is part of their larger claim: to Trump supporters, the left has no interest in their views, but also will not let them alone to live their own lives.

These first two claims also seem to contradict what Fukuyama states later about immigrant assimilation. He writes that “Well-assimilated immigrants bring a healthy diversity to any society, and the benefits of immigration can be fully realized. Poorly assimilated immigrants are a drag on the state and in some cases constitute dangerous security threats.” These are all correct assertions, and they are clearly coming from a mind trying to set out a thoughtful perspective with appropriate distinctions that are intelligent, just, and balanced. This is why it is puzzling that Fukuyama dismisses the Trump presidency as an exercise simply in power and narcissism; it may well be that, but other thoughtful people have also tried to address immigration in terms that match Fukuyama’s own.

Is there a way to solve the problem of identity and most notably identity politics in America? Tracking with Martha Nussbaum’s treatment of current societal problems outlined in her new book, The Monarchy of Fear, Fukuyama also suggests a similar solution: “universal requirement for national service.” However, the difference here is that Fukuyama is proposing this for the “newcomers” who need to be integrated into the American culture. “Such a mandate,” writes Fukuyama, “would underline the fact that citizenship requires commitment and sacrifice to maintain. One could do it by serving either in the military or in a civilian capacity.” Fukuyama is essentially arguing for some kind of instruction in citizenship, which is an admirable suggestion, and it also demonstrates that Fukuyama does not mind at least certain forms of nationalism, if they are rooted in some common service, rather than, say, religion or language. But is this the right or only way to do it? Part of the reason our current identity politics are so poisoned is because elites rejected any common “American” culture, as can be seen, for example, in the almost complete disappearance of civics or similar patriotic exercises in the public schools. Perhaps Fukuyama’s service project could start with requiring elites to take civics.

There are many excellent questions about identity and its role in being human, but Fukuyama shortchanges the philosophical and historical discussion of identity (both particular and universal) with his attacks on Trump and Trump supporters. It is unfortunate that he has misunderstood that there is indeed an elite that denies the existence of regular Americans, and that these are not perceptions or simulacra that Trump supporters are imagining. Despite this, the book still engages in pertinent discussion of historical movements of various identity, as well as some Ancient Greek ideas on citizenship, and this alone makes this a book worthy of reading.