Fusionism, Gratitude, and the New Right 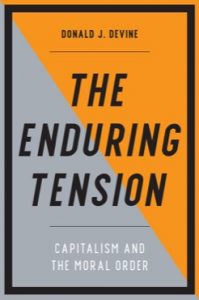 The future of conservatism in America remains a question as members of an emerging new right and an older guard of so-called old fusionists battle over the meaning of conservatism. The challenges and possibilities faced by every generation of conservatives is an opportunity to debate foundations and contemporary applications. The best way to begin to understand conservatism’s future is to look at its past. Donald Devine’s latest work, The Enduring Tension: Capitalism and the Moral Order, provides both new and veteran conservatives an opportunity to do just that.

In this book, Devine endeavors to pull Western Civilization back from the brink by providing an in-depth, though somewhat wandering, analysis and defense of the historical, scientific, moral, and philosophical assumptions that undergird the philosophy of fusionism. He begins the analysis by placing his mission in the framework of Joseph Schumpeter’s Capitalism, Socialism and Democracy. Devine writes:

The essence of [Schumpeter’s] thought was that the capitalism and freedom that generated productivity and widespread prosperity in the West required supporting institutions to legitimize the moral beliefs and legal principles that undergirded this success. Indeed, Schumpeter predicted that capitalism was likely to be superseded by some form of administrative socialism if it did not develop and maintain a countervailing legitimacy.

Amid Devine’s argument one finds the tenets of fusionism: (1) the story of Western Civilization is tied to the story of capitalism—a story of the tension between freedom and order. (2) Personal and economic freedom are the necessary preconditions of political and social freedom. (3) This freedom is unsustainable without order, which is bolstered through the rule of law, personal virtue, and civil society.

Whether or not fusionism has philosophical legs to stand on is an enduring argument. However, one need not subscribe to fusionism to agree that it is a prudent political philosophy to guide our judgment in public affairs. This understanding was long maintained on the American right until recently.

It is assumed by many on the post-liberal wing of conservatism that to be a fusionist is simply to be a libertarian and thus to ascribe to a philosophy of possessive individualism. This argument relies almost wholly on a critique of John Locke. However, as Devine argues, this need not be the case, especially if one values the pluralist capitalism that follows the tradition of Tocqueville, Burke, and others.

Furthermore, opponents of fusionism have begun to support the wielding of government power. This transition is well documented, especially in Stephanie Slade’s recent Reason magazine piece. Devine sees this as akin to older affinities for rationalistic capitalism and economic planning. He draws on his experience as Reagan’s “terrible swift sword of the civil service” to combat these tendencies. For Devine, the failure of rationalist capitalism can be boiled down to the knowledge problem—that is, “the enormous complexity of the world, the limits of science, and the social importance of tradition and custom impose serious limits on the prospects for engineering a rational economy and perfecting society.” Even if we had the most knowledgeable and virtuous people running the system, Devine thinks such efforts are bound to fail.

Despite the depth of this book, I fear it may suffer the same fate as the consensus it so heartily attempts to defend. Indeed, fusionism has been dubbed the “Dead Consensus.” There are two reasons for this. The first is that fusionism is not a particularly sexy political philosophy. It is connected with economists, policy wonks, and lectures that have the tendency to put one to sleep. There is an attractiveness, on the other hand, to post-liberalism, national-populism, and other ideologies coalescing on the new right. This wing of the right does provide some helpful and legitimate critiques of the old conservative guard. Nevertheless, they gain popularity by an appeal to a growing traditionalism in America’s right-leaning youth, not necessarily through cogent argument.

The second reason is deeper. Fusionism, and even forms of traditionalism like Russell Kirk’s, suffers because of the sheer ingratitude of many young conservatives today. This is not true of all on the new right but it seems to be especially true of the younger crowd. Conservatism is built on gratitude. The conservative prioritizes the wisdom of tradition. He understands that he does not know more than the wealth of knowledge that has been passed down to him. Prudent and helpful progress is part of conservatism, but it is only in accordance with tradition that the conservative changes.

I am often reminded of the late Peter Augustine Lawler’s phrase: “libertarian means for traditionalist ends.” This does not mean, as the new right would have it, that all conservatives are libertarians—far from it. Rather it means that conservatives of the old order understood something fundamental about American constitutional government and, further, about humanity. Concerning constitutional government, they understood that the first rule of such politics is never to take a power that one would not give an enemy. Concerning human nature, while it is true that human beings must be good to be free, there is also a certain degree of freedom that is necessary to start on the road to goodness. In our society, libertarian means seem to be the best way to achieve traditionalist ends. I think Tim Carney said it best on a recent episode of Conservative Conversations: “If I’m a libertarian, it’s because I’m a conservative.”

It may be that we are headed toward a new consensus. Indeed, I am not entirely opposed to such a thing. Nonetheless, if conservatives forget the wisdom of those who came before them, if they forget the goods of fusionism, they will be no more than revolutionaries.

James Davenport is the Academic Program Officer at the Intercollegiate Studies Institute and cohost of the Conservative Conversations with ISI podcast. His writing has also appeared in the Imaginative Conservative, Philanthropy Daily, and more.