Genuine Realism in a Multipolar World 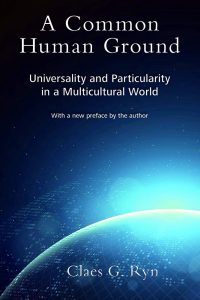 With the problems facing international relations today, political leaders and policy wonks might be forgiven for presuming that a book dedicated to a philosophical argument about the relationship between universality and particularity has comparatively little to interest them. Yet it is one of the many strengths of Claes G. Ryn’s A Common Human Ground that it ably demonstrates the urgency of returning to first principles for those who aim to foster a more irenic world. Ryn, a professor of political philosophy at the Catholic University of America and the founding director of its Center for the Study of Statesmanship, has long been an incisive scholar working on the thought of Irving Babbitt (1865–1933), a Harvard professor of French and the intellectual progenitor of New Humanism. In A Common Human Ground, Ryn, influenced by Babbitt, as well as others such as Edmund Burke and Benedetto Croce, provides nothing less than a complete philosophy of civilization and a rich meditation on “grand strategy” from a broadminded—and deliberately dovish—perspective.

The book originally stems from a “Distinguished Foreign Scholar” lecture series Ryn delivered in 2000 at Beijing University. Although Ryn assembled these lectures prior to the terrorist attacks of September 11, 2001, the book offers an extremely compelling response to the challenges of the post-9/11 world. An English-language monograph based on these talks first saw light of day in 2003. The University of Missouri Press, rightly sensing the continued salience of the issues contained in A Common Human Ground, has now seen fit to produce a paperback edition, complete with a meaty new preface updating the book’s argument to fit the vicissitudes of contemporary international affairs.

“At the beginning of the twenty-first century,” Ryn writes at the start of this preface, “large and seemingly irreconcilable social and political trends in the West and elsewhere seemed to signal an era of progressive fragmentation, tension, and conflict.” Unfortunately, he contends, mainstream schools of international relations appear ill-equipped to encourage more tranquil relations between nations. Although both liberal internationalists and neoconservatives, for example, supposedly aim to create a world order that fits with humanity’s natural predilections, “in practice, this proper order becomes something to be imposed on recalcitrant rulers by people who know what is best for mankind.” Such visions, Ryn maintains, provoke understandable alarm among those whose societies will be upended. He proves equally critical of more hardheaded thinkers: “What is commonly called realism in international relations,” he asserts, “is not as realistic as its proponents think. Genuine realism requires a subtle, multifaceted view of what makes human beings tick, for good or ill.”

Ryn hopes to enrich debates among scholars and practitioners of international affairs by pondering the philosophical foundations for a more salubrious approach. At the risk of simplifying such a nuanced work, A Common Human Ground provides two main insights. The first is rooted in a dualism common to much Eastern, Greco-Roman, and Christian thought. All human beings, Ryn writes, possess both higher and lower potentialities; they must remain vigilant in restraining their rash and egotistical impulses in order to live up to a better version of themselves. “Simply put,” he maintains, “the ultimate source of either peace or war resides in the heart of human beings. Whatever else a secure peace may require, it presupposes actors whose souls are peaceful.”

This supposition dovetails with the book’s second major insight—which also amounts to its chief thesis. To Ryn, “peaceful relations among and within societies and cultures” center on a proper understanding of the relationship between universality and particularity. Although the principle of noncontradiction would lead one to think otherwise, Ryn underscores that particularity and universality are in fact mutually dependent and reinforcing. The book aims to explain how this perspective—in essence, a different take on Plato’s old problem of the One and the Many—both comports with our lived experience and can provide the backbone of a less warlike future. Ryn writes, “in an important sense the truly common human ground is discovered through the differences among individuals and peoples.”

In the book’s brief and elegantly written chapters, Ryn patiently and clearheadedly explains this contention. He does so in part by unearthing the weaknesses inherent in two other approaches to the universal and the particular. Abstract universalists such as Leo Strauss and his epigones, Ryn argues, shun particularity, denigrating it as incompatible with universal standards accessible via philosophical reason alone. In practice, this leads Straussians to favor a brand of ahistorical “Jacobin universalism,” intent on force-feeding the sort of government they esteem on all humankind. Ryn worries that such moral crusading masks a will to power, a desire to control others. And he argues that the philosophical underpinnings of this perspective are wrongheaded: high regard for the universal does not require the denigration of the particular.

Unfortunately, thinks Ryn, another prominent influence on contemporary attitudes overreacts to the abstract universalists, thereby fomenting an equally flawed approach to international affairs. Postmodernists such as Richard Rorty and Stanley Fish have denied universalism wholesale, concluding that human beings lack what Ryn calls “enduring standards of goodness, truth, and beauty.” “Since it does not recognize universality,” Ryn notes, postmodern multiculturalism “must resign itself to the impossibility of any real harmony between human beings. Even individuals from the same cultural groups are, though superficially alike and connected, separated by personal background and therefore ultimately isolated and alone.” Although based on a self-evident truth—that no two human beings are exactly alike—“postmodernists arbitrarily conclude that no genuine conversation, no sharing of experience is possible.” Ryn cleverly counters this conclusion: “Postmodernists deny transpersonal meaning,” he writes, “but nevertheless write books, give lectures, and attend conferences. Their practice belies their theory.”

In place of these two faulty approaches, Ryn proposes what he calls “value-centered historicism.” This perspective “explains the good, the true, and the beautiful as a synthesis of universality and particularity.” It recognizes both the higher and lower potentialities among cultures, and encourages people to see both in all nations, without either smug self-assurance or the idyllic romanticizing of others. Ryn contends that it is through a society’s unique history and traditions that one can gain access to the universal. “Only experience itself,” he writes, “can reveal whether particular principles reflect man’s higher potential.”

The book’s final chapter attempts to hammer home this thesis, using the example of great art and literature as a simultaneous expression of the concrete and the universal. While this discussion may seem a detour from international affairs, Ryn proves otherwise: he stresses that artistic masterworks have the power to shape our vision of the world, enabling people to discern both the nature and possibilities of human existence. The chapter provides a dramatic illustration of value-centered historicism and a beautiful defense of a multicultural humanism. Great works of art, Ryn shows, speak directly to individuals. Still, “The reader of a superior novel does not feel alone but is, on the contrary, intuitively aware of other possible readers in the very moment of reading.” “Meaning is intensely personal,” Ryn continues, “but it is meaningful precisely because it links unique individuality with universal humanity.”

A Common Human Ground is essential reading for numerous reasons. Lacking any polemical traces or academic jargon, it lays out an approach to foreign affairs and human life that seems most likely to convince the skeptical. It is thus an especially valuable read for Ryn’s philosophical opponents. Some may simplistically dismiss conservative dovishness by presuming it ineluctably stems from selfish impulses encapsulated in the slogan “America First.” On the contrary, Ryn shows that such an outlook can spring from noble impulses to respect other nations and foment peace. A major contribution to both political philosophy and international relations, A Common Human Ground provides profound reflections on international relations that can help midwife a less fragmented and conflict-ridden world.

Eric Adler, Ph.D. is associate professor and director of graduate studies in the Department of Classics at the University of Maryland