Great Power Competition Is Like a Bad Designer Drug 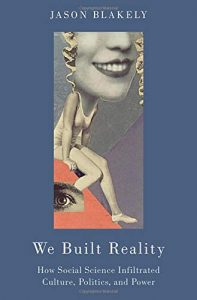 It is perhaps the most infamous quotation from the George W. Bush years. Karl Rove has denied saying it. And when first reported, the quote was merely assigned to an anonymous senior official in the Bush administration. The quote reads as follows: “We’re an empire now, and when we act, we create our own reality. And while you’re studying that reality—judiciously, as you will—we’ll act again, creating other new realities, which you can study too, and that’s how things will sort out. We’re history’s actors … and you, all of you, will be left to just study what we do.”

The Bush administration quote is jarring not simply for its claims but also for the brazen tone in which those claims are advanced. And it takes on an even more ominous meaning when we situate it as the ideological backdrop for launching a dubious war that we cannot seem to escape. Yet if Dr. Jason Blakely (Pepperdine) is correct in his new book We Built Reality, then we are immersed in a world where social-science-as-disguised-ideology functions largely as the senior official stated. Social science helps to create reality—consciously and unconsciously, explicitly and implicitly. And whereas Rove (or whoever) was at least honest about his active role in constructing reality, most of the social science-as-ideology that Blakely critiques in his book thinks of itself and presents itself as merely describing reality even as it is actively shaping that reality in ways that are shielded from examination and critique.

Before I talk about great power competition, let me first consider a less obvious though just as controversial example, namely how we conceive of depression, and based on that conception, how we endeavor to respond to it. Our current dominant paradigm says that as human persons, we are like machines. Indeed, we are so used to conceiving of ourselves in this way that many of our most gripping movies and television shows cause us anxiety precisely by suggesting that perhaps there really are no meaningful distinctions to be drawn between us and the robots. And if we are just complicated machines, depression becomes a bug, in either our hardware (biology) or software (consciousness) and the best solution to that bug is to tinker with the system. Having adopted this metaphor as our metaphysics, we then conclude that depression is the result only of a chemical imbalance, and we respond with designer drugs. And when the pain of unpleasant feelings begins to diminish, we conclude that both our diagnosis and treatment were therefore accurate. Blakey writes that in this instance, “the metaphor [of the self as machine] was therefore lived as an integral part of its justification as a hypothesis.”

To be clear, this is not to say that serotonin levels are not meaningfully connected to depression and happiness, but rather to note that “what antidepressant pharmacology offered was not foremost a scientific theory but an ethical-political practice”—one that is, it’s worth noting, perpetuated aggressively by marketing dollars from pharma companies whose advertising budgets often exceed their budget for R&D. We might have taken as an alternative a view of the human person as a social being, and wondered about the increase in deleterious mental health corresponding to the kind of fragmentation of society that writers like Putnam and Nisbet have been warning us about for decades and responded by renewed efforts to strengthen community. But instead, since our dominant metaphor was the systems-machine in need of tinkering, we find ourselves contented with Huxleian soma-style wonderdrugs as the muting of a symptom we take for a disease, in an effort at concealment that we take to be adequate treatment.

Okay, so now let’s talk about “great power competition.” If you hang out in DC for very long, you’ll encounter a certain breed of foreign policy technocrat who insists that war with China (or Russia, or Iran, or India, or) is inevitable. Some of these technocrats will have read The Thucydides Trap, and far fewer may even have read Thucydides himself, but all of them will have come away with the wrong conclusion. If we take Thucydides at his word (which requires that we don’t impute meanings onto him, like an unsophisticated Straussian), it is an open question whether Athens and Sparta were doomed to war. The technocrat enamored with the metaphor of great power competition is happy to take that open question and turn it into a dogmatic law of nature that whenever a rising power coincides with a waning power, the two are destined to do battle. Deus vult. But a careful reader of Thucydides recognizes that it is the assurance of the inevitability of war that creates the conditions leading to war, and that subtle recognition leaves room for a vision of diplomacy in which the downward spiral can potentially be avoided. DC technocrats will tell you that war is inevitable, then actively create that war (“we’re an empire now, and when we act …”), and then retroactively tell you that the war was inevitable, especially if that war spirals into disaster, which it so often does. And all the while, the “great power competition” theorists are not so different from the pharma companies that sell you on the machine-metaphor, then sell you on the diagnosis, then sell you on their drug as the solution to the diagnosis they gave you based on the conception of personhood they sold you.

All this functions as what Blakely describes as the “double hermeneutic effect, in which an interpretation of the world shapes the very interpretations that comprise it [the world.]” As regards the social world, we make reality through our interpretations, descriptions, theories, and schemas, and then we live out those interpretations as our created reality. As Blakely so vividly describes it, “contemporary social science is a veritable factory of meanings, every bit as dynamic, poetical, and fecund as a creative writing department.” The DC technocrat who tries to sell you on great power competition will insist that he is a realist, and that all your talk of diplomacy and peace is a fantasy, a fiction so far removed from reality as to be juvenile and unserious. But I call bullshit. His (and yes, it’s typically a man) insistence on the inevitability of war is every bit as much of a narrative, just as grounded in poetry-writing and myth-making and the construction of reality as the work of theorists who wish to de-escalate confrontation and avoid war.

Once you see one such a vivid example of the “double h effect” in social science, you begin to see it everywhere. Blakey’s book is filled with many such examples, from the language of “dating markets” leading to swiping on Tinder as the natural outworking of a particular conception of dating, to the imagery of market competition in school choice leading to the siphoning of funds away from at-risk schools, justified on the basis that already well-funded schools are “successful” and deserve to be funded more. Perhaps most relevant to contemporary unrest in America is Blakely’s sobering analysis of the origins of broken-windows theory of policing that used the language of “statistical probability” to create unjustly racialized profiles of criminality that quite naturally led to egregious abuses like stop-and-frisk, and ultimately to the choking-murder of a man selling cigarettes (without a permit!) on a New York street corner by a police officer trained to see black men as particularly prone to violence. The point to again underscore is that just as DC technocrats produce wars through their own interpretations of the world, we create increased criminality in large part through our interpretations and practices (hence why we incarcerate more people in the U.S., and typically for nonviolent offenses, than any other nation in the world.)

The dirty secret of the social sciences is that they have their origins in the anti-metaphysical, deterministic philosophies of logical positivists like A. J. Ayer. Ayer and other such theorists believed that all physical phenomenon could be explained through empirical natural sciences, and that likewise we could develop a unified theory of all social action that was just as empirical, absolving us of the burden of doing moral philosophy, of evaluating values and prescribing better modes of living. To the extent that we treat Adam Smith as an economist—a cold, machine-like calculator describing the natural systems of supply, demand, pricing—rather than considering him as he considered himself, which is as a moral philosopher—than we have succumbed to the logical positivists’ project. But Ayer’s own project fails: his verification principle that “only that which is empirically verifiable is true” is itself a truth claim that cannot be empirically verified. Likewise, what Blakely’s book shows us is that our attempts to strip social-science explorations into such topics as poverty or statesmanship of their moral implications and values-based interpretations, is itself an illusion. We cannot avoid the work of value-making, interpretation, and constructing in the social sphere even if we wanted to, and even if we think we are avoiding it.

If we accept Blakely’s argument, we need not become relativists or will-to-power cynics. Instead, we can readily embrace ourselves as philosophically minded storytellers who accept the ethical burdens of telling good stories. Blakely writes that “the central task of the social sciences is therefore to tell the most objective, nuanced, complex, and true story about a given slice of social reality.” This means that we need to reattach the social sciences to the broader fields of philosophy, recognizing that as academic disciplines they are, as a professor of mine once put it, “philosophy with fieldwork.” In particular, Blakely advises that we turn to hermeneutic philosophers like Paul Ricoeur, Charles Taylor (whose endorsement is prominently displayed on the back of the book), Alasdair MacIntyre, and Hans-Georg Gadamer.

In one of the strongest sections of the book, Blakely argues forcefully that “the story of a society and human agency as a mechanics, susceptible to control and prediction by experts akin to those in the natural sciences, is a bad story.” It is a bad story because it fails to accomplish its own promises of better predictive power (i.e., polling in the 2016 election). But more importantly, it is bad because “it orients us toward manipulating the people around us” and because “it makes us particularly inarticulate and ill-equipped to deal with the world and the moral and political dimensions of our actions.”

There is much work to be done in deconstructing the bad stories that propel us into violence. There is an even greater need to write good stories. We build reality together, as a creative work of our collective human agency. Let’s tell better stories, and so create a better social world.