Hey Buddy, Can You Spare an Enthymeme? 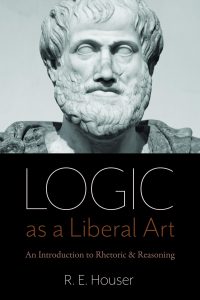 Logic as a Liberal Art: An Introduction to Rhetoric and Reasoning
by R. E. Houser.
The Catholic University of America Press, 2020.
Paperback, 488 pages, $35.

We love to talk about logic. Or, more precisely, we love to project ourselves as being logical, and criticize others when we believe them to be illogical. A December 2019 article by a journalist at The Atlantic was entitled: “Slanted Toilets Are the Logical Extreme of Hyperproductivity.” A November 2019 Washington Post article accused the Republican Party of “grasping at a series of illogical straws” during the presidential impeachment hearings. An article for a Los Angeles Dodgers fan website recently asked “Is David Price the most logical addition for starting rotation?” Yet for all our talk of logic, do we have much of a grasp on what it is, and how to do properly?

Logic as a Liberal Art: An Introduction to Rhetoric & Reasoning, by University of St. Thomas, Houston professor R. E. Houser suggests that most of us probably do not understand what logic actually is. Take, for example, the difference between symbolic logic, a relatively recent historical development popularized by such twentieth-century thinkers as Bertrand Russell and Alfred North Whitehead, and the more ancient natural logic of Aristotle and the Medievalists. Once I told a professional colleague that I was taking a philosophy course that included logic, and he presumed I meant the symbolic kind. When I told him it was Aristotelian instead, he jeered, and claimed that Aristotle was unworthy of study because he believed ridiculous things: that heavy objects fall faster than lighter objects, that women have fewer teeth than men, and that some animals spontaneously come into being.

Perhaps if my colleague had studied more logic he would see his own logical fallacies. One is the fallacy of composition, in which one infers that something is true of the whole from the fact that it is true of some part of the whole. Alternatively, the repudiation of Aristotelian logic because Aristotle was wrong on some things is also a hasty generalization (applying a generalized judgment based on a small sample of data), or, more colloquially, “throwing the baby out with the bath water.” Houser, whose text primarily relies on the deductive reasoning of Aristotelian logic—with a healthy dose of grammar and rhetoric at the beginning—helps us identify the prevalence of illogic in public discourse.

The early chapters on grammar might appear tedious, though the aversion of the American education system to diagramming sentences—something my own parents regimentally learned in the 1950s and 1960s—results in a populace unable to perform even the most basic analyses of arguments. Houser explains: “sentence diagramming has gone in and out of fashion over the years, but it is a fine way to learn how to analyze the grammar and syntax of a sentence.” Not just this, but being able to distinguish between subjects and predicates is a necessary first step for reasoning. As St. Thomas Aquinas explains in Summa Theologiae I-II Q. 2, “a proposition is self-evident because the predicate is included in the essence of the subject.” That means, for example, that the proposition that the whole is greater than the part is self-evident because the predicate (the part) is included within the subject (the whole).

For if one does not distinguish different forms of appeal, an emotional or ethical appeal can lead us to accept a conclusion and then lead us to do a very illogical thing to accept the speaker’s reasoning, even if it is wrong, because it is built on bad principles. This is the way bad ideas can come to be accepted by us and our society (much to our detriment), through what I call the “iron rule of logic.” First one accepts—perhaps with hesitation—a dubious principle that leads to a much-desired conclusion. Then over time the principle is fully embraced but leads to other conclusions, ones you would have rejected when the principle was first hesitantly accepted, but is now accepted as correct, based on embracing that very principle.

So, for example, the sexual revolution’s principle of “not policing the bedroom,” which seemed to many Americans a reasonable one, has resulted in many deviancies, including a billion-dollar exploitive pornography industry.

Alternatively, apprehension of the canon of five rhetorical skills (invention/discovery, disposition/arrangement, style, memorization, and delivery) and rhetorical arrangement (prologue, statement of the topic, proof/argument, refutation, and conclusion) will improve speaking and writing abilities. “Start looking for the organization of everything you read, which will help you organize your own speech, writing, and thinking,” urges Houser.

One of the most enjoyable elements of Houser’s book are the problem sets he provides at the end of each chapter. This is not just because the reader is able to test one’s comprehension of the material. The sources Houser chooses vary widely—from ancient texts like Plato, Aesop, and Euclid, to modern political theorists and philosophers like John Locke, Alexis de Toqueville, and John Stuart Mill, to literary figures like Jane Austen and Henrik Ibsen. This not only creates a rich, fascinating fabric of sources spanning history, philosophy, and literature. It also serves as a valuable reading list for those (like myself) who recognize that their unfamiliarity with these classic sources of Western tradition is an intellectual impoverishment that requires a remedy. Indeed, if Americans were more familiar with the political texts Houser cites, and the kind of logic (or illogic, as the case may be) found therein, we would be a much stronger republic.

Houser’s careful selection of sources also allows readers the opportunity to recognize the logical errors in some of the most influential thinkers in contemporary Western civilization. Take, for example, American pragmatist philosopher William James, who declared that “All you can say of [an idea] then, either that ‘it is useful because it is true,’ or that ‘it is true because it is useful.’ Both these phrases mean exactly the same thing, namely that here is an idea that gets fulfilled and can be verified.”

The problem with James’ argument—before even evaluating each proposition on its own merits—is that one cannot validly derive the second proposition (all true ideas are useful) from the first (all useful ideas are true). Even if we grant that all useful ideas are true, this doesn’t preclude the possibility that some useless ideas (or, at least, ideas we might perceive as useless) are also true. Indeed, the history of human knowledge has been one of discovery of true ideas or processes that at first glance, and perhaps for centuries, appear to be useless. Thus we cannot affirm the second proposition (namely, that all true ideas are useful) because of the first proposition (presuming it’s even true).

Consider another culturally-relevant example, taken from the chapter on enthymemes (arguments with a missing premise) and epicheiremas (categorical syllogisms with an extra part). Here we also can appreciate the importance of understanding the difference between major and minor premises, which is necessary for syllogistic thinking. Houser cites American computer scientists Edmund C. Berkeley, who claimed: “A machine can handle information; it can calculate, conclude, and choose; it can perform reasonable operations with information. A machine, therefore, can think.”

Berkeley’s major premise here is that everything that can handle information can think. His minor premise is that some machines can handle information. The conclusion is that some machines can think. Berkely provides no proof of his major premise, while the proof of his minor premise is that some machines can calculate, conclude, and choose. The argument is actually valid—the truth of the premises logically guarantees the truth of the conclusion. The problem is that the major premise is false—animals, for example, use sense judgment to handle sensory information, but they don’t think, such as reflecting on the process of their perception. Humans use mental signs: concepts, judgments, reasoning, and mental signs related to them, like terms, propositions, and arguments. “There are no philosopher-bears or psychologist-hares, but there are philosopher-humans,” explains Houser.

The Aristotelian logic in Houser’s book brings many benefits. It improves our ability to be intelligent, savvy citizens. It improves our ability to evaluate others’ arguments, and our own ability to make sound arguments. And, it even improves the level of charity in our dialogue. As one example, Houser notes that when people make arguments, they often neglect to include all premises because some are implied or considered so obvious it would make interpretation of the argument tedious. Thus, he argues, it is respectful and charitable to fill in excluded premises before we evaluate others’ arguments. We should try our best to fully build out our interlocutor’s arguments before we start trying to trash them. In doing so, we might, quite to our surprise, recognize our own illogic.