Who, or What, Dropped the Atom Bombs? 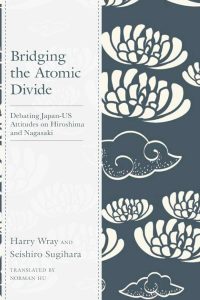 Is “History” a force, or do people decide the course of events? It’s a big question with profound implications. Tolstoy wrote War and Peace to try to figure out whether human beings set their own destinies or are swept along by Hegelian processes beyond their control. Later, under the neo-Hegelianism of communism—whether of the national socialist or international socialist strains—human beings were bronzed in the Party, which in turn was under the control of a Napoleon-type leader who was himself, all the same, merely a function of History’s ineffable will. This is History as Clotho, Lachesis, and Atropos all in one. Men are at the mercy of cosmic disturbances and reorderings that they but very dimly understand.

The alternative view sees history not as a transcendent power but as people muddling along and deciding from moment to moment how to proceed. Paul Johnson, one of the twentieth century’s Olympian historians who wrote richly detailed, and yet panoramic, books on subjects as diverse as Christianity and modern art, argued in Modern Times, that History is nothing; there are only men and women acting. This is history as the tale of fallible humans, operating from hearts badly wounded by original sin and often twisted with pride, anger, and desire for revenge.

This dichotomy between history as History, and history as the excretion of human agency, is the overarching theme for two new books on one of history’s, or History’s, blackest hours: the August 1945 atomic bombings of Japan. In Bridging the Atomic Divide: Debating Japan–U.S. Attitudes on Hiroshima and Nagasaki, veteran Japan scholars Harry Wray (now deceased) and Seishiro Sugihara consider, in remarkably fine-grained, blow-by-blow detail, the events of July and August of that fateful year, with Wray arguing firmly that the bombings were necessary, and Sugihara providing a nuanced rebuttal on the inevitably of any action taken by man. Likewise, in Resurrecting Nagasaki: Reconstruction and the Formation of Atomic Narratives, Chad R. Diehl, assistant history professor at Loyola University Maryland, explores the destruction and rebuilding of Urakami (the bomb technically fell there, and not on Nagasaki proper) against the leitmotif of Catholic doctor Nagai Takashi’s haunting refrain that the Catholics of far-southern Japan were the sacrificial lambs slaughtered to bring an end to the war. In the background of this public and very poignant Abrahamism, however, lurked the machinations of the American Occupation authorities, eager to expiate their guilt over the devastation, or at least to make it seem that the plutonium bomb had been, somehow, an act of God, and not of man.

Bridging the Atomic Divide is, remarkably, the first time that an American and a Japanese have gathered in a scholarly setting to hash out the myriad of views on the atomic bombings. This alone speaks volumes about what “History” is, for when one side loses a war, their narrative disappears. This may seem natural, but, as Sugihara lays out in the last part of the book, the Americans deployed a carefully crafted and -executed plan called the War Guilt Information Program (WGIP), drawn up with the help of leading Western academics in the early days of the Pacific War and designed to squelch all criticism of the Allies’ conduct and the pitiless rain of fire and steel that brought the Japanese Empire to its knees in the late summer of 1945. The Americans censored all newspapers, textbooks, magazines, broadcasts, and all other forms of public communication, and also sent agents to observe political speeches and meetings and generally to spy on the population at large. Anything remotely disparaging of the Americans, or even questioning the need to pursue the strategy of unconditional surrender that Wray assumes was an iron necessity of the war, was silenced, blacked out with brush and ink, or otherwise suppressed. Newspapers were even forbidden from reporting on crimes committed by American servicemen: when a GI raped a Japanese girl, the police blotter read, “The suspect was a tall man.” Capital-“H” History turns out to be the work of men after all.

For Wray, however, the details of the closing days of the war either get subordinated to the logic of unconditional surrender—confirming the necessity, as Wray saw it, to reduce Japan to ruins in order to effect “democratization” (surely there is a lesson here for all of us on the true meaning of “democracy”)—or else dismissed as irrelevant to the war’s higher purpose, again as Wray conceived of it. So, for example, when Japanese generals pushed ahead with plans to draw the Americans into a final, decisive battle on Kyushu and then Honshu, even after General Curtis LeMay had effected hundreds of thousands of civilian deaths by firebombing Tokyo and other major Japanese cities in the early spring of 1945, this simply reinforced, in Wray’s mind, the appropriateness of the unconditional-surrender doctrine. A foe so fanatic deserves no quarter and must be annihilated, is Wray’s basic stance, and also that of Roosevelt and his unconditional-surrender team on the Allied side.

Not even Sugihara’s methodical presentation of the fact that, prior to Pearl Harbor, Roosevelt and members of his inner circle knew that the Japanese were planning to attack, and may even have known precisely where, was enough to dissuade Wray from his devotion to the unconditional-surrender dogma. In fact, Wray simply dismisses Sugihara’s most contentious evidence as the mongering of conspiracy theories, and then pivots to his favorite strawman: that the bombs dropped on Hiroshima and Nagasaki were not the first shots of the Cold War.

Thus, after a detail-packed exposition of the various conferences and hurried meetings in Tokyo convened to consider the Potsdam Declaration, all in the shadow of Soviet entry into the Pacific War, Wray concludes:

[…] even the peace faction [in the Japanese government and military] absolutely would not have surrendered without the atomic bombings and the Soviet entry into the war. Moreover, it was absolutely clear that the militant diehards would not surrender despite the potential loss of a million Japanese lives in a final decisive battle on Kyushu, at least 500,000 lives in subsequent guerrilla warfare fought all the way to Tokyo, a million lives in warfare abroad, and about 2 million more lives from U.S. bombings of the transportation system that would cause severe starvation. (134)

Remarkably, virtually the same phenomenon is on display among the Japanese Catholics of Urakami, those few who staggered out of the radioactive ruins and black plutonium rain to tell the tale of a terrible flash of light, a hellish wall of fire, and a deafening, city-leveling roar. Resurrecting Nagasaki is a nicely written monograph—also the first in English, as it turns out—on Nagasaki the bombed, Nagasaki the resurrected, and Nagasaki the mirror image of its ghastly twinned counterpart, Hiroshima. As Diehl expertly argues, Nagasaki expressly chose not to be defined by the atomic bombing, unlike Hiroshima, which, at the risk of sounding insensitive, has become the willing host to a cottage industry of anti-nuclear and peace activism of an invariably far-left variety. Instead of politicizing the past and seeking identity in a day of supine helplessness and victimhood, Nagasaki chose to rebrand itself as an “international cultural city” which, in the 1950s as in the 1550s—when St. Francis Xavier and his fellow Jesuits first began missionary work in Japan—was open to the world. Before this could be done, however, the ghost of August 9th, 1945 Nagasaki had to be laid to rest. That was accomplished most of all by Dr. Nagai Takashi, the martyr of the atom bomb.

A specialist in radiology, Dr. Nagai had contracted leukemia as a tragic side-effect of his work long before August 1945. But as he suffered from the disease throughout the aftermath of the bombing, he was united in his drawn-out passion with those who developed leukemia and other cancers from the plutonium radiation saturating Urakami’s water and ground. Dr. Nagai lost his wife in the bomb’s blast, and was himself seriously wounded, but he and his children survived. A convert to Catholicism before the war, Dr. Nagai eventually came to see the bombing of Nagasaki—which, apart from incinerating his spouse, blew apart the Urakami Cathedral and scorched the statues of the Blessed Mother and other saints standing watch there—as the work of Heaven. Under the Nagai interpretation, the Nagasaki Catholics were an expiation for the sins of war. It was, as Dr. Nagai wrote to an American nun, an honor for Nagasaki Catholics to have been chosen by God for such an important vocation.

Naturally, the American Occupation authorities were anxious to support Dr. Nagai’s ideas. Diehl explains how, in a time of severe material hardship and economic distress, the best paper and ink, and an expedited censorship process, were all arranged by the Occupation leaders so that Dr. Nagai’s books could become the bestsellers that they soon did. How convenient for the Americans if Japanese, and the world, could be persuaded to believe that it was Yahweh, and not the engineers and pilots of the Manhattan Project, who had blown Hiroshima and Nagasaki to smithereens.

The bitter irony is that, for the Americans, even Dr. Nagai’s suffering, which Nagai and fellow Catholics saw as the cross of martyrdom, was simply one more trick in the democratization routine. As Diehl reminds us, Brigadier General Bonner F. Fellers, Douglas MacArthur’s master of intelligence and propaganda, ran the postwar “Psychological Warfare Branch (PWB) of the Office of War Information (OWI).” The work of the PWB was:

a struggle for the minds of the people, a position which led [to the creation of] a ‘reorientation program’ in the Office for Occupied Areas in the Department of the Army. The goal of the program was to bring the ‘peoples of the occupied areas into the mainstream of democratic life,’ seeking to ‘instruct and guide 90 million people in the ways of democracy’ by tapping into and controlling ‘informational media’ such as ‘motion pictures, press, periodicals, books, fine arts, and exhibits’. Through this program, they hoped they could achieve the ‘long-range task of developing in the minds of the people a genuine understanding’ of American ideals of democracy. (95; emphasis in original)

As in the rapidly de-Christianizing United States, the American occupiers of Japan, too, coopted deep religious faith to further the implantation of democratic ideology. In this, too, we can see how history becomes History, and what the human cost of this transition is.

August of 2019 will mark nearly three-quarters of a century since wide swaths of two cities in Japan were quite literally erased from the surface of the earth in a terrible instant. Before that, many other cities—Tokyo, Osaka, Dresden, Stalingrad—were baptized with brimstone and fury. Was it men, nursing evil and hatred in their hearts, who wrought this thing? Or were they simply following the dictates of History—a kind of Hegelian version of the Nuremberg Defense? Resurrecting Nagasaki and Bridging the Atomic Divide, although conceived and written separately by three very different scholars, form a kind of natural diptych for helping to answer these questions. Anyone interested in history, or in History, will want to buy and read these two powerful new books. On August 6th and 9th, in Japan and in other places around the world, a bell will ring out and a crowd will fall silent, heads bowed in prayer. At that moment, in the hush of living memory, it may be worth wondering: is it the gods who doom men to destruction, or men who bring down ruin upon themselves?