How Philosophy Will Save the World—Or at Least, Make It More Bearable 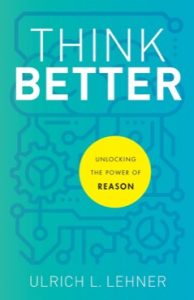 Whatever one might think of today’s society, there is no question that a dearth of clear, logical thinking has contributed to its many problems. While some commentators like to brag that more people are earning college degrees and that everyone now has access to all kinds of information on the internet, this does not account for the fact that most people, with or without degrees, are ignorant of basic facts and struggle with basic logic.

Philosophy professor Ulrich Lehner attempts to address this problem with his new book Think Better: Unlocking the Power of Reason. This short, accessible book is a fine primer on philosophy that cuts through many of the misconceptions and fallacies that plague people’s thinking. It illustrates that philosophy is more than drunken conversations about The Matrix. Philosophy is, rather, a practical discipline that can help a person in a multitude of ways.

Ironically, the great challenge of this book about reasoning is following Lehner’s own reasoning, which tends to go all over the place. By his own admission, Lehner suffers from ADHD, but nevertheless assures readers to trust him, stating that “philosophical reasoning helped me to organize my mind, my studies, and my research.” Perhaps, but it would have been nice to see this exhibited in his book a little more. After all, other philosophy popularizers like Peter Kreeft and Mortimer Adler always made a point of this in their own introductory books to logic and philosophy.

Lehner tends to meander from discussing philosophy as a means of self-help, to various principles of logic, to the fundamentals of Christian apologetics, to the meaning of critical thinking, to ethics, to creativity, to saving the planet. Certainly, all these topics are of interest, and Lehner does a fine job educating readers of the particulars and keeping them at the forefront. And in most of his chapters, one will find bits of pithy wisdom and excellent illustrations of difficult concepts. Nevertheless, there are a few chapters where his usual intellectual crispness becomes soft and muddled.

The high points of the book come up in Lehner’s discussions of philosophy’s personal benefits, the foundational concepts of philosophy, and the logic of empathy. Lehner’s testimonial is an effective beginning that not only inspires the reader but helps them see philosophy, or what he calls “rationality” or “reason,” as a tool for empowerment. As he says at the end of his introduction, “rationality not only aids the common good but can also lead to mutual learning, tolerance, and empathy as well as undermining prejudices and false assumptions.”

This leads Lehner to address the basic stumbling blocks to rationality and establish the first principles of philosophy. To this end, he effectively illustrates how thinking is more than an involuntary chemical process, that strict materialism quickly becomes absurd and untenable, and the importance of distinguishing between subjective and objective reality. This in turn causes him to elaborate on metaphysical laws, the limits of the senses, the rules of logic, and the different dimensions of knowledge and truth.

Later on in the book, in what seems like a digression from the basics, Lehner considers the philosophy of empathy, which turns out to be a fascinating subject. Although modern leaders and intellectuals like to invoke the term ‘empathy’ to signal their lofty motivations, this often ends up meaning little to nothing. As Lehner explains, empathy is more than observing another person’s body language or imagining how they must be feeling. Citing the modern Catholic saint and philosopher Edith Stein, empathy is “the experience of another person’s inner life, and becoming aware of another person’s consciousness.”

In other words, empathy is a complex process of reasoning in which a person draws close to and experiences another person’s experiences. And this is only possible when a person accepts the truth of having an immaterial soul: “our souls are what allow us to be fully present to the other, forget ourselves, and assume the viewpoint of the person we are trying to reach.” Instead of one’s emotions and whimseys, empathy and the basis of human relationships emerge from one’s spiritual core. It is a provocative and profound proposition and goes far in advancing Lehner’s personal case for philosophy.

Unfortunately, these high points of the book are paired with a few lows, particularly Lehner’s chapters on critical thinking and leadership. Even though the lack of critical thinking and bone-headed leadership are both ripe topics for debunking and clarification, Lehner carefully avoids some obvious elephants in the room, like COVID hysteria and now the Russia-Ukraine hysteria. He goes after easy and irrelevant targets like Holocaust-deniers, anti-vaxxers, and global warming skeptics. Needless to say, this makes his otherwise sound advice to trust the experts and read the evidence they produce ring hollow.

While his chapter on critical thinking dodges the main issues, his chapter on leadership falters in its naivety and idealism. Building off his discussion about empathy, Lehner tries to extend this to leaders while ignoring some practical political challenges. In this regard, he comes off more as a careless hippie than an actual philosopher. Without any irony or self-awareness, he grounds his claims in the African concept of ubuntu, “a way of establishing harmony in a diverse culture” by encouraging empathy.

And ubuntu is a fine idea as far as it goes, but Lehner hardly bothers to clarify his terms. What exactly does he mean by “establishing harmony in a diverse culture”? This phrase can mean different things to different people, and a philosopher’s first job is to define them. Otherwise, those who believe in imposing a leftist secular orthodoxy by force and those who believe in maximizing free discourse and limited government can both plausibly claim to practice ubuntu.

Fortunately, these weaker moments are few in what is mostly a helpful, well-written book. In making his case for taking the philosophical approach to life, he is quite successful. So many problems could be resolved if more people started thinking through them in an orderly and unbiased way. This might not bring about Lehner’s apparent wish of enemies coming together, worshiping the same God, and declaring everlasting world peace, but it will at least enable some semblance of individual and communal stability, providing a way out of an increasingly irrational and chaotic world.