How the Vikings Saw Themselves 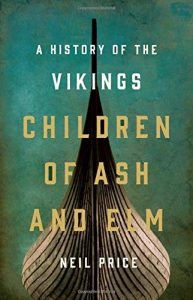 When I stroll through the stacks of a college library, I often find my way over to the DL60s—History of Northern Europe: Earliest to 1387. Scandinavian Empire. Northmen. Vikings. I’m perennially on the lookout for a book to peruse while I put off whatever I’d hoped to accomplish that day. When I find myself in the DL60s, I’m usually in the part of the library where the books are the only distraction. A quarter-mile from the nearest library staircase. As far from the group study areas, 3D printing studios, and spaces designated as one kind of “commons” or another that make up your standard twenty-first century collegiate athenaeum. Far from the madding crowd and nestled among the Norsemen, I’ve spent my share of time with Ivar the Boneless and Eric Bloodaxe.

The next time I’m free to traipse through the stacks at a college library, I will be excited to see Neil Price’s Children of Ash and Elm stationed among the DL60s. Price, a professor of archeology at Uppsala University in Sweden, has added a simultaneously authoritative and accessible account to the rapidly growing and interdisciplinary scholarship on the Vikings. Most accounts of the Vikings have amounted to a faithful rendering of the body counts tallied up by the bards of their victims. Instead, Price tells the story of how the seafaring and raiding peoples of Scandinavia in the centuries on either side of the second millennium AD saw themselves.

Price’s Vikings are something other than the noble, plundering savages of the longships, the image which the author says came into being as Enlightenment-era thinkers began to romanticize the deeds of the famed marauders during the eighteenth century. Since the Vikings lacked a formal written language, Price works back through the archeological record to recreate the practice of everyday life in these societies.

Through the Vikings’ material culture, he discovers a civilization thoroughly invested in the stabilizing force of monarchial rule. Despite the Vikings’ pursuit of power abroad, they had a firm sense of tradition and stability within their own realms. Time was, in fact, measured by Vikings based on the length of a monarch’s reign. He also describes a people that plundered not merely for the sake of short-term pleasures but also for the sake of establishing wealth. On the Swedish island of Gotland, numerous small stakes of silver were found buried on Viking estates. Children of Ash and Elm describes a strikingly cosmopolitan world of the apparent dark ages. One in which Viking leaders visit Rome (in the case of Gudrid Thorbjarnardóttir, arguably the most traveled woman of the middle ages), the Near East, and the New World.

This is not to say that the Vikings’ reputation for brutality was unwarranted. Price recounts numerous gory scenes of battle, pillage, and animal sacrifice. Aside from a few exemplary elite women, it appears that women in Viking societies were regarded largely as commodities comparable to precious metals or pasturage. While the end of the Viking Age corresponded with the Christianization of Scandinavia, the Vikings’ indigenous religion was a grotesque pagan shamanism that is the stuff of nightmares.

Children of Ash and Elm is the culmination of decades of academic writing and field research by Price. It is a broadly accessible, archeologically informed account of one of the most deeply mythologized groups in human history. It builds on his innovative work in The Viking Way (2002), which delves in great scholarly detail into the spiritual lives of the Old Norse speaking peoples. The author is clearly invested in the epistemology of archeology, his discipline of training, but he never gets too far into the weeds for laymen. Despite the heft of this volume, the narrative is always moving and the reader feels stakes in the figures described in the book. At times, Children of Ash and Elm has a nearly elegiac quality, a sense of both a world that has disappeared as well as the continuity of the Vikings’ world in the customs and institutions of our own time. For readers looking to delve deeper than the portrayal of Vikings in popular culture, Price’s book will be an excellent starting point.

Clayton Trutor holds a PhD in History from Boston College and teaches at Norwich University in Northfield, Vermont. He’d love to hear from you on Twitter: @ClaytonTrutor