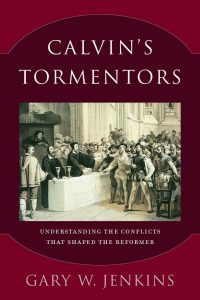 In the wake of the five hundredth anniversary of the Protestant Reformation, Christians are reminded that despite Christianity’s global impact, there exist internal differences. Christianity is divided into three main traditions: Orthodox, Catholic, and Protestant. There are further sectarian or denominational distinctions, the most occurring within the Protestant tradition. Many prominent figures characterize the Reformation, none more recognizable than Martin Luther (1483–1546), Huldrych Zwingli (1484–1531), and John Calvin (1509–64). Each are responsible for nuanced denominations growing out of the Protestant schism from the Catholic Church in the sixteenth century. The nature of the theological differences often leads to works on these figures that can be categorized as attacks, apologies, or academic scholarship. Gary W. Jenkins’s book, Calvin’s Tormentors, is a worthwhile exercise in academic scholarship as it accomplishes an historical examination of one particular reformer and the individual relationships that shaped his theology over the course of his pilgrimage away from the Catholic Church. Originally conceived as a sequel to Machiel A. van den Berg’s Friends of Calvin (Eerdmans, 2009) it morphed into something more intriguing—a study of controversy.

Reflection on historical figures often focuses on the stage when the figures are at the height of their intellectual powers. As readers in the present, we sometimes forget that they did not arrive at their conclusions overnight, nor were their ideas fully formed when they began to impact their contemporaries. Calvin is a case in point and Jenkins’s study of Calvin’s “tormentors” reveals how his theology was continually refined by his interactions with them. It is a refreshing look at Calvin as a Christian humanist struggling with the realities brought on by the internal scandals of the Church, the desire to serve God, and the evaluation of time-honored traditions; each aspect holding the Roman See in contempt to some degree. Without such torment, one has to wonder if Calvin’s Reformed movement would still possess its strong theological distinction and endurance. Jenkins himself credits a debt to Calvin in regard to his own path from the Methodist to the Presbyterian to the Orthodox Church—Calvin prompts deep theological questions leading one to contemplate one’s system of belief and understanding. Calvin as anathema prompts not only an external study of the European religious climate, but a closer inner-circle study of individuals and groups that run the gamut between ally and enemy of the French reformer.

The book is essentially a compilation of mini-biographies on those who most influenced Calvin. An intriguing component of Jenkins’s presentation of the historical record lies within the narrative surrounding the intimate relationships both benign and hostile between Calvin and his tormentors. The text is brimming with historically relevant detail drawing from Jenkins’s own translations from the original Latin and French. Jenkins’s narrative brings alive the complexities of the world Calvin found himself pressed into—both voluntarily and involuntarily depending on the group, individual, or location. It is a wonder that the Reformation yielded organized and definitive theologies given the consequences of heresy, which affected social and economic standing, and more importantly exile from the Church and its sacraments through excommunication.

Three main themes underlie each chapter: Christian humanism, reform, and heresy. Jenkins provides precise detail as to how each component interacts, unfolds, and affects Calvin through the actions and ideas of those with whom he jousts—theologically and at times politically. Calvin is not a trained theologian and he often goes to battle with highly astute and well-educated theologians (Chapter Nine: Joachim Westphal). This is one of Jenkins’s main points. Calvin often had to refine his theological positions and his initial claims. His “tormentors” forced him to work through and clarify his theology, and this diligence informed the process of creating a Reformed tradition of Christianity. Articulating where he maintained (infant baptism) and where he departed (communion) from Roman Catholic tradition was crucial.

Over the course of ten chapters the dynamics of Calvin’s involvement in social, political, and religious reform takes shape. The reader discovers a thoughtful and practical formula used to organize the vast amount of historical data and present the information with literary style and clarity. The chapters discuss what Calvin and each tormentor has in common (education or locale) and their initial religious alliances. Whether through similar theology, desire for reform, or humanism (the most consistent unifying factor) Jenkins positions Calvin as one who did not begin most of these relationships as an abrasive rogue out to destroy the sanctity of Catholicism or the individual’s standing in European society, politics, or the church—although one can argue the obverse was inevitable. Nonetheless, he eventually had to part ways with most of them as they retreated back into the folds of Catholic doctrine (Chapter One: du Tillet; Chapter Three: Sadoleto) or stood out as heretics (Chapter 4: Servetus) to both Catholics and Protestants alike, leaving Calvin to lead the charge of reform on his own. In most cases (one significant exception being the moral reform of Geneva through the Consistory), his initial intentions and interactions were cordial and displayed humanistic curiosity, but when pressed to respond to pivotal theological questions, Jenkins portrays Calvin as one who had to dig in his heels regarding his position, thus setting him apart from certain individuals and groups (Chapter Six: Enfants and Chapter Seven: Baudouin).

Jenkins’s narrative, research, and methodology are comprehensive and largely accurate, with only minor peccadilloes. The common reader should not, and most likely would not, stumble across this book and expect a rudimentary introduction to Calvin and the Reformation. There is a level of assumption as to the reader’s familiarity with the theological debates and overall breadth of the Reformation, which is idiomatic to the field of study but not writ large to the general public. The detail and complexity of the debates, language, and so on may be a bit daunting to the common reader as well. The reader should be aware that this is an unapologetic piece of academic scholarship before opening the front cover.

Jenkins takes care to show the many sides of Calvin—the reformer, the rogue, the totalitarian, the humanist, and the victim. Calvin was a deeply convicted Christian, one who risked his personal advantages for the pursuit of reform based on the authority of God’s word and the person of Christ. He was a charismatic orator and rhetorician who certainly had successes and committed grave missteps such as his flawed conclusions on the language of the Trinity as pointed out by Caroli—something that placed him on the side of heresy, not reform. Each of the mini-biographies provides ample context for the world of Calvin over time and the development of his theology and convictions, showing how Calvin’s tormentors “made it necessary for Calvin and other Reformers to cast their theology in sharper and clearer terms.” Wherever one stands within the three main traditions of Christianity, Calvin and his tormentors aid all involved in the pursuit of understanding the God of Christianity.

Chris Butynskyi holds a Ph.D. in Humanities from Faulkner University’s Great Books program and is a Lecturer in the History Department at Eastern University.