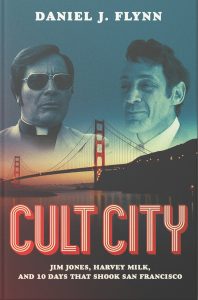 Conservatives of all stripes learn at a very young age that there are certain figures we must keep at arm’s length or else be prepared to explain away; this theorist had a wrong view of slavery, so and so politician or opinion writer took the wrong stance on civil rights. Protestants have to explain away Luther’s anti-Semitism and the Salem Witch Trials, while Catholics are saddled with the Inquisition. Much of this is good in the sense that it has traditionally forced conservatives and traditionalists to smooth their rough edges, though recent years remind us all that plenty of cranks and weirdos remain. This phenomenon has also spurred a reaction among conservatives who see a double standard wherein progressive heroes are granted a pass on their own shortcomings, whether it be sexual peccadilloes in the case of Bill Clinton, racism with Margaret Sanger, or anti-Semitism with Louis Farrakhan.

This is a key revelation in Daniel J. Flynn’s Cult City: Jim Jones, Harvey Milk, and Ten Days That Shook San Francisco. Modern America, to the extent that it knows its own history at all, knows Jim Jones as a fundamentalist pastor who went crazy. It knows Harvey Milk as a gay rights icon, murdered in his prime for his brave leadership on the issue. Most importantly, it “knows” the two men as unrelated, with Jones’s nightmare taking place in a Guyana jungle and Milk martyred in free-wheeling San Francisco. Flynn reveals something different. Though neither man was from San Francisco, and both had troubling private lives, it was San Francisco that gave them the space to flower into the personas that would bring them fame. It was San Francisco that incubated their ambitions, quirks, and, in the case of Jones, insanity. In this respect, Flynn’s highly readable and compelling work is a story about San Francisco, a city with seemingly no limiting principles to reign in its excesses. More broadly, it is a story about the extent to which unfettered ideology excuses a multitude of sins, which in this case led to the deaths of hundreds—in the jungle of Guyana and the concrete jungle of San Francisco.

Flynn makes clear from the outset that Jones was simply not a Christian minister in any traditional sense. His message was socialism and any variety of progressive causes he picked up along the way. Jim Jones’s early biography is almost cliched at this point. He grew up in rural Indiana in an oppressive, fundamentalist environment with an overbearing mother. Flynn mentions that past fundamentalism, but it is worth noting that Jones grew up outside any particular denominational structure and theological framework. It is also worth noting that Jones ultimately settled in a Pentecostal church, in a tradition without strong ecclesiastical moorings that placed, and continues to place, heavy weight on the internal pull of the believer’s conscience. In this respect, there was never a limiting principle at work within Jones, or those around him, that could say “enough.” He was free to continue apace, as much as his appetites demanded.

It is Jones’s lack of theological moorings that is revealing, and should be of more interest to general historians of his bizarre life. Jones grew out of a peculiar Christian culture that elevated feeling, spirit, and intuition over both Scripture and tradition. In this sense, it is difficult to think of Jones as even a fundamentalist. Instead he is perhaps the supreme example of a young Pentecostal man shaping his intuitions and personality into a functioning following. Christians of all traditions know this type too well—the DIY preacher with a flock in a warehouse somewhere on the edge of town who is gone within five years. In Jones’s case, though, his gospel was an ignorant socialism, preached with the endorsement of the leaders of San Francisco, whose commitment to progressivism and social justice left them unable to adjudicate either the teachings or the behaviors of the People’s Temple and its leader.

Like his friend Jim Jones, Harvey Milk never seemed to find his place in the world before arriving in San Francisco. His early life in New York saw him in a variety of occupations, including time in the U.S. Navy. His personal life was rocky, moving in and out of relationships with other men and with a lifelong predilection for troubled men much younger than himself. Flynn depicts Milk as a man with no fixed identity, drifting among various occupations and personalities. He was a commerce-minded Goldwaterite from much of the early 1960s before fully embracing the counterculture later in the decade. Flynn presents Milk as a man in search of stability and, ultimately, love. He eventually found both on the West Coast.

San Francisco brought the two men together. Outliers were always common on the frontier but San Francisco had been an established city for over a century by the time Jones and Milk set up shop. The question that haunts the book is why a city so well established would attract and incubate such figures. It is true enough that outliers often attract other outliers, but neither man is one whom society would look upon as fit for leadership. San Francisco believed otherwise. Again, why?

Flynn wisely avoids hamfisted explanations but instead leaves the reader with an unambiguous possibility. If San Francisco was a church, then progressivism was its religion. Milk and Jones were adherents to that religion, albeit from different angles, and it was their adherence to the faith that allowed city leaders in turn to provide Jones and his People’s Temple with both direct and indirect support. For Milk’s part, he was more than happy to support Jones and use his army of devoted followers as campaign volunteers. Without Jones, Milk may have never been elected. Without Milk, Jones may well have survived and thrived as long as his warped mind allowed. Flynn nevertheless makes clear that Milk’s staunch support for Jones, up until the moment it became very inconvenient to support him, helped protect the People’s Temple from much deserved scrutiny. Perhaps history would have played out just the same without Milk’s endorsement, but Flynn lays plain who Jones was, and how far Milk went to protect his enterprise. That alone is a searing indictment on his legacy.

Lurking underneath the story of Jones and Milk is Dan White, the anxious City Councilman who murdered Milk and San Francisco Mayor George Moscone. Flynn reveals White and Milk as on-again, off-again allies at City Hall. It was Milk’s refusal to support a White proposal that pushed Dan White over the brink, though it is evident that White had a deep-seated sense of frustration that revealed him to be both explosive and morose. In other words, it wasn’t about Milk. Here Flynn again upends the commonly accepted narrative. White wasn’t an anti-gay, right-wing bigot. He was perhaps the most traditional politician in San Francisco at the time, but he supported many gay rights initiatives. Instead, the issues between White and Milk were conventional city politics. Certainly the personalities of the two men enhanced the rivalry, but in the final estimation, both were products of an urban political machine. Milk’s sexuality was almost incidental to his death. If later years have turned him into a martyr for gay rights, and White into a villain for traditionalism, it is only because Milk was otherwise an ordinary politician. He was flamboyant in one obvious respect, but quite mundane in every other.

Cult City is a troubling read in spite of the author’s narrative talents. It is disconcerting because it never directly answers the question of how a city so dedicated to notions of progress and advancement could be so grievously wrong. The answers, it seems, lie in the god of unrestrained romanticism that, when married to a radical, progressive impulse, is unable to properly adjudicate prophets from madmen, explorers from grifters. It is staggering to read through the cast of people who supported Jones and his congregation—mayors, governors, the State Department. The progressive whitewashing of Jones has meant that California Senator Dianne Feinstein has never been held to account for this sorry episode, and among Angela Davis’s many sins against freedom and decency, she has never answered for her open support of Jones. While sincere conservatives of all stripes should strive to avoid “whataboutism,” Cult City is a potent reminder of a disgraceful episode in progressive history. One lesson is not “liberals do it, too!” but instead that surface-level agreement about policy is not proof of good judgment or wisdom. The deeper lesson is that every human is prone to ambition and passion, and so our ideology and temperament should not unleash but temper them.

Matthew Stokes holds an M.A. from the University of Alabama.