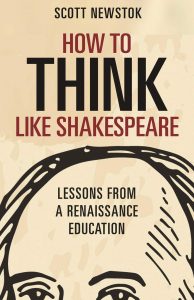 Scott Newstok has written a delightful book about modern education in the guise of a Shakespearean analysis. He succeeds in analyzing how the foremost genius of the literary stage came to acquire the habits of mind that propelled his brilliance. But his real objective is to argue that we should build a bridge to the sixteenth century and make those habits our own. How?

Schools will have to be a focal point. To think like Shakespeare, one would need to go to school in Elizabethan fashion, for schools mold habits of mind. But the gulf between Shakespearean schooling and 2020 quickly becomes apparent. “You’d have a hard time designing a system more unlike our own student-centered, present-focused, STEM-driven schools,” Newstok writes. Elizabethan “education was nasty, brutish, and long.”

Twelve-hour days were devoted to a curriculum based on the classical trivium and featuring heavy doses of Latin translation. Corporal punishment was a given. The enterprise was educationally incorrect from every modern point of view. Indeed, it amounts to a horror show for the up-to-date pedagogue trained in our universities’ progressive schools of education. And yet, Newstok points out, “Thinkers trained in this unyielding system went on to generate world-shifting insights, found forms of knowledge—indeed, the scientific method itself—that continue to shape our lives.”

Contemporary pedagogical theory remains essentially Romantic even in the face of the various testing and “accountability” regimes that have been implemented over the past two decades. This viewpoint is dominated by a child-centered approach, which considers children to be natural learners. For educational Romantics, the school’s job is to fit itself to each unique child. Elizabethan pedagogy showed little concern for inherent student interest.

Child-centered practices, it is claimed, enable student creativity and allow critical thinking to flow. Such faculties are there in the student all along, ready for release and cultivation. To quote the rapidly aging cliché (still trotted out by educationists as if it were a fresh and liberating revelation), the teacher should be a guide on the side and not a sage on the stage. Taken to extremes, the child-centered movement has mistaken mere license for proper freedom, allowing students and teachers alike to glide along the path of least resistance.

Newstok notes the educational Romanticism typified in “Do Schools Kill Creativity?”—a TED video with 130 million views. The title is merely a rhetorical question posed to a friendly audience. The TED talk isn’t meant to change minds but to confirm a prevailing prejudice: of course they do! All that is left to see is the latest bill of particular charges of soul-crushing.

The genial TED presenter assures his audience that Shakespeare had to overcome the structures and strictures of his “English classes.” The clear implication: he became a genius in spite of his schooling. Just imagine what Shakespeare might have gone on to accomplish if his school had allowed him the freedom to pursue his own interests as our schools ought to be doing.

To set the record straight, Shakespeare took no English classes, for no such thing existed. Rather, he would have spent long hours working at grammar, rhetoric and dialectic—the trivium—and drilling in Latin exercises that included copying, imitating, memorizing, and translating. Schools of the era were known to assign double-translation, with the student working a passage from Latin to English and back again to Latin.

Corporal punishment was always a possibility. Boredom would seem inevitable. It was all so much worse, one imagines, than the TED audience actually supposes. Why, the rote learning alone would stunt students forever. Drill and kill.

But learning simply to tolerate tedium is itself a valuable lesson, one that will pay special dividends for those who can master it in our own age of meaningless stimulation and endless distractions. Boredom might even be turned to fruitfulness if one is given the opportunity to do so. Excitement, the expressed desideratum of so many teachers (“I want my students to be excited about _____!”), is by definition a temporary condition, and in any event it is hardly a state of mind missing from the average pupil’s entertainment-saturated life. Isn’t what remains after the excitement dies down the true test of education?

Admittedly, Shakespeare’s invented schoolmasters are not a prepossessing lot. The supercilious pedant Holofernes of Love’s Labor’s Lost is an object of head-on satire. Pompous and prolix Gerrold is a butt in Two Noble Kinsmen. Hugh Evans’s thick Welsh accent is played for laughs in The Merry Wives of Windsor. On the other hand, some scholars give credence to the legend that Shakespeare spent his so-called “lost years” (his twenties, prior to his career in London theater) as none other than a schoolmaster.

Whatever his thoughts may have been about the men who taught him, his work is replete with what they taught him. In the chapter “Of Stock,” Newstok directly confronts the current resistance to “privileging” one text over another, a practice that amounts to a rush from judgment and simultaneously robs the culture of heritage.

Shakespeare’s teachers took it for granted that honoring tradition and legitimate authority led to enrichment. Newstok quotes Erasmus of Rotterdam regarding choice of school material: “From the outset the child [should] be made acquainted only with the best that is available. This implies that the Master is competent to recognize the best in the mass of erudition open to him.”

One need not take the word only literally to recognize the extent to which modern reading lists have departed from that tendency. While the rights of learned experts to set an educational agenda in the STEM fields remain, and likewise in the arts and sports, when it comes to humanistic texts, even many of the “Masters” in the field are reluctant to pronounce. Shakespeare’s masters did not demur so, and the stock of classical works furnished riches for his plays and poetry.

A century ago Alfred North Whitehead declared that schooling had become “rigid where it should be yielding, and lax where it should be rigid.” Newstok declares that there are all sorts of “educational binaries” that need to be swept away. Opposition is imagined where none need exist. Work does not preclude play, nor does imitation preclude creativity, nor does discipline preclude freedom.

Here is Newstok: “innovation [emerges] through constraints.” Through, not in spite of. Think, for example, of the witty sexual repartee in films from Hollywood’s Production Code era; the restrictions gave birth to innuendo, double-entendre, and allusive word play. In short, wit was engendered by constraint.

If the stock of illuminating quotations that fill out these pages is any indication of what Professor Newstok’s lectures might be like, one envies his students. He follows Montaigne’s path, quoting freely and vigorously. He follows the custom of Montaigne and Francis Bacon in titling his pieces—“Of Exercises” is a chapter, “Of Imitation” another. “Of Constraint” and eleven other similar chapters comprise the study, each sufficiently focused to illuminate the main theme but relaxed enough to admit side views and allow a bit of ambling.

This is also a book with enjoyable footnotes—yes, enjoyable—that will send readers on new excursions into the past. Newstok invokes the Chaucerian image of the tradition as old fields that produce new grain year after year no matter their antiquity. The present age forgets this lesson in its rush to embrace superficial notions of “relevance,” and indeed certain quarters have rejected it.

Education is not only about formal schooling. Newstok has much to say in favor of craftsmanship, for example, which is the source of “makers’ knowledge.” “Shakespeare earned his place in our pantheon of minds by staging thought in action.” Craft involves vision, making, and revision, and Newstok reminds us of another sense of the word: cleverness and ingenuity.

Such explorations seek to fill the gap between theory and practice, a discussion which goes all the way back to Aristotle, who spoke of techne and episteme. These terms have also been seen as binaries when they ought to be viewed as driving each other in a positive feedback loop. Philosophers could learn a lot by dirtying their hands, and true craftsmen do not merely practice their craft, they also think about it.

The Renaissance was fond of manuals, literally books that could be held easily in the hand. Newstok’s book is a manual in the very best sense of the word. It is intelligent, perceptive, readable, useful. It transcends this worthy genre of vade mecum by mounting a challenge to conventional wisdom.

Matthew Stewart is Associate Professor of Humanities and Rhetoric at Boston University. He has published in online venues including City Journal, Law and Liberty, and The James G. Martin Center. He is the author of Modernism and Tradition in Ernest Hemingway’s In Our Time.