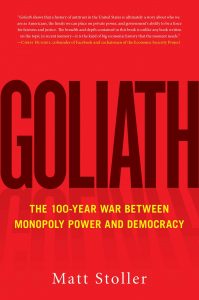 Framing political debates today is nearly impossible. It is beyond debate at this point that our political moment is post-liberal, or at least post-liberal consensus, and skepticism of corporate power is ascendant on the American right and American left. But where to start? Integralist discourse correctly notes that in any policy disagreement, a fully developed moral theory undergirds any position one takes, no matter how loudly one side might scream “pure law!” or “neutral principles!” But the argumentative wheel can’t be reinvented from scratch when arguing about marginal tax rates, or traffic stops, or how or whether to ban narcotics or pornography.

One needs a shared discourse to allow arguments to start in medias res. Arguing with a friend who is a devotee of Ayn Rand, for example, I have found the discussion starts with any given political subject and inevitably steers back towards whether or not common intuitions about things in the world are reliable (as I think) or not (as he thinks). This is the ground on which we disagree, and all disagreement balloons from it.

In an ideological vacuum, there is great value in broad historical surveys. Since history itself is also not a neutral science (are there any?), the inchoate ideology of a historical survey can illuminate values. If the placement of an anecdote, or the description of a cause strikes us as wrong, we have likely identified something true, some bedrock upon which our new unifying theories and culture can be built.

Matt Stoller’s recent book, Goliath, should be placed in this context. The book is a good, if overly lengthy, survey of American anti-monopoly politics from the Gilded Age to today. Stoller, a fellow at the Soros-funded Open Markets Institute, does not explicitly provide a normative framework for thinking about monopoly power, but one can easily discern his motivations based upon what he leaves out, whose hagiographies he writes, and what he does focus on. For example, it is telling that Stoller begins his story in the Gilded Age. Any earlier and he would have to account for the anti-monopoly cause that was championed by Jefferson, Jackson, and the South, or other characters whose faults loom large in contemporary discourse. His overblown critique of Al Smith, and of Teddy Roosevelt; his hagiography of Wright Patman (the brief, end-of-book apologia for Patman’s support for segregation notwithstanding) and Louis Brandeis; the dearth of discussion of Huey Long and Father Coughlin—all of these undergird the project of the book, which is to attempt to position economic populism squarely on the left.

Rather than painting a more integralist picture—anti-monopolism in the United States as one aspect of democratic control over the comprehensive picture of the good in America—Stoller treats anti-monopolism as the whole picture, and social concerns as a swindle, a superstructure on the underlying truth of economic relations. For example, a few stray comments by some Democratic politicians relating to the Prohibition fight serve to paint that complex issue as a simple one of rubes voting against their own self-interest. The saintly inverse is, apparently, leveraging unsavory social issues to serve the right side in materialist history. Patman, the prescient and determined hero in Stoller’s hagiography, was a supporter of segregation. As Stoller contends, Patman “faced down the Ku Klux Klan” in the 1920s, but “had to make a cynical, ugly choice because most white Americans of his era would not tolerate racial or gender equality.” This “ugly choice” was to support segregation. Patman’s choice (explained perhaps by Patman’s political cynicism) is excused by Stoller, but what would Stoller have to say about the cynicism of industrialists who leverage left-wing social causes in order to capitalize, even to monopolize? What of the Radical Republicans?

In Stoller’s telling, Prohibition politics were unfavorable because they apparently leveraged zealotry to defang rising anti-monopolism. Today we see anti-monopoly sentiment defanged by appeals to wokeness: we have a female CEO; we donate to leftwing social causes; we are green. Collusion between government and industry appears as a villain in Goliath, yet the book is silent on several major initiatives of concentrated capital in the last century. The 1965 Immigration Act goes unmentioned, for example, or the corporate campaigns to “divest” from states like Indiana due to traditional marriage norms.

A single concluding note that Patman’s congressional mission wasn’t merely about “material comforts” but about something bigger—some abstract notion of liberty and justice—doesn’t shake the overall theme. And the hortatory conclusion to Stoller’s book is dissatisfying precisely because it is so banal. What can citizens do to fight back against monopolism? “Use your identity … white, black, gay, straight, immigrant, male, female, genderqueer …” And embrace authentic, inclusive populism, not the “toxic fake version of populism” that disdains expertise. True populism “does not disdain expertise, but embraces it,” and leverages expertise in the fight for “justice.”

In this age of populism, the book has genuine value as a broad historical survey; Americans do not like, and long have not liked, anyone controlling their politics and economics. But a better account for precisely why Americans—each American, not each homo economicus—has historically been mistrustful of monopoly, or an account of how this mistrust might manifest itself in the future, would have been of immense value in framing the book. Again, Stoller perhaps cannot do this framing because it would shine a light on the underlying, and contradictory, normative commitments of the coalition he is trying to shore up.

So why are we concerned about monopoly? Are we skeptical of power concentrations as such? This certainly was the view of many of the Founders, and is deeply rooted in the American soul. As James Burnham so clearly framed it in his Congress and the American Tradition: “The Fathers, while accepting power as an essential expedient in human affairs, distrusted all power. What is distinctive about this distrust, distinctively confirmed by the American tradition, is its universality. It is not just a king or an ‘entrenched aristocracy’ that will, given opportunity, tend to despotism. Any class or group of man, any institution, will tend to become despotic if it is able to concentrate power to its own disposition, if it is not counterbalanced by other depositaries of power. There can be a tyranny of merchants as well as of landlords; of debtors as well as of creditors; of the workingman as well as the lord, the poor and lowly as well as the rich and well-born. There are military and priestly and executive despotisms; and legislative and judicial despotism also.”

This seems to me generally correct, and could help explain some of our anti-monopoly politics. But this wasn’t the view of Teddy Roosevelt, or FDR, or Wilson, and it doesn’t appear to be the view of Stoller. Are we skeptical, then, of private concentrations of power? This appears closer to Stoller’s view, but what does this mean? The private/public distinction is as empty as the appeal to liberation—what is public and private, and what constitutes liberty, are conclusions. These are not logical categories. Take, for example, corporate charters. The corporate form is an inherently public act. A sovereign (in the United Kingdom it was the Crown, and in the United States it is state governments) issues a charter, allowing a corporate entity to come into existence and operate under strict conditions. And yet we treat corporate entities as quintessentially private.

At root, then, perhaps our anti-monopolism is driven by a love of smallness, or a fear of bigness. Perhaps it is shorthand for our objection to the liberation of capital from politics. Perhaps we have a particular, traditional American way of life, irreducible to a theory, which is threatened by the corporate form as such. One cannot fault Stoller for failing to begin his account of American anti-monopolism with an explicit theory of state legitimacy and corporate personhood. Yet his assumptions about such topics influence his analysis, and it is this bundle of contested propositions that drive his separation of the wheat politicians from the chaff, his heroes from his villains.

In our political moment, we are all waiting for an organizing principle, a seductive, perhaps unconscious idea to help frame the next chapter in our nation’s history. While Goliath makes a start, other parts of our national story need inclusion.

Andrew R. Kloster is a lawyer practicing in Washington DC.