Is Singapore the Future? 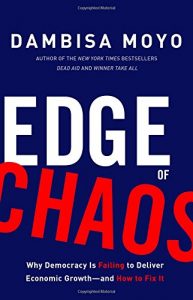 Edge of Chaos: Why Democracy Is Failing to Deliver Economic Growth—and How to Fix It
by Dambisa Moyo.
Basic Books, 2018.
Hardcover, 296 pages, $30.

Dambisa Moyo is exhaustless, insightful, even passionate concerning the evolving challenges facing Western representative democracies. Her latest book, Edge of Chaos, is a detailed register of interlocking ideological and policy preferences explained expertly—which shows that, despite the volley of promises from liberal and conservative politicians alike, Western democracies have mutated largely into gridlocked systems that suborn economic inequality and sharpen uncompromising partisanship, inducing voter apathy; with the effect that the representative democratic project and its corollary capitalist enterprise system teeters on the edge of chaos.

Moyo explains: “The United States now has the highest level of income inequality in the industrialised world, a fact that some regard as a threat to American democracy.” This vanishing prosperity, she says, is the spawn of an inscrutable politics in which voter interests are barely prioritized by their elected representatives; a fact not restricted to the American democratic experience alone. “[B]y the beginning of 2014, nearly half of the world’s economies (65 out of 150) were expected to be at “high” or “very high” risk of social unrest.” Apropos of which, Spain had five governments in two years; Italy had had three at the same time; the French protest against their government daily, and in Britain, nearly 4 million children languish below the poverty line. BREXIT hurls the United Kingdom toward an uncertain future, and the Coronavirus hurls aged Europeans toward death.

Beyond these political theaters of Moyo’s impending chaos, Japan remains gripped by routine economic stagnation (with an anti-democratic corporate scandal to boot), while Austria, Brazil, Hungary, Turkey, and the Philippines reverted to autocracy, xenophobia and open displays of state-sanctioned cruelty … not unlike tendencies now in bloom even in the United States. As the Caribbean dithers in debt, in South Africa, Cyril Ramaphosa took office without a trace of substantive reforms. In Africa, Ghana’s leaders say all the right things, but remain mired in fiscal disarray, enabling dysfunction. Kenya threatens stability only to lose it.

Meanwhile—as is evidenced in Britain’s shambolic divorce from the European Union—multilateralism, the mechanism through which these problems should be addressed, is at its weakest since 1945; with the United States and China in an open trade war, or the American administration bullying Canada and Mexico (when not bullying NATO, WTO, and now WHO), into a meaningless regional trade condominium, which the Trans-Pacific Partnership (TPP) Agreement would have addressed more readily, sustainably, and elegantly. In addition, Argentina readies for its anniversary of defaults and Syria, Libya, Venezuela, and Yemen are testimony to a moral impotency in twenty-first century Western foreign policy. Altogether it seems that nearly everywhere representative democracy is a scheme against the citizen by those elected to represent them, while their economies seem a mere carnival of spoils.

Edge of Chaos can be read as a thesis of disintegration, complementary to the foreign affairs approach in Richard Haas’s World in Disarray: American Foreign Policy and the Crisis of the Old Order, or the economic systems approach in Thomas Piketty’s voluminous Capital and Ideology (2019), or the institutional approach advanced by my former George Mason faculty colleague Francis Fukuyama in Origins of Political Order (2011).

In each of the forgoing intellectual accounts innovative solutions are proposed for the crisis in capitalist democracy, but they lack a democratic mechanism for their enactment, a fate also suffered by John Rawls’s reformative thought experiment in A Theory of Justice. Moyo inherits this problem: “To give effective globalisation a chance, national governments would need to cede real power and authority to global institutions.” But why, how, and by what mechanism would that occur in the competitive milieu of geopolitics, supervening on an even more quixotic domestic political energies? As a rule, solutions aimed at changing society must first produce both a transformative mechanism and an explanation of the animating force likely to drive their adoption as policy, together with incentives likely to induce their embrace within a skeptical—perhaps rightly cynical—polity.

The first three quarters of the Edge of Chaos is a beautifully readable indictment of the current backsliding against capitalism, defined almost matter-of-factly, unperturbed by the conceptual crisis of the economic theory that caused even Dr. Alan Greenspan to admit in his 2009 testimony before the U.S. Senate that “something in capitalism was broken.” Moyo’s refrain is that too little capitalism has been practiced rather than too much. She argues that “short-termism” misaligns and prioritizes immediate political objectives against longer-term economic prospects. She writes of capitalism’s backsliders: “they think they are protesting globalisation when in fact they are objecting to an incomplete and impure from of globalisation that has benefited too few people.”

Moyo acknowledges but ignores deeper fissures within and between free trade, capitalism, and democracy that drive the expanding inequities about which she is concerned; as such, her arguments may lose some persuasive force required for instructive potency. Beyond the encyclopedic descriptive analysis throughout Edge of Chaos, Moyo’s account can be supplemented with consideration of two vast systemic, structural, and existential enervations:

Moyo neither identifies or explains that China—as a unified state and a firm—can be consistent in its strategy to negotiate trade deals. In order to remain competitive with China, America and American companies seem compelled to vacillate constantly between compromise and assertion of “American values”; evidenced by protests against American companies engaging child labor or trade deals that involve unlivable wages, resulting in unfair labor competition to the economic detriment of the American worker. Yet that is not the most ominous point: It is that digitization, surveillance, and the narrowing sphere of privacy such technologies (like Bluetooth “contact tracing”) unleashes, would allow—perhaps induce—America to behave more like China than it would induce China to mimic or adopt American principles.

Where she emphasizes internal faults in Western capitalism, Moyo says, “The burgeoning size of government across the world raises grave concerns,” a point made to emphasize that today seven of the world’s ten largest employers are governments. This sets up the debate currently raging about the collapse or impotency of capitalism: If governments are the largest employers and this was true at the same moment of the largest economic expansion in history (March 1991–March 2001), then it requires more to show government’s economic footprint as the problem in the current crisis of capitalism.

Second, Moyo’s juxtaposition of government and private-sector driven economic models elides deeper questions concerning the viability of capitalism as the engine of the broadest possible prosperity—questions which for this writer, as a capitalist and a scholar, must remain open to unflinching analysis. Consider recent work by our colleague economist Marianna Mazzucato (The Value of Everything, 2017)—who distinguishes between “value creation” and “value extraction,” dramatizing how the basic components of the top four technology companies—Apple, Amazon, Google, and Facebook—were invented and financed by public institutions and funds; thus undermining our too-neat definitions of capitalism as a public-private binary. In taking the beneficial superiority of capitalism as given, Moyo’s prescriptions—which is more capitalism—seems to camouflage this central question in the garment of a ready answer.

The substance of Moyo’s democratic reform agenda is presented in terms similar to reforms last proposed seriously by James Mill (father of J. S. Mill) during the “great reforms” of the 1820–30s. Moyo points out that it is the U.S. government, its corporate supporters, and media that drove the spending of over $14 trillion on thirteen wars in the last thirty years, rather than infrastructure; she shows that corporations and media have metastasized into a collusive cabal that not only controls the twenty-four-hour news cycle, they invent and deploy dominant technologies and have become masters at lobbying and tax minimization on their vast corporate earnings. I add aggressive voter suppression and gerrymandering as additional reasons for systemic democratic sclerosis. Moyo’s proposed solutions include:

By the establishment of “super committees,” such as Simpson-Bowles in 2010, Moyo proposes a feature to refine the presentation or implementation of large-scale policies.

There are many issues here. Going from last to first: most of those super-committees failed. Moyo knows this. Second, a country founded on the notion of God-granted rights that yet emerged in slavery—in which the political process has been essentially captured and managed by pacts and lobbyists—is hardly in a moral position to limit voters in any manner, much less constrain them by “weighted voting” or a preliminary “civics test.” Why not simply educate the population as does Finland, Estonia, and Japan through high school? That educated voter, as in those countries, would likely prove a more “Moyoist” democratic participant. Mandatory voting is the inverse of voting requirements. But why not a non-cash emolument, like a book grant or a food or travel voucher, to induce voting? None of the ways to enforce preliminary experience for politicians are enforceable. A better educated populace might prove more discriminating. I support term limits, which if implemented, could bind with an initiative to limit the frequency of elections.

Policy continuity is the more interesting of Moyo’s ten proposals. Its importance is that feckless changes to policies undermine years of previous research and strategic positioning. In the case of the Trump administration’s rejection of the TPP, hustling instead to “reform” NAFTA, policy continuity would have served well, since the TPP Agreement would have reformed NAFTA in alignment with other geostrategic trade policy options.

These are not criticisms but observations. Moyo—in her way—requires democracy to structure its systems as trade-offs to facilitate multilateral free trade, which she takes to be a fulcrum for prosperity. She could have emphasized digitization as her mechanism to achieve this with only a modicum of democracy as is necessary to achieve human development and shared prosperity goals. Edge of Chaos calls for the “Singaporisation” of democracy, which would cultivate a new Hobbesiansim: a digital Leviathan. If that is what she intended, she should have embraced it fully.

Gilbert NMO Morris—a philosopher, legal scholar, economist, and former diplomat—was professor at George Mason University, where he taught in four faculties. He was also Senior Economic Advisor to the Minister of Finance and Chairman of the National Investment Agency and National Bank of Turks and Caicos Islands. He is one of the world’s leading experts on financial centers. He was educated at the London School of Economics.