Is There a Linear Path to America’s Next Civil War? 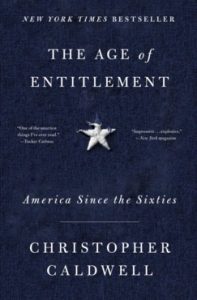 The Age of Entitlement: America Since the Sixties
By Christopher Caldwell.
Simon & Schuster, 2020.
Hardcover, 352 pages, $28.

Christopher Caldwell’s latest book, The Age of Entitlement, is best summarized by a Bill Clinton quote that appears two-thirds of the way through. “If you look back on the Sixties and on balance, you think there was more good than harm, you’re probably a Democrat. If you think there was more harm than good, you’re probably a Republican.” Caldwell, a Senior Fellow at the conservative Claremont Institute, embraces this binary. He argues that America is split between two sides that have “no common language in which to speak to one another,” even as they advance “two different conceptions of political legitimacy” in an unending power struggle. Caldwell goes so far as to suggest that they subscribe to two different constitutions.

The Age of Entitlement is a messy and pessimistic book—of a piece with the increasingly dire posturing of the Claremont Institute crowd who are convinced of an impending civil war (one which many of the more hardline voices on the Right seem to welcome). Caldwell is coy about the potentially radical implications of his diagnosis, in ways I find disturbingly subversive given the broader contours of the discussion. Nevertheless, considered on its merits alone, and not as part of a broader conservative polemical thrust, the book offers an incisive look at the interplay of institutions and culture in a nation that feels like it is always relitigating the 1960s. And the book arrived at a perfect time: 2020 was a year notable for its cultural divisions and social unrest, which provides a certain urgency to the issues it raises.

Race is the theme in which Caldwell’s arguments are clearest. His first claim is that white people in the 1960s were naive. They thought that racism was largely a “Southern problem,” and that “it would be a simple matter to get rid of segregation.” Caldwell writes scornfully of such notions: “as if a system of racial oppression so intricate and ingenious that it had taken three-and-a-half centuries to devise could be dismantled overnight—by sheer open-minded niceness, at no price in rights to anyone.” It was this naivety, he says, that led so many white people to support the Civil Rights agenda in the first place, because they falsely believed that “the country could solve a problem of institutional racism without altering any of its institutions.”

It should not be surprising that Caldwell immediately transitions to quoting Kimberlé Crenshaw—one of the leading voices of critical race theory (CRT), which maintains that racism is encoded in the nation’s law, politics, education, and culture. Caldwell is certainly not a critical race theorist, but he shares with its proponents the belief that racial equality cannot be achieved without significant cost. (Caldwell, ever coy, mostly declines to weigh in on whether equality is an appropriate or commendable goal to pursue.) Understood this way, the angry backlash to CRT by white people who feel aggrieved (and decry “reverse racism”) is, for Caldwell, simply the inevitable next step in an unending power struggle between progressives and conservatives.

Caldwell’s second salient observation regarding race is of the change in tactics by the Left. He notes that the Civil Rights and Voting Rights acts obliterated “the sham democracy of the segregated South.” So far so good. But he laments that the structure of these acts “mixed surveillance by volunteers, litigation by lawyers, and enforcement by bureaucrats” in ways that were able to “bypass the separation of powers” by empowering the federal government at the expense of state and local authorities.

Here, Caldwell is whole magnitudes better than less-sophisticated conservatives who insist that these abuses could have been avoided if Black people had only relied on the legislature and not the courts—as if John Lewis didn’t have his skull beaten in by state troops at Selma when he marched in support of voting rights. But Caldwell’s pessimism is again on full display: He understands the necessity that led to litigation becoming the weapon of choice in the crusade for Civil Rights, while regretting that we now live (as a result) in a world where activism-by-litigation is the national norm.

To illustrate the ways that this new style of litigative activism has reached beyond racial issues, Caldwell points to the swift bestowal of the law’s blessing on gay marriage. He argues that the defining lawsuits that secured this political victory were “carefully designed—one could say scripted—by tax-exempt foundations, public interest law firms, and Manhattan and Washington corporate lawyers.” In other words, an issue that lacked true cultural consensus—and was dealt with in different ways by different states—was suddenly settled by largely undemocratic processes that restructured an institution as old as marriage. A fair enough conclusion, perhaps, but it is also worth noting—though Caldwell himself doesn’t—that the Right has learned to use this playbook, too. The recent Texas abortion bill, for example, relies exclusively on private enforcement through lawsuits in ways that could fundamentally restructure political norms yet again.

Caldwell’s conclusion is depressing. In his view of the nation, there is no true procedural resolution for fundamentally incommensurable moral claims and clashing rights (natural, political, and otherwise). And indeed, there is not even a shared vocabulary with which to debate these clashes. Consequently, he concludes, all existing divisions will deepen, culture war tactics will grow harsher, and the stakes of every election will rise.

Yet it is in this conclusion where, for all its insight, Caldwell’s fatal flaw becomes most evident—his almost-smug apocalypticism. By refusing to envision the possibility of shared civic cohesion, or even of a decrease in the level of polarization, Caldwell relieves his readers of any responsibility to try to create such a world. This is a terrible pity. It is all too easy to be right that things are getting worse when you scoff at efforts to make them better.

Anthony M. Barr is a graduate of the Templeton Honors College at Eastern University and is a current MPP student at Pepperdine University. Anthony has written for several publications including The American Conservative, Plough, and Church Life Journal. He is an editor for the Pepperdine School of Public Policy’s “The American Project,” which promotes a communitarian conservatism.