It Will Mean What the Words Say! 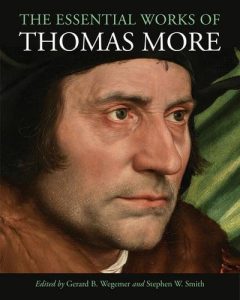 Three scenes from A Man for All Seasons, Robert Bolt’s play about the elevation and martyrdom of St. Thomas More, could have been the inspiration for the monumental task of selecting and editing the writings by and about More that comprise The Essential Works of Thomas More.

In the first, More’s daughter Margaret and (then-future) son-in-law William Roper want More to arrest the scoundrel Richard Rich because, as Margaret says, “Father, that man’s bad.” More refuses on the grounds that there is no law against being a bad man, and that Rich should be free to go “if he was the Devil himself until he broke the law.” After Roper objects to giving even the Devil the benefit of the law, this famous exchange occurs:

More: Yes. What would you do? Cut a great road through the law to get after the Devil?

Roper: I’d cut down every law in England to do that!

More: Oh? … And when the last law was down, and the Devil turned round on you—where would you hide, Roper, the laws all being flat? … Yes, I’d give the Devil benefit of law, for my own safety’s sake.

In the second, Margaret and Roper encounter More with the news that Parliament is about to pass the Succession to the Crown Act of 1534, requiring an oath recognizing Anne Boleyn as King Henry VIII’s lawful wife, and their children as legitimate heirs to the throne. When Roper vaguely tells More that the oath is “about the Marriage,” More asks, “But what is the wording?” Roper contemptuously dismisses the question, saying, “We don’t need to know the wording—we know what it will mean!” More exclaims in reply, “It will mean what the words say! An oath is made of words! It may be possible to take it. Or avoid it.”

The third scene occurs after More’s arrest, when Margaret visits him in the Tower of London and urges More to “say the words of the oath and in your heart think otherwise.” But More could not do that because, as he asks rhetorically, “What is an oath then but words we say to God?” And he continues, “When a man takes an oath … he’s holding his own self in his hands. Like water.… And if he opens his fingers then—he needn’t hope to find himself again. Some men aren’t capable of this, but I’d be loathe to think your father one of them.”

Of course, while Bolt’s play is reconstructed from some contemporaneous accounts, including Roper’s biography, The Life of Sir Thomas More (included in The Essential Works), we do not know that these conversations took place precisely this way. But we do know that the general narrative is supported by historical accounts. More importantly, all three scenes are consistent with More’s deep and abiding devotion to words—spoken, written, and read. For More, words are not merely signs pointing to something beyond them, not only symbols of something real. Rather, for More words are often the things themselves, literally forming the reality in which he lived his life. The law is made of words, and those words are the sources of social order and the guardians of tradition. Words are not accidental qualities of an oath, but the very essence of the oath—the oath is nothing other than the words that comprise it. That is not to diminish, but rather to elevate the oath.

It was precisely More’s facility with and devotion to words that contributed to both his rise and fall. And he wrote a lot of them. More’s contribution to English (and Latin) literature spans genres, and includes poetry, philosophy, political theory, drama, theological polemics, and religious spirituality. His precision with dialogue and love of puns and double entendres is well documented. But most importantly, More understood the gravity and seriousness of words. His ability to write words led to his abiding fame; his refusal to speak them led to his death.

In their majestic Essential Works of Thomas More, editors Gerard B. Wegemer and Stephen W. Smith do a great honor to More’s devotion to words and a great service to those who seek to better understand More through his own words and those of some of his contemporaries. In so doing, the editors evince both their nearly encyclopedic knowledge of More’s life and writing and their own devotion to the written word.

Drawn from the fifteen-volume critical Yale Edition of the Complete Works of St. Thomas More (The Complete Works) and intended as a one-volume distillation of More’s most important English and Latin writings, the Essential Works goes well beyond a mere reprint of these works. And it is an essential companion, even for the scholar who has access to The Complete Works.

As one would expect, The Essential Works contains the complete texts of Utopia, The Four Last Things, A Dialogue of Comfort, and The Sadness of Christ. But they also include early English poetry and dialogues, The Life of John Pico, The History of King Richard III, A Dialogue of Sir Thomas More, The Apology of Sir Thomas More, Knight, and selections from A Response to Luther and The Confutation of Tyndale’s Answer. It also contains a very generous collection of letters spanning More’s lifetime, up to and including his fifteen months in the Tower.

A lengthy introduction to The Essential Works includes a detailed historical and literary chronology (supported by references to works in the volume), from More’s birth in 1478 to his death in 1535. And the editors provide contemporaneous biographical details about More through various sources: letters of family members, such as his daughter Margaret and his wife, Dame Alice More; a reconstruction of More’s trial; early biographical sketches from friends and foes of More, including, among others, Erasmus, Roper, Reginald Pole, and William Tyndale; and, finally, The Book of Sir Thomas More, a play from about 1595, by several authors, including William Shakespeare.

The Essential Works also includes a gorgeously reproduced collection of about 40 illustrations and 40 plates. These include facsimiles of book covers, pages from More’s writing in his own hand, maps, sketches, and portraits of More, his family, and the various players in the drama of his life, including Erasmus, Thomas Cromwell, Thomas Cranmer, Luther and, of course, Henry VIII.

Perhaps most important and impressive, however, is the editors’ work in providing standardized modern English editions of the English works and a highly useful scholarly apparatus. This is no small feat, considering the lack of standard spelling in sixteenth-century writing, archaic words and phrases, and unusual syntax in much of More’s work. The editors have also provided extensive footnotes, where they define obscure words, identify historical figures and events, and cross-reference contemporary works. And they include links to numerous online resources for further study, such as the untranslated Latin works, bibliographies, concordances, and other scholarly resources.

In describing the preparation of this volume, the editors explain that they “had particularly in mind those for whom More’s works are less familiar, but who nevertheless wish to make a solid beginning of studying his writings.” This is too modest a claim. While it is, indeed, highly accessible to the casual reader, The Essential Works is an ambitiously conceived and expertly executed resource for the most serious scholars of More’s life and work. It will, as it should, become the standard one-volume edition.

The words of St. Thomas More—those he said and those he refused to say—have had a resounding and lasting historical impact. The words he wrote are a signal contribution to dramatic dialogue, philosophy, statesmanship, legal theory, poetry, theology, and spiritual devotion. And the words he refused to say are a testament to a man of singular virtue—a witness to a life ordered toward the God he loved and served. The Essential Works of Thomas More tell that story in a stunningly beautiful volume, and a necessary tool for any More scholar.

Kenneth R. Craycraft Jr. is an attorney and professor of moral theology at Mount St. Mary’s Seminary & School of Theology.