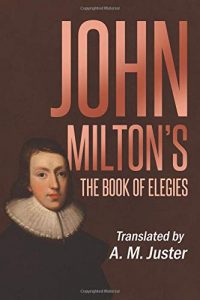 John Milton’s The Book of Elegies
translated by A. M. Juster
The Paideia Institute for Humanistic Study, Inc., 2019.
Paperback, 135 pages, $15.

As we are told Mount Helicon had two fonts of poetry, so we witness in recent years an outpouring of both original poems and literary translations from A. M. Juster. After more traditional work as translator of Latin lyrics with turns at both Horace (2008) and Tibullus (2012), he has turned his scholarship and musical ear to Late Antique and Medieval Latin verse, first with Saint Aldhelm’s Riddles (2015), then the elegies of Maximianus (2018). As great as these efforts are, he is to be commended all the more for now turning our attention to one of the most prolific and woefully misunderstood periods of Latin verse production: the seventeenth century.

For an English audience, John Milton (1608–1674) is the best candidate for this treatment. In post-Reformation England, Milton’s Latin verse stays true to a classical style so the Latin student will find the syntax and grammar familiar. Like any precocious youth, Milton’s allusions show his wide and deep reading; but with Juster’s notes on Milton’s biblical and classical references the student should not have too much difficulty. At 718 verses, the book of elegies is about the perfect size for a lower-level advanced Latin seminar for undergraduates. But with Juster’s lucid translations, notes, and introduction, the book should equally find its place in any course considering the poetry and thought of John Milton or English literature of the period.

But Juster’s edition is not only for the Latin student or undergraduate. Any devotee of good poetry will find plenty to delight them in Juster’s translation of the seven long elegies that constitute the bulk of Milton’s little book. The themes are an excellent introduction to the full gamut of two millennia of Latin elegy. We find a couple of mournful elegies, one on the death of a Oxford beadle and another on a Westminster bishop. Three epistolary elegies put his work in context with Latin verse production of the time, especially Elegy 4, which Milton directed to his tutor Thomas Young, who was then in Hamburg. Did Milton imagine this as a possible means of raising himself to international attention?

But Elegies 5 and 7 find Juster at his best in rendering the Latin into delightful English that shows a side of Milton that many would not expect. Elegy 5 is a beautiful reflection on spring, with elegiac love overtones: “Am I fooled? Or does vigor come back to my poems, / And does desire, spring’s gift to me, appear?” But Elegy 7, with its heavy allusions to Ovid’s Amores, most clearly demonstrates that Milton’s debt to Ovid goes much deeper than the well-researched connections between Paradise Lost and the Metamorphoses. One does not need a degree in Classics to appreciate the lovely, playful opening to Elegy 7:

Seductive Venus, I did not yet know your rules
And my heart was devoid of Paphian fire.
I often scorned those boyish weapons, Cupid’s arrows,
And the divinity, Love, of your nature.
I said, “Boy, shoot down harmless doves; unmanly wars
Are proper for a youthful general.
Or, pipsqueak, lead your pompous triumphs over sparrows,
Those are the trophies worthy of your warfare … (Elegy 7.1–8)

That Milton himself was aware of just how different his readers would find these elegies from his later work can be seen in the short postscript that ends by declaring, “So even Cupid with his arrows fears the cold / And Venus dreads the strength of Diomedes.” So much for the lovesick youth of Elegy 7 who confessed, “Trust me, no one has burned up so unhappily.”

As delightful as these longer elegies may be, most casual readers and Latin students looking to test the waters of Milton’s late Latin poetry will probably first turn to the eight shorter pieces that were appended to this collection. The first four consider the Gunpowder Plot, which, considering that the event took place three years before Milton was born, testify to its hold on the Protestant imagination in England during the seventeenth century. Decades after Fawkes and his conspirators were hanged, drawn, and quartered a young Milton will write:

Isn’t it true, you Beast who prowls the seven hills
That you attempted giving James to Heaven? (In Eadem I.1–2)

Along with this and suitable references to Parliament ascending to heaven like Elijah on his chariot of fire, we find him appending a little four-verse epigram in praise of the inventor of gunpowder as someone greater than Prometheus (In Inventorem Bombardae). For those familiar with Paradise Lost, this epigram seems the seed that would grow into the long and powerful descriptions of the demonic discovery of gunpowder in Milton’s epic deptions of war in heaven.

While these five short poems might be considered epigrams rather than elegies because of their provocative subject matter, the final three elegies, all addressed to the Italian singer Leonora Baroni (1611–1670), find Milton returning his most Ovidian roots. Not only are themes, metaphors, and allusions completely pre-Christian, but even Milton’s meter looks to Ovid’s Amores with its tendency to internal rhyme. The last of these elegies, where he compares Leonora to the siren Parthenope from Ovid’s Metamorphoses, is worth quoting in full:

This poem provides the best justification for Juster’s translation. To try to render this elegy in the English of Milton’s time would not do it justice. In Latin, Milton expresses himself pithily in a style completely different from the great and more weighty English with which we are familiar. Listen:

Why tout, duped Naples, the famed shrine of clear-voiced Siren
Parthenope, the child of Achelous,

A coastal Naiad, dead upon your shores, who left
Her sacred body to a Naples pyre?

She certainly survives, and traded sounds of loud
Posilipo for the Tiber’s pleasant waters.

There, honored by the zeal of sons of Romulus,
She is entrancing men and gods with song. (Ad Eandem II)

This is not to say that such moments of levity and haunting beauty do not inhabit Paradise Lost in the descriptions of a prelapsarian Eve or the Garden itself. But the reader who knows this aspect of Milton from these elegies will likely have an ear better attuned to find these and contextualize them in the whole of Milton’s poetic imagination.

In his prefatory remarks, Juster states that the secondary purpose of this book is “to offer a small amount of more obscure information in order to spark conversations by scholars.” In his notes and selected sources, Juster provides a ready resource both for the Latinist who is looking to begin extending the time period in which she operates and for the English scholar who is looking to understand Milton’s debt to antiquity.

That said, the notes could be improved by removing references to the eighty or so minor textual variations between the 1645 and 1673 editions. Most of these are minor (e.g. Deos vs. deos) or are differences in punctuation. These would normally be handled by an apparatus criticus, which obviously for ease of accessibility doesn’t belong in an edition such as this.

But this is trivial in comparison to the great good that Juster has done the scholarly community by offering such a delightful (and affordable!) edition of these poems. One hopes that Juster will soon follow up this edition of the Elegiarum Liber with similar editions and translations of Milton’s other Latin verse.

Patrick Callahan is director of the Humanitas Institute.