Kierkegaard Is for Lovers 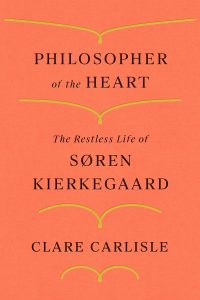 Philosopher of the Heart: The Restless Life of Søren Kierkegaard
by Clare Carlisle.
Farrar, Straus and Giroux, 2020.
Hardback, 339 pages, $30.

It is relatively easy, if perhaps a bit crude, to draw a dividing line between two groups of great philosophers: those whose lives we pass over without comment, and those whose personal experiences continually whet our appetites for more. Does anyone know, or care, what Hegel ate for breakfast? Or find Kant’s walks around Königsberg essential to understanding the Critique of Pure Reason? Or give more than a passing prurient thought to Descartes’s giant mechanical doll? By contrast, Socrates has captivated readers for millennia not just as a thinker, but as a character—his mannerisms, tics, and experiences delight and enthrall as much as his points about virtue.

Søren Kierkegaard (1813–1855) has managed the rare feat of getting lumped into this second group of philosophers despite living a life more conducive to the first category. Unlike his heroes Socrates and Jesus, he did not lead a life that ended in state martyrdom. Nor did he witness world-historical events swirling around him; the protests of 1848 that shook Europe made only slight tremors in his homeland of Denmark. He did not even suffer the romantic fate of his near contemporary Nietzsche, who wound up in an asylum. Rather, he lived a rather bland life as the youngest son of a successful, pious Copenhagen merchant. He studied for ordination, read and wrote much, and had one sad, doomed engagement, after the dissolution of which he dedicated himself even more feverishly to his authorship. True, he frittered away his inheritance, but unlike glamorous contemporary failsons he spent his fortune not on exciting frivolities like cocaine and orgies, but on financing the publication of his books (though he did have a dandy’s taste in fine clothing).

So why does Kierkegaard persist in our collective memory as a figure of intensely personal interest? Why do readers who catch the Kierkegaard bug feel compelled not only to tear through his books, but to delve into his life details? For it has been ever thus, even in Kierkegaard’s own day, and certainly ever since his translation into English beginning in the 1930s. Furthermore—and more significantly—how can we approach Kierkegaard’s ideas, many of which feel like they are just coming into their own in our age, in such a way that connects those ideas to his life without dismissing them as mere byproducts of biography?

Clare Carlisle offers compelling answers to all these questions in her new book Philosopher of the Heart, a hybrid between a biography and an introduction to Kierkegaard’s works. Coming barely a decade after Joakim Garff’s magisterial (though controversial) doorstopper of a biography, Carlisle’s book artfully dodges the inevitable question of need—another Kierkegaard biography? in this economy?—by targeting not specialists but amateurs, or would-be amateurs, in the original sense of that word: Kierkegaard, according to Carlisle, is for lovers. As she ties together Kierkegaard’s passion for life and for wisdom, and her own fascination with the man, she presents to Kierkegaardian neophytes a book designed to seduce, and to hardened veterans of his work a call to remember their first love.

It makes sense, then, that Philosopher of the Heart centers on the words of Kierkegaard himself, for as Carlisle argues, writing became “The most vibrant love of his life—for all his other loves flowed into it.” Throughout the book Carlisle quotes assiduously from Kierkegaard’s writings; not only his published works, but his journals and papers and letters. In this Carlisle follows the example of Walter Lowrie, doyen of Anglophone Kierkegaard studies, whose 1938 book Kierkegaard drew two-thirds of its words from direct quotation. Carlisle wears her quotations more lightly than Lowrie, however, integrating them fairly seamlessly into the whole of her argument (Lowrie would think nothing of devoting whole pages to cement-block quotations). The result is compelling: readers receive high doses of Kierkegaard’s vibrant prose, but Carlisle acts as a steady guide through the thickets of his thought.

Structurally, Philosopher of the Heart reads more like a contemporary memoir than a biography, with Carlisle employing a fractured narrative that jumps back and forth in time. This could seem like a gimmick, but it mostly works, for two reasons. First, it feels like the sort of gambit Kierkegaard himself would have liked, as it gives his life a certain effusive, elusive feel. Second, rather than a linear march through facts, the structure gives the book a Kierkegaardian sense of “the moment,” his version of Wordsworth’s “spots of time,” where eternity and temporality fold together and humans make leaps of the will that ripple out into their lives. Carlisle chooses two such key moments in Kierkegaard’s life as pivot points in her narrative.

Section I centers on Kierkegaard’s train journey home from Berlin in 1843, just after he has entered into the most fruitful period of his authorship. From this vantage point Carlisle has Kierkegaard contemplate the various themes of his early career, the cluster of anxieties surrounding faith and choice that course through his first masterpieces: Either/Or, Fear and Trembling, and Repetition. In Section II, she jumps to 1848, as Kierkegaard, running out of money, prepares to sell his childhood home to keep himself in enough money to continue publishing. She uses this melancholy moment as a springboard to catch the reader up on the major developments of Kierkegaard’s life at this point, a technique she gives the Kierkergaardian label “life understood backwards.” The final section adopts a more straightforward chronology as it barrels toward Kierkegaard’s final clashes with the Danish church and his early death at age forty-two. Mixing biography and criticism, Carlisle offers at each point descriptions and assessments of Kierkegaard’s writings, focusing on the major works while making time for smaller but still valuable pieces, such as the poignant sermon collection The Lily of the Field and the Bird of the Air.

It is in the long middle section that Carlisle strikes the best balance between drawing in the newcomer and keeping the experienced Kierkegaard reader interested. Too often sketches of Kierkegaard focus exclusively on the two most towering figures in his life: his father, Michael Kierkegaard, and his erstwhile fiancée Regine Olsen. While both are incredibly important in Kierkegaard’s development as a person and author, too often critics use them as a dual cryptonomicon by which to explain every facet of Kierkegaard’s life and thought. While addressing their significance, Carlisle also brings in elements of Kierkegaard’s life that usually go unnoticed, including his status as doting uncle and the ties of the Kierkegaard family to the Danish pietist movement—a religious affiliation in some tension with their status as members of the more staid state Lutheran church.

Most notably, Carlisle devotes a good chunk of space to a person often lost in the shuffle: Kierkegaard’s mother Anne. Michael’s second wife, Anne began as the Kierkegaard’s housekeeper before getting promoted from within after the death of the first Mrs. Kierkegaard. Because of her lack of education or a compelling backstory, she has often been pushed aside in favor of Michael, the self-made Jutland peasant who once cursed God and lived with a tortured and torturing conscience for the rest of his days. Carlisle, who has previously written on Kierkegaard’s views of the Virgin Mary, recaptures the importance of this other mother in the philosopher’s life, showing convincingly that her tranquil love acted as a counterbalance to Michael’s stormy, stern faith. As far as psychological readings of childhood go, you could do much worse than this affecting passage from Philosopher of the Heart:

He learned to love the first woman in his life passionately, tenaciously, in search of solace, longingly yet secure of his own worth, with the arrogance of a clever child. He loved the first man in his life fearfully, reverently, defiantly, jealously, with the eagerness to please of a clever child. Of course he did not understand, back then, that those first forms of loving were a formation, replete with repetition; that those childish ways cut a path he would retrace long after leaving home.

At times Carlisle does veer too closely to an exclusively psychological reading of Kierkegaard’s life. In particular, her treatment of the Kierkegaardian “single individual” risks substituting biography in for meaningful engagement with a crucial concept. Though she acknowledges the broader significance that “‘Every human being is the single individual’” she most often discusses this idea, in which Kierkegaard identifies his ideal, individualized reader, solely in the context of Regine Olsen. While Olsen did permanently linger in Kierkegaard’s thoughts, to read this concept only in the light of Regine—as Carlisle almost, but not quite does—occludes Kierkegaard’s broader self-conception as an author.

Still, this is a minor concern in an otherwise bracing, provocative book. Carlisle signals her place in the Kierkegaardian interpretive tradition on the dedication page, writing in honor of her dissertation director George Pattison. Pattison, to my mind the most insightful Kierkegaard critic of the past quarter-century, has been instrumental in re-presenting the interplay between religious thought and aesthetic experimentation in Kierkegaard’s work. Clare Carlisle follows in her teacher’s footsteps with Philosopher of the Heart, presenting a Kierkegaard at once both startlingly personal, thornily devout, and aesthetically bold.

It is this Kierkegaard that has proved most compelling to readers over the years, the thinker who, even in his somewhat obscure battles with the church hierarchy or tabloid press of his own day, continues to feel urgent in the present moment because, as Carlisle points out, his “concepts and arguments arise from the compelling drama of being human that unfolds within every person.” For those interested in Kierkegaard’s legacy, but bewildered by the sheer volume of his writings, Carlisle opens a compact but insightful gateway onto his work, one designed to entrance as well as inform. For those of us who have been reading the man long enough to forget why we began, Carlisle offers a bracing reminder of the human drama, the passionate conviction, that drew us to Kierkegaard in the first place.

Asher Gelzer-Govatos is a Visiting Professor of English at Doane University. He completed his PhD in Comparative Literature at Washington University in St. Louis, writing on the reception of Kierkegaard in 20th Century British literature. His writing has appeared in publications including The Hedgehog Review, Books & Culture, and The Week. He is also the cohost of The Readers Karamazov, a podcast on literature and philosophy. You can follow him on Twitter @conceptofdredd.