Leviathan at Bay, at Last? 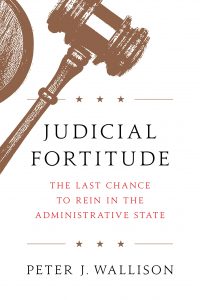 When, in the decades to come, historians look back at the early twenty-first century, they will marvel at the decay of the bedrock principle of American constitutionalism, that ours was supposed to be, in the words of the Massachusetts Constitution of 1780, “a government of laws and not of men.” The Framers, like Hamilton, Madison, and Jay, believed that no republic could exist without adherence to the rule of law, and that untrammeled political power, of a sort that Great Britain had displayed in its monarchy and its hereditary aristocracy, led inevitably to arbitrary and unfair action and concomitant corruption of the government, as it became the plaything of competing elite factions.

The architects of the United States Constitution of 1787 thus constructed a polity where power was supposed to check power, where by setting up three competing subdivisions, the legislative, executive, and judicial bodies would seek to restrain each other within their legitimate bounds, none of them could long exercise arbitrary power over the others, and the historical fate of republics as well as monarchies—corruption—could be avoided. This system worked tolerably well for almost two centuries, as the nation grew in power and wealth, and, more importantly, as adherence to the rule of law allowed many Americans willing diligently to invest time and resources in agricultural, manufacturing, and entrepreneurial activities to bring the country to a level of prosperity never before known. Until the Great Depression, with the exception of our Civil War, our Constitutional scheme worked quite well, and did precisely what the framers hoped.

Something changed with the administration of Franklin D. Roosevelt. The Progressives who took over the federal government seemingly decided that the constitutional scheme was inadequate to meet the exigencies of the times. In the first one hundred days of that administration, they set in motion a plan that resulted in the creation of virtually a fourth branch of government, embodied in a plethora of new federal agencies created to jump-start the economy to boost us out of the Depression and “put Americans back to work.” Some of this plan was rejected by the courts, but enough survived so that the trend continued the rest of the century, agency piling upon agency. By the turn of the last century, hugely enlarged operations of executive-branch agencies, and a myriad of regulatory, investigative, and intelligence-gathering bodies, such as the SEC, the FTC, the EPA, HUD, DOJ, FBI, CIA, DIA, and many others had coalesced into what we now know as the Administrative State.

Some legal doctrines exist to keep these dubious fourth-branch bodies within bounds, but they are rarely used. Especially towards the end of the twentieth century, the courts had instead come to defer to the agencies, pursuant to the notion that the agencies contained the experts, the experts knew what they were doing, and it was best for the courts to allow them to do their jobs. This deference, along with a growing disrespect for the rule of law in the law schools, as the decisions of the Warren and Burger Courts that granted a larger role to the federal government in taming the power of the states and implementing the pieties of liberal orthodoxy were celebrated, resulted in an executive-heavy federal government peaking in power during the Obama Administration. That administration, in effect, nationalized a sixth of the economy in its Patient Protection and Affordable Care Act (“Obamacare”), and unblushingly promoted a federal government that would care for its people (not just citizens, but also undocumented resident aliens) from cradle to grave.

This overreach by the federal government, this profound loss of the kind of individual liberty the 1787 Constitution was written to guarantee, is the best explanation for the election of Donald Trump in 2016, a long overdue reaction to the machinations of a federal Leviathan. The Progressives’ ideal of a government run by wise experts who know more than the American people is widely shared in the academy, the Democratic party, and the media, and thus we have been slow to recognize this profound threat to our constitutional order. Fortunately, perceptions are beginning to change, and not just through the election of Trump. An increasingly large segment of legal academia, for example, spurred by the foundation of the Federalist Society for Law and Public Policy Studies in 1982, a group of socially conservative and libertarian lawyers and law students, has revived respect for the checks and balances of the Constitution, and, in particular, the separation of powers and of shared power between the state and federal governments, known as federalism.

The administration of George W. Bush began increasingly to staff the federal bench with judges influenced and in some cases proposed by the Federalist Society, and this has increased under Donald Trump, who began to consult the Society as a candidate, and who has continued to be influenced by its views as President. We are now beginning to see an increasing number of works of scholarship advocating a return to what is often referred to as an “originalist” or “textualist” view of the Constitution, one championed by the Federalist Society, one embraced by the late Justice Antonin Scalia and by Clarence Thomas, and one where the limitations on federal power are taken more seriously.

The book under review is a splendid example of that trend, as are several other recent works published by the now-vital Encounter Press, led by the brilliant conservative polemicist, Roger Kimball. Examples are inspired monographs by Michael Walsh, F. H. Buckley, and Philip Hamburger. Those authors have broadly examined how we might recover the now nearly lost sensible notions of the framers in our culture, politics, and government, and Judicial Fortitude, as its subtitle clearly indicates, is a worthy contribution to this effort.

Peter J. Wallison writes with clarity, passion, and, in particular, common sense. He limns the history of many of the developments outlined here, but more important is what he proposes we do about them. His book is essentially a plea to the federal judges to stop mindlessly deferring to federal agencies, and to embrace the effort to bring us back to the framers’ vision. The work is also a cogent entreaty to Congress itself, to stop abdicating its responsibilities and to return actually to legislating instead of relying on the federal bureaucracy to implement its own discretionary policy. In this brief but profound exegesis of the misconceived nature of the administrative state, the perfidious abdication of Congressional responsibility, and the current strangulating mass of regulatory law, Wallison, former White House Counsel to Ronald Reagan and now occupant of the Arthur F. Burns Chair in Financial Policy Studies at the American Enterprise Institute, makes accessible even to non-lawyers precisely what has gone wrong and how it might be put right.

Wallison admirably recognizes that ours is a republic, not a democracy, but he also understands that without some means of reigning in the Administrative State any vestiges of what popular sovereignty remains will soon be lost. His book could not be more timely. At some level many Americans (even some Democrats) have begun to understand that government by an unelected bureaucracy is what we have now, and that such a government is not only inconsistent with Constitutionally guaranteed liberties but with the rule of law itself. If every newly appointed federal judge were given a copy of Judicial Fortitude, the chances of a recovery of the Framers’ design would increase dramatically.

Stephen B. Presser is the Raoul Berger Professor of Legal History Emeritus at Northwestern University School of Law, and is the author of Law Professors: Three Centuries of Shaping American Law (West Academic, 2017).