Liberty, or Liberties, or Leviathan? 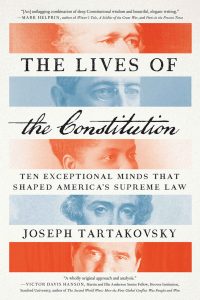 Joseph Tartakovsky’s Lives of the Constitution: Ten Exceptional Minds that Shaped America’s Supreme Law is a perceptive and refreshingly original book that deserves to be widely read. Lives of the Constitution is clearly the product of much reflection and study concerning the nature of the U.S. Constitution and its role in our national life. One can learn a great deal from Tartakovsky’s book, not only about the ten “lives” that he chooses to recount but more broadly about our national history and the unique characteristics of our national identity.

A fundamental decision in writing this book was to focus on the “lives” of the Constitution, those individuals who played an important role in defining and applying the principles of the Constitution, rather than on general principles or, for that matter, the work of the Founders. This decision lends vitality and interest but also opens the door to an interest in personal histories, a structural choice that may explain the relative indifference toward Jefferson in favor of Hamilton, or in the inclusion of Ida B. Wells-Barnett, not so much a constitutional thinker as an ardent and effective political organizer. Clearly, an element of special pleading has recently elevated Hamilton to current eminence in the popular mind, but the truth remains that it was largely Hamilton who saddled us with the burden of a strong central government that, in our day, has grown in such an unbridled manner.

Certainly, a majority of the Founders would not have favored such an expansion of government powers nor the tendency of the federal courts to adapt rather than apply the law as written. As Tartakovsky points out, the Founders made the amendment process difficult for the reason that they did not wish to see amendments readily adopted. What they could not restrain is the alarming arrogance of federal judges and justices altering the Constitution via unwarranted interpretation. The increased “constitutionalizing” of our society, as Tartakovsky suggests, limits our ability to conceive of liberty as a natural condition requiring no ratification by legislature or court. Our Constitution is especially definite and enumerative for the very reason that the Founders conceived of government as playing a limited role in citizens’ lives. Surely, as Tartakovsky argues in an informative chapter on James Wilson, it is true that “we have more liberty under a government than outside of one,” but it is equally true that we have more liberty outside of a despotic government than under none at all. It seems incontrovertible, despite Tartakovsky’s emphasis on disagreements among the Founders, that nearly all would have been troubled by the powers now usurped by our federal government.

Most troubling in this respect is Tartakovsky’s discussion of Woodrow Wilson’s “Darwinian” conception of constitutional powers. Tartakovsky wisely cuts through the rhetoric of “organic” government and sees that “what Wilson actually had in mind was a defense of bold new uses of government power” envisioned, Wilson believed, by earlier thinkers such as John Marshall or Daniel Webster. Despite that “defense,” Wilson was in fact a radical progressive intent on transforming American government from the limited role it had played over the first century and a half of American history into a leviathan that controlled many aspects of business and personal life. Tartakovsky’s resort to Herbert Croly’s Promise of American Life (1909) in defense of Wilson’s Progressivism, with Croly’s arguments for the “popular will” and an “absolute popular government,” is hardly reassuring. It is not just that Wilson was carried along in an age of universal reform extolled by Croly and others—he was intensely supportive of the centralization of power in Washington, and with it the loss of rights and choices at the local level.

The focus on individual “lives” makes it difficult for Tartakovsky to develop a strong principle of organization for the book. Despite the author’s claim that his lives “blend together in a continuous flow of history,” in many respects the views of such figures as Justice Stephen Field and President Wilson, or of Wilson and Justice Scalia, are irreconcilable, and it would be well to recognize the fact. While Tartakovsky writes with eloquence and skill, his characterization of nearly all perspectives as merely “disagreements” in the flow of evolving opinion diverts attention from intractable conflicts of the kind that are particularly acute at the present time.

Despite these caveats, there is a great deal of acute analysis in Lives of the Constitution. Among the more interesting chapters is that devoted to Justice Field, not only the longest serving justice but also among the most perceptive in interpreting Article I, Section 10, with its language forbidding economic redistribution by the state. As Tartakovsky suggests, with the rise of progressive politics in our time Field may turn out to have been among the most far-sighted justices in the history of the Court.

Another thoughtful section is devoted to Justice Robert H. Jackson, whose opinions, Tartakovsky maintains, offered “two enduring lessons”: first, “that no right is absolute and so we must always discriminate between justified and unjustified exercises of a ‘right,’” and second, “that there is in fact no such thing as ‘liberty,’ but only liberties, ever jostling against one another.” In Jackson, Tartakovsky finds a representative of pragmatism and “good sense,” one who brought humility and humanity to the task of judging the law. The preeminent example of such a justice in our time is, of course, Antonin Scalia. Justice Scalia’s “mission,” as Tartakovsky sees it, “was to alert Americans that their Supreme Court, with ‘almost Czarist arrogance,’ is slowly usurping their democratic powers.” Indeed, with his much-touted philosophy of constitutional originalism, Justice Scalia consistently opposed the expansion of judicial power, just as he opposed legislative and executive overreach.

Tartakovsky’s analysis is, at many points, highly perceptive, and one will be richly rewarded in reading this intelligent and well-written book. Among the many suggestive ideas in Lives of the Constitution is Tartakovsky’s conception of the evolving sense of our founding documents as the product of shifting popular opinion percolating up to legislators and justices. By its very nature, Tartakovsky’s approach challenges the idea that America has succeeded in an exceptional manner due to the strength of a stable consensus ideology, and that such an ideology is encoded in the Declaration and Constitution in a manner designed to regulate popular opinion and not to be easily altered by it. Traditionalists might wish for more emphasis on those elements of the Constitution that have restrained, or were intended to restrain, rapid change in the idea of America.

Another provocative argument in this book is the repeated assertion that liberties granted to some inherently diminish the liberties of others. The author’s discussion of free speech is a case in point. Certainly, the defense of pornography as “free speech,” while granting rights to some, by its very nature detracts from the freedom of others who wish to live in communities free of pornographic “art,” but this oft-cited example presents a false dichotomy: free speech, in its true sense, involves the far weightier matters of what does the Constitution, and our society, think free speech is for. No one’s liberty is diminished when authentic free speech and other fundamental liberties are freely practiced. The only entity that is truly “harmed” is a government that demands endless concessions on the part of its people, including judges who develop constitutional theories at odds not only with the text but the settled practices and expectations around the text. Justice Scalia understood the fundamental and unqualifiable nature of human liberty. As Tartakovsky rightly points out, Scalia’s appeal to “‘the constraint of the text’” and “‘the constraint of historical practice’” was meant to curtail what he saw as a dangerous assault on liberty by unelected courts and bureaucracies. Thoughtful persons know that the same liberties are granted to all in our democracy, and they are so because they are grounded in fundamental truths of human nature.

Inevitably, an analysis that traces the interpretation of the Constitution over time may come to suggest a living document whose meaning can be adapted, gradually or swiftly, to changing social and technological conditions. The fact, however, that horseless carriages or social media were unknown to the Founders does not lessen the Constitution’s permanence and universality: social media and horseless carriages are ephemera, as are the senseless expressions of pornographers. What is changeless is life itself, the family, God, the dignity of labor, and the abundance of God’s creation. It was these essences that guided the Founders as they wrote of “justice,” “domestic tranquility,” “common defence,” and the “blessings of Liberty.” Although the Constitution does descend into particulars, amusingly so at times, its general tenor is lofty and philosophical because its purpose is to ground a system of government on the unchanging foundation of nature. While there was political and philosophical division among the Founders, they shared common beliefs regarding the human condition and the eternal yearning for liberty and opportunity. The Founders did not labor to express this vision of freedom with the intention that others afterward would restrict or qualify their defense of liberty.

Although I find Tartakovsky’s approach imperfect, I respect the considerable intellect and effort that has gone into his writing. The chapters on James Wilson, Stephen Field, Robert H. Jackson, and Antonin Scalia are particularly helpful. In a book of this length, one can expect only highlights, of course, but one would have wished for more of what the author does so well: lucid explanation of the intricacies of the Founders’ intentions, as best we can understand them, and of the text of the Constitution as it has been interpreted by succeeding generations.

Joseph Tartakovsky’s Lives of the Constitution is a rewarding account of some of the more important individuals who have contributed to our current understanding of the Constitution. Among its virtues is the skill with which the author translates difficult cases and the history behind those cases into readable discussions of a diverse group of thinkers. Although not all will agree with the author’s conception of an evolving Constitution ultimately propelled by the popular will, Tartakovsky’s writing is consistently thought-provoking. His presentation is perceptive and original, and anyone reading Lives of the Constitution will gain much from doing so.

Dr. Jeffrey Folks taught for more than thirty years in universities in Europe, America, and Japan. He has published many books and articles on American culture and politics, including Heartland of the Imagination: Conservative Values in American Literature from Poe to O’Connor to Haruf.