Lincoln, Burke, and the Politics of Prudence 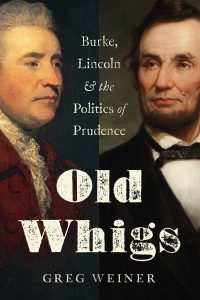 More books have been written about Abraham Lincoln than any other man, excepting only Jesus Christ, who all must admit is a special case. That is a boon to readers eager to learn about our sixteenth president, but presents a daunting challenge to any scholar interested in writing something new about the man. In Old Whigs: Burke, Lincoln, and the Politics of Prudence, Greg Weiner has done just that, detailing Lincoln’s political philosophy alongside that of Anglo-Irish parliamentarian and scholar Edmund Burke in an effort to get at the meaning and importance of prudence in political life.

Weiner, a professor of political science at Assumption College, devised a difficult task for himself in defining a concept so nebulous as prudence. Aristotle called it “right reason applied to practice,” but what is “right reason”? St. Augustine called prudence “the science of what to desire and what to avoid,” and St. Thomas Aquinas used both of these definitions in his longer discussion of the topic. But even that great thinker could not give a simple rubric of prudence.

It is likely that no brief definition could completely comprehend the virtue, though these all point us in the right direction. For Edmund Burke, the concept meant “a moral rather than a complexional timidity.” That is to say, Burke urged caution not out of cowardice but out of humility. His conservatism was grounded in modesty, and in recognizing that neither he nor any man had all of the answers. In the face of uncertainty, prudence dictates hesitating before making a drastic change.

Yet, maddeningly for those in search of a precise guide to life, Weiner tells us that prudence also demands bold action at times. Burke, at times, demanded such boldness from his country’s government, especially when it meant confronting the regicides of revolutionary France. Simple caution might call for a negotiated peace with the Jacobins; prudence demanded unyielding resistance to the destructive effects of the French Revolution. Lincoln, too, mixed caution with indefatigability when faced with the challenges of secession and Civil War. Even before his election, Lincoln’s prudence separated him from other abolitionists. He argued against slavery logically and effectively in his debates with Stephen Douglas in 1858, but understood the political necessity of moving gradually toward the ultimate goal.

Lincoln, like Burke, also knew when prudence demanded he act drastically. Gradual abolition was fine in peacetime, but when the dispute over slavery erupted into war, the political and moral calculus changed. Lincoln’s Emancipation Proclamation was a bold stroke, one that the Lincoln of a few years earlier might have decried. But this, too, Weiner writes, was prudence in action. “Prudence,” he tells us, “demanded accommodation but not surrender to circumstances.”

Both Burke and Lincoln had strong beliefs in right and wrong, but both also recognized the constraints placed upon them by their respective constitutions. In Burke’s case, the unwritten British constitution demanded both more and less of its subjects than America’s written document. Nothing was forbidden if Parliament and the monarch agreed to it, but that freedom of action was weighted down with centuries of tradition. Its unwritten-ness demanded more deference and self-control. In America, on the other hand, the restraints were clear, but the possibilities of amendment were nearly endless, as the Thirteenth Amendment showed in the last year of Lincoln’s life.

For Lincoln, the idea of an intergenerational contract was noted in his Second Inaugural Address but signaled even more clearly, according to Weiner, in his 1838 Lyceum Address. In that speech, Lincoln preached of the need for a deep respect for the law even as he argued for changing it:

[L]et every man remember that to violate the law, is to trample on the blood of his father, and to tear the character of his own, and his children’s liberty. Let reverence for the laws, be breathed by every American mother, to the lisping babe, that prattles on her lap—let it be taught in schools, in seminaries, and in colleges; let it be written in Primers, spelling books, and in Almanacs—let it be preached from the pulpit, proclaimed in legislative halls, and enforced in courts of justice.

This is a deep devotion to the law, clearly, but even in their similarities, Burke and Lincoln highlight differences between them in these statements. Burke’s traditional contract is not one anyone would think of as written down. Like his constitution, his intergenerational compact is informal and unwritten, known by feel more than by rote. Lincoln, contrariwise, is the son of a nation built on its written constitution, and it is reverence to that writing—not to an informal understanding of principles—that he encouraged in his address.

This is not the only difference between the two, and Weiner devotes a section of his book to that point. Lincoln, as far as we know, never explicitly claimed the legacy of Edmund Burke, nor would he have likely been considered especially conservative in his time. Certainly his political opponents did not see him as such: white Southerners feared Lincoln’s supposed radicalism so much that they began seceding from the Union before he even took office.

And yet their fears were disproved once the war began. The head of a radical party, Lincoln did ultimately practice a Burkean prudence in his administration of the executive branch. While, as Weiner notes, Lincoln’s beliefs were more grounded in universal theory than Burke’s were, his application of those theories showed the restraint and modesty necessary to preserve the broad coalition working to defeat the slaveowners’ rebellion.

Burke and Lincoln came from different times, different nations, and somewhat different political traditions. Is it a stretch, then, to write of them as practicing a similar form of political prudence? Weiner answers the question by arguing that that quality was so important to both as to subsume other, less important differences. His point is well-argued. In doing so, he follows Russell Kirk, whom he quotes for that proposition that Lincoln, despite the rebels’ claims to the contrary, was deeply interested in order: “Lincoln was a man of order, not a man of theoretic dogmas in politics.… In his immediate object, the preserving of the Union, he succeeded through the ancient virtue of prudentia.”

A man’s temperament informs our view of the theory behind it. Lincoln and Burke both present to the world an image of prudentia, despite underlying differences in their political dogmas. Weiner’s work here is briskly paced but packed with ideas, giving the reader a new look at these two well-examined lives and the ancient virtue that united them.

Kyle Sammin is a lawyer and writer from Pennsylvania, and the co-host of the Conservative Minds podcast. Follow him on Twitter at @KyleSammin.