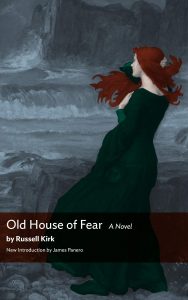 Russell Kirk’s Old House of Fear recounts Hugh Logan’s trip from Michigan to Carnglass, a scarcely known island that lies off the coast of Scotland but is largely isolated from it. Logan has been hired by an aging iron magnate, Duncan MacAskival, who, tired of the iron mills that built his fortune, dreams of retiring to Carnglass, the ancestral homeland of his clan. Logan’s mission is to negotiate the purchase of Carnglass and its ancient castle, the titular “Old House of Fear.” Since Mr. Logan is a lawyer, and a good one, the task appears simple enough. And yet Logan finds himself almost immediately in a world of peril, starting from the treacherous rocks and torrid waters guarding Carnglass, to the presence within it of the diabolical Dr. Jackman, who controls the island through his influence over the aging Lady MacAskival and seeks to consolidate his mastery of the island through marriage to its rightful heiress, the beautiful red-haired Mary MacAskival. Jackman is backed by a band of trained killers, while Logan arrives on Carnglass unarmed and alone, unprepared for the dangers that await him and unaware that the fate of Carnglass may lie in his hands.

Old House of Fear builds much of its suspense on its hero’s lack of resources. Hugh Logan is a war veteran, an able athlete, and a good man in a fight, but he finds himself outgunned and outnumbered. It is even arguable that his main opponent, Dr. Jackman, is his intellectual superior. Certainly the story offers no hint that Logan would stand a chance against Jackman’s henchmen. When Logan does find himself armed with a single gun, the weapon becomes a mixed blessing at best, as its use against any of Jackman’s gang would almost certainly bring upon him their combined wrath and result in his death. Isolated from the outside world, surrounded by hostile forces, Logan’s situation appears hopeless.

Yet accomplished as he might have been as a soldier and a lawyer, Logan was also selected for the task of negotiating Carnglass’s purchase due to his innocent looks and his abilities as an amateur stage actor. Duncan MacAskival notes his admiration for a recent performance by Logan and hopes that Lady MacAskival will find him a charming and even disarming presence. Ultimately, it is these seemingly innocuous traits that the Scottish-American lawyer is forced to rely upon to keep himself alive.

Fifty-eight years after its initial printing, Criterion Books has released a new edition of Russell Kirk’s best-selling classic. While the novel itself remains unaltered so far as I can tell, the current edition features the addition of a wonderful introduction by James Panero that offers much insight into both Kirk and his works. This edition also restores Kirk’s dedication of the volume: “This Gothick tale, in unblushing line of direct descent from The Castle of Otranto, I do inscribe to Abigail Fay.” This inscription, brief as it is, offers valuable revelations regarding the Old House of Fear and its residents.

For one thing, it explains the Saturday Review’s enthusiastic endorsement, found in a previous edition but without the context of Kirk’s dedication, which refers to the novel as an “unblushing Gothick tale” that offers up “wild excitement” and “sadistic violence.” Readers will now understand that it was Kirk’s own dedication the Saturday Review was paraphrasing. More illuminating, perhaps, is Kirk’s declaration of the novel’s “line of direct descent from The Castle of Otranto.” This not simply so readers might understand the influences of the author, but also because Old House of Fear is itself very much about the “lines of descent” connecting the past to the present. Long before Jackman landed on Carnglass, local legend speaks of a Norseman, Sigurd Askival, who rescued “Mary or Merin,” a “woman of remarkable beauty” with a “flowing mane of red hair” from the clutches of a creature known as the “Firgower, or man-goat.” It isn’t known whether Logan, Jackman, and Mary are reenacting an ancient drama, occupying roles filled anew with each generation, or outright reincarnations of the legendary figures. But what is clear is that the past does indeed exert some sort of mysterious influence upon the present.

Horace Walpole’s 1764 Castle of Otranto deals with the conflict between Manfred, who would usurp control of the titular castle by forcing into marriage the imperiled heiress Isabella, and Theodore, who, after accidentally stumbling into the conflict, ultimately seeks to thwart Manfred’s plans and rescue Isabella. If Hugh Logan and Mary MacAskival are in some way the Askival and Merin, they may also be Theodore and Isabella. Likewise, whatever chain of destiny links Jackman to the Firgower runs through to the Castle of Otranto’s would-be usurper, Manfred. And whatever strange forces compel the men and women of one age to repeat the struggles of a distant one were perhaps just as much at work in animating Russell Kirk himself to continue the tradition begun by Walpole two centuries after The Castle of Otranto was published.

Jeremy Seaton is a freelance writer in Michigan.