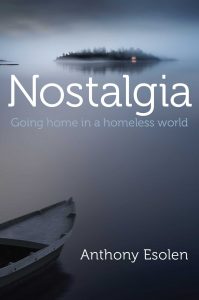 The declaration of political homelessness, feeling bereft of the consolation that being rooted in support for a political party can give, is a common refrain. Anthony Esolen, author of Nostalgia: Going Home in a Homeless World, would likely raise an eyebrow at these declarations. Like anything to do with procedural politics, they are a surface-level manifestation of a deeper issue, one that is affecting more and more people today. This is a feeling of being cast adrift, cleaved from a sense of place and rootedness. In short, people are more and more looking for a home. Where do we go once this political home is lost? Esolen answers this question over two hundred or so pages in a wonderful book, whose prose acts as a beacon to guide us to dry land over the dark waters of modernity.

Nostalgia is a soul-deep longing for a place to call home, a longing present in the great myths of the world of yesterday. This longing brings a bittersweet sense of joy and pain, each intensifying the other. Esolen, along with Augustine, encourages us to realize that, important though it is, this longing to return cannot ultimately be met in this life. As Augustine famously wrote, “Thou hast made us for thyself, O Lord, and our heart is restless until it finds its rest in thee.”

For Esolen, the limits of time and place mediate and allow us to access and appreciate the depth of beauty in the universal and eternal. However, as Esolen writes, “Ithaca is not a paradise.” We should not seek reconciliation by turning our place and time into an idol in order to salve the pain of our longing. Such idolatry risks pulling us down the path to a loss of hope in the immortal sacred, the sense that the meaning of our existence lives on after our death. Rather than idolize where we came from or where we are going, Esolen argues, nostalgia rightly understood provides the inspiration to appreciate and treasure the legacy of the past to the present, and provides a sense of value and meaning for the future. As Gustav Mahler put it, “Tradition is not the worship of ashes, but the preservation of fire.”

For Esolen, both the reactionary and the progressive are wrong: the former tries to find a sense of home by living amongst the ghosts of the dead past, making a dead faith for the living, to paraphrase Jaroslav Pelikan. As Pelikan writes, a tradition lives if it does not impose the past wholesale onto the present. For him, it is “a mark of an authentic and living tradition that it points us beyond itself.” The progressive, meanwhile, attempts to assuage the hole in his heart by a journey ever onward to a home in a future that never comes, attempting to outrun the inescapable conclusion that no matter how far and fast he goes in the outer world, the fact of his inner homelessness and isolation will always be with him. Belief in the “future,” Esolen writes, “is a pallid and frail mimic of that longing for an eternal home. It does not lay the foundation. It does not build the spire.”

Nostalgia, for Esolen, always needs cultivation in order to fulfil its potential as part of the human condition. As such, his attacks on the current trends in education are understandable. The move to make education all about the future is evident in the increasing focus on gaining skills for the job market rather than the teaching of the humanities. The goal of liberal education used to be to enable us to become more fully ourselves, allowing us to understand to a greater degree our flawed natures and appreciate the heights we can rise to and the depths to which we can sink. Again the focus on the future, and the active denigration of all aspects of our past in modern progressive education leaves pallid and frail individuals, cut off from their inheritance and unable to fall back on the intellectual capital of the generations from which they can draw inspiration, strength, and direction to navigate life’s journey. The paradox of modernity is that “it refuses to define progress in any way accordant with the nature of fallen man and therefore rejects the hard-won wisdom of our forebears, thereby rejecting the foundations upon which alone we can build.” It turns out that perhaps “useful” education is perhaps not quite so useful after all.

If one’s soul is only half-formed, and one’s nature remains only half cultivated, how can one fully live? All this has the effect of leaving young people with an even greater challenge before them: not only do they not know how to sail through the waters of liquid modernity to the dry land of hope in the eternal, they do not even know how to articulate that such a place exists, or why they feel the emptiness they do. If sin is cutting ourselves off from God, and refusing to rejoin him, then our higher education establishments are selling this to young people, and loading them with debt to add insult to soul’s injury. If the Catholic Church is a field hospital, this book is part of the wider effort to mend our broken world.

This broken world is further fractured by the view of man as an isolated atom. Even so, we are souls joined to those who passed before and those who will follow on. Place and time provide the way to grow and maintain community. Both community and education could allow us to see that we can have a legacy, intellectually and spiritually. Nostalgia, the longing to go home, is also the longing to not find oneself alone, cleaved from the consolation of community and tradition, but instead rooted in the transcendent. As Esolen writes: “They who are cut adrift in time are like survivors of a shipwreck, each clinging to his own spar or beam. They who are at home in culture dwell in something that spans the generations and renews them, throwing bridges across the divides of class and sex and age.”

Everything in modern society now works against the cultivation of nostalgia, the individual soul in community and a sense of something beyond ourselves and our fleeting lives and even more transient desires. While we must ensure that there is space for evolution, the reigning worldview on both left and right is a pervasive radical individualism that proclaims the satisfaction of the atomic individual as the highest good, and the ultimate goal towards which our politics should be oriented. This has left us bereft of a sense of solidarity and direction. We are lost, thrashing around in an endless sea of unbounded freedom, drowning with an excess of choice that is becoming poisonous to our ability to live full and fulfilled lives. We are free from that which makes life meaningful.

The revolt against this emptiness comes in the identity politics of the alt-right and woke left. Both attempt to give a sense of community to those who lack it. But they offer only fake community, destined to kill any chance their adherents have of finding a sense of home. Franz Rosenzweig has argued that religion and the culture it creates expresses our need to believe that the meaning of our lives survives death, but grounding one’s identity in physical characteristics deifies mortality itself. Esolen’s book offers another way, where we can see the lighthouse calling us home to community that values the individual. Esolen’s Christian vision of the human person offers a far richer view of who we really are: individual souls enmeshed in a web of affection and obligation, rooted to a time and place. He reminds us that trying to assuage our longing for home by endlessly moving over the face of the earth leaves us stagnant and still where it really matters: our soul’s journey to its final resting place.

The false gods of progressivism and identity politics cannot provide the guidance nor the perspective we need to apprehend our final destination, and instead work to obscure it and send us to a place of cold misery. Esolen’s book reminds us that there is a space between lonely individualism and crushing collectivism. It is a book whose core message will only increase in urgency, and it is one we would do well to listen to.