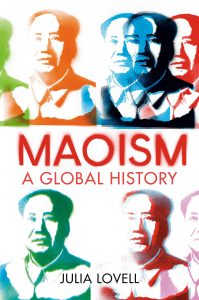 As if parodying the era’s radical chic, a 1967 issue of Lui magazine (France’s Playboy) included a supplement illustrated with quotes from Mao Zedong and scantily clad women assuming militant poses inspired by the Red Guards of China’s Cultural Revolution. One nude woman jumps out of a cake under the caption “revolution is not a dinner party”—one of Mao’s many proverbs.

This is one small example of the strange, far-flung influence of Mao Zedong—part of a much larger story, obscure to most Westerners, but masterfully told by Julia Lovell, professor of modern China at the University of London. Historians, Lovell plausibly argues, may someday see October 1949 rather than October 1917 as the game-changing revolution of the last century.

Lovell covers some familiar ground, such as the human-induced famine of the Great Leap Forward in the late 1950s that claimed around 30 million lives, and the Cultural Revolution of the 1960s and 1970s that took countless more. She also nicely canvasses Mao’s improbable ascent to power in the Chinese Community Party (CCP) and the Communist Revolution that created the People’s Republic of China (PRC). But the book soars in its concentration on the manufacture and dissemination of “Maoism,” a highly adaptable ideological élan—a political attitude, a frame of mind—that formed and deformed protest and liberationist movements across the globe in the twentieth century.

What is the nature of this élan or “Mao Zedong Thought” as it is known in China? Lovell defines it using the aphorisms of Mao most frequently invoked by his global acolytes. These include: “power comes out of the barrel of gun,” a candid recognition that intimidation and violence have a place in politics; “revolution is not a dinner party,” that the true revolutionary cannot worry about propriety and collateral damage; “practice is the sole criterion of truth,” that theory and intellectuals (especially those beholden to “bourgeois” values) should not be trusted; “women can hold up half the sky,” a radical egalitarianism with respect to the sexes (which nonetheless did not impede Mao’s own misogyny and philandering); “expose errors and criticize shortcomings,” a mandate to challenge anyone who deviates from party orthodoxy; “imperialism is a paper tiger,” that Western colonialism appears strong but cannot withstand a frontal challenge. When combined with understandable grievances with colonial rule and admiration for Mao’s rapid political and military successes in the 1940s and 1950s, these dicta made for a powerful ideological cocktail that gained worldwide “potency, persuasiveness, and mobility,” according to Lovell.

But the global reach of Maoism might not have happened without one useful idiot, the American journalist Edgar Snow and his wildly influential book, Red Star over China, first published in 1937. Eager to make a name for himself, Snow gained unprecedented access to Mao and his lieutenants while the Red Army was a rag-tag guerilla force in western China, hazily known to most Westerners. Adulatory accounts of Mao’s demeanor and ideals, vivid descriptions of the famous Long March, the omission of several known brutalities, and an uncritical acceptance of Mao’s conception of Chinese history, not to mention Mao’s own interventions to shape the project’s outcome, led to a book bordering on hero-worship. Once translated into various languages, including Chinese, the book became the gateway drug into Maoism for many future revolutionaries, inside China and abroad. “Edgar Snow,” Lovell sums up, “is the first main character in this global history of Maoism because without him both a domestic and international cult of Mao would be hard to imagine.”

After treating Snow, Lovell charts the export of Maoism—and sometimes Chinese financial and military aid once Mao came to power—to various global destinations, including Indonesia, Zimbabwe, Malaysia, Korea, Vietnam, Cambodia, Peru, Nepal, India, and, not least, Western Europe and the United States. Mao rescued North Korea in its time of need, making possible the current regime there; supported Vietnamese communists in the hottest fighting of the Cold War; and in Cambodia backed Pol Pot and the murderous Khmer Rouge. Maoists today are in power in Nepal—and India, which survived a Maoist rebellion in 1967, still claims that a simmering Maoist insurrection remains “the biggest internal security challenge facing our country.” A meticulous historian, agile with qualitative and quantitative data, Lovell’s global reach allows her to generalize that “Maoism was one of the most significant and complicated political forces in the modern world. A potent mix of party-building discipline, anti-colonial rebellion … grafted onto the secular religion of Marxism, Maoism not only unlocks the contemporary history of China, but is also a key influence on global insurgency, insubordination, and intolerance across the late eighty years.”

The chapter on Maoism in the United States and Europe in the 1960s is eye-opening; the influence of Maoism here, according to Lovell, “remains one of the most significantly under-told stories of this epochal moment of cultural revolution.” Keen to correct the story, she makes connections between Maoism and the Red Army Faction (also known as the Baader-Meinhof Gang) in Germany, the Red Brigade in Italy, various Communist parties, ’68ers and other protest groups in Europe and North America, and, not least, the Black Panthers. “Mao Zedong is the baddest motherfucker on the planet,” as the Panther Eldridge Cleaver put it, capturing the Chairman’s visceral appeal for political radicals.

Other Western sympathizers included Jean-Paul Sartre, Simon de Beauvoir, Rudi Dutschke, Susan Sontag, Julia Kristeva, and Michel Foucault—and this is to say nothing of Che Guevara and his crowd in Latin America. With the Soviet image tarnished after quashing uprisings in Hungary in 1956 and Czechoslovakia in 1968, and given Mao’s defiant departure from Krushchev’s call for “peaceful coexistence,” the Western Far Left often gravitated to the “moral glamour” of Mao, using his image to stoke anti-Americanism and imagine “a universal project to overthrow global capitalism.”

Lovell perceptively notes the irony that many Western revolutionaries were not the rural lumpenproletariat of Mao’s imaginings, but students from middle-class or affluent backgrounds. When students occupied the Sorbonne in 1968, they pinned portraits of Mao on pillars and windows. Others dutifully distributed copies of Mao’s Little Red Book. “During these years,” as one erstwhile French Maoist candidly remembered, “there was frankly nothing better to do in France than to be enraged; and nothing better for the enraged than to be Maoist.” Lovell recognizes that Maoism was not the only influence on the counterculture, and she qualifies that Western adaptions of Maoism often “tell us far more about these distant observers” of Mao’s politics than about Mao’s politics itself. “Yet amid the smorgasbord of influences,” she fairly concludes, “the theory and practice of Maoism exercised a particular fascination.”

Lovell’s concluding chapter on Maoism in the PRC today—nicely titled “Maoish China”—is also instructive. In it, she recounts her own change of mind from thinking Maoism a casualty of the market economy several decade ago to believing that its legacy survives in contemporary China. Mao’s iconic portrait still hangs in Tiananmen Square, ground zero for Chinese political power, and his body lies embalmed in state in the Square’s center, welcoming both the curious and adoring. The deep politicization of the Chinese judiciary, the perduring insistence on quasi-secretive one-party rule, the craving for global influence and respect, and the ruthless suppression of dissidents are additional hallmarks of Mao’s legacy.

Lovell also sees it in the imitative behavior of Xi Jinping, especially in the decision taken in 2018 to abolish his term limits and to enshrine “Xi Jinping Thought” into the Chinese Constitution. She sees it at the level of popular culture as well, documenting instances of taxi drivers hanging pendants bearing Mao’s image on their rear-view mirrors, and even in the erection of shrines of devotion to Mao. The CCP has tagged these sites “superstition” and shut them down. But both their erection and heavy-handed suppression bear witness to the complexity and malleability of Mao’s legacy.

Lovell also sees it among China’s intelligentsia today, spotlighting scholars who downplay the atrocities of the Cultural Revolution, defend Maoist policies, and encourage coercive measures to maintain ideological conformity. The recent Chinese past, relatedly, has become a political landmine with CCP apparatchiks and Neo-Maoist intellectuals joining forces to effectively “clampdown on serious, informed debate about post-1949 history.” Many other examples could be adduced, but Lovell nicely sums up Mao’s legacy in China today as “caught between official opportunism and ambivalence, commercial kitschification and inchoate grass-roots sentiment.”

Lovell’s Maoism is not flawless. Saying surprisingly little about the PRC’s despoliation of Tibetan Buddhism, she could also have devoted more time to Mao’s general anti-religious policies during the Cultural Revolution and their echoes today in the widespread persecution of Christians and in the appalling re-education camps for Uighur Muslims in Xinjiang province.

Furthermore, she tiptoes around but never makes a direct connection between Mao’s influence on the New Left in the 1960s and its routinization today in, say, the diversity bureaucracies in America’s colleges and universities that encourage groupthink and provide an institutional backstop for techniques of public shaming (often whipped up by social media and directed against professors and speakers who deviate from permissible speech) that eerily resemble practices during China’s Cultural Revolution. Indeed, the quest for ideological purity and shaming tactics of the Western Far Left today, whether consciously or not, bristle with Neo-Maoist sensibilities.

Blemishes notwithstanding, Lovell’s achievement remains considerable. “Once you write Maoism back into the global history of the twentieth century,” she concludes, “you start to get a very different narrative from the standard one in which communism loses the cold war in 1989.” Rarely is such in-depth scholarship (in multiple languages covering numerous countries and many archives) combined with such graceful prose. The publisher touts the book on the cover as “a revelatory work of world history.” Frequently cover descriptions overreach. This one emphatically does not.

Thomas Albert Howard is professor of humanities and history and the Duesenberg Chair in Ethics at Valparaiso University. He is the editor of The Idea of Tradition in the Late Modern World (Cascade, 2020).