Members of the Club 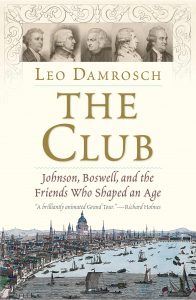 The Club: Johnson, Boswell, and the Friends Who Shaped an Age
By Leo Damrosch.
Yale University Press, 2019.
Hardcover, 473 pages, $30.

Better than a century ago G. K. Chesterton found much that was wrong with his world. In his delightful lamentation, What’s Wrong with the World, far from the least of those wrongs concerned the “decay of taverns,” which he associated with the “general decay of democracy” in his England. A tavern, after all, was home to what Chesterton regarded as the “masculine spirit of equality.”

For Chesterton, there were “no two nobler words in all poetry than Public House.” At least that’s what he told a “roomful of socialists,” who proceeded to laugh at what they presumed was a joke. But in this instance G. K. Chesterton was not joking. In truth, he was surprised that these socialists had thought he was making a joke, since the socialist goal was to “make all houses public houses.”

In The Club Leo Damrosch gives us hints of those great disputes by sketching portraits of those who gathered weekly at the Turk’s Head Tavern. While this “ordinary London pub” is long gone, the Club (also sometimes known as the Literary Club) continues to meet. But Damrosch has chosen to dwell only on the two decades following its founding in 1764.

As might be expected, he also dwells on Samuel Johnson and James Boswell. But they are far from his only subjects. Separate chapters are devoted to such intellectual luminaries as Edward Gibbon, Adam Smith, and Edmund Burke, as well as actor David Garrick and painter Joshua Reynolds. Actually, this book might just as well have been titled “Members of the Club.” Damrosch has much to tell us about the lives and loves of individual members, but much less to tell us about the interactions among them, save for the Johnson-Boswell relationship.

Damrosch declares the Club itself to be the “virtual hero” of his story, but readers expecting to find its weekly sessions at the center of things will be disappointed. For that, Boswell on Johnson remains the best—and perhaps only—source. Therefore, any disappointment may be attributed to Damrosch’s early on designation of hero status, rather than to his decision not to try to improve on Boswell’s telling of this piece of the story.

That conceded, Damrosch’s subtitle presents a problem as well. Just how did Johnson, Boswell, and their friends “shape” their age? Damrosch might—and no doubt should—have answered this question. But he really doesn’t, content as he is instead to give us finely crafted portraits (augmented by wonderful plates) of his select—and selected—members.

He also serves as a helpful complement to Chesterton. In What’s Wrong with the World Chesterton insists that those who regard the “demeanor” of Mr. Johnson as “harsh and despotic” are less than half right. That Johnsonian demeanor could be “occasionally harsh,” but it was “never despotic.” Chesterton clarifies further: “Johnson was not in the least despotic.” What he was, for Chesterton, was a “demagogue.” A demagogue? Isn’t that a terrible thing to be? Not necessarily, insists Chesterton, who then clarifies even more: Johnson “shouted against a shouting crowd.” He also “wrangled” with others, but such wrangling was proof positive to Chesterton that fellow members were “allowed to wrangle with him.” So perhaps he was nothing more or less than a demagogue among fellow demagogues.

While Chesterton’s notion of a demagogue may not comport with ours, he did have an important point to make. If Johnson could occasionally exhibit verbal “brutality,” he did so on the basis of the “idea of an equal scrimmage, like that of football.” If Johnson “bawled and banged on the table,” he did so because he knew he was a “modest man.” At least he knew he was that whenever he was among his fellow members of the Club at Turk’s Head Tavern.

Was Johnson also an honest man? Chesterton certainly thought so—and in more ways than one: The Samuel Johnson was “honestly afraid of being overwhelmed or even overlooked” whenever he was among his fellow members of the Club. This Samuel Johnson may have been the Samuel Johnson, but at the Club he was simply one among equals. To Chesterton, Johnson was often an “insolent equal,” and therefore he was “loved by all who knew him.” Well, at least by all who knew him whenever he appeared at the Club.

It is doubtful that Damrosch would dissent from any Chestertonian thought on the twin subjects of Samuel Johnson and pubs. Despite Damrosch’s insistence that the Club is the “virtual hero” of his story, what we have here is a series of stories of virtual equals, each of whom had to have the unanimous consent of the existing members in order to be approved for admission.

That consent depended primarily upon “intellectual distinction” rather than upon relatively minor considerations, such as reputation or fame. To be sure, intellectual firepower often produces fireworks, but it isn’t always conducive to promoting a sense of equality among those who claim to possess it. But something strange seems to happen when its possessors gather together in a public house. Members may disagree loudly, even fiercely, but the spirit of equality reigns undisturbed from beginning to end. Damrosch tells us that Johnson loved taverns. Perhaps that is why.

If Damrosch is understandably unable to tell us much that is new about the content of their debates and discussions, he seeks to make up for that omission by giving us glimpses into their private and public lives. Damrosch also promises to let us in on their “intersecting” lives, but much of that is confined to the Johnson-Boswell relationship.

This unlikely pair met just before the Club was formed and almost immediately formed a “strong friendship.” Eleven years Johnson’s junior, Boswell became the son that Johnson never had, while Johnson came to be the father that Boswell wished that he might have had. They were an odd couple in many ways. Johnson was a self-made man and “proud of it.” Boswell, at the other extreme, descended from a long line of Scottish patricians. But was he a man of intellectual distinction? Members had their doubts; hence their reluctance to admit someone whom many dismissed as an “agreeable lightweight.” But Johnson insisted, and after some years prevailed, as disagreeable heavyweights often do.

Besides their friendship, the two shared a “dread of mental illness.” According to Damrosch, Johnson had inherited a “terrifying melancholy” (defined today as clinical depression) from his father. Boswell’s psychological maladies were less severe, but no less troubling (albeit more to others than to Boswell himself). A man of “greatly immoderate passions,” Boswell devoted many an evening to assignations with prostitutes and many too few of his days to following in his father’s footsteps by mastering the practice of law. Instead, he felt himself to be at his most “masterful” and most “free” during his evenings with prostitutes. Otherwise, he thoroughly enjoyed “playing the disciple” to Johnson.

Damrosch, however, does not range far beyond this pair of “intersecting” figures, preferring instead to provide us with marvelous sketches of other individual members of the Club and their mostly individual stories. We encounter Gibbon, whom Boswell designated as “I” (the infidel), and who possessed the historian’s “indispensable attribute of wonder,” even as he was determined to portray the Church as simply one historical phenomenon among many, and not as the key to history.

Then there is Smith, who was elected to the Club at age fifty-two in 1775 on the basis of his Theory of Moral Sentiments. Unlike Boswell (who by the time of his marriage at twenty-nine to a first cousin had had relations with three wives of others, four actresses, three women of the “middle class,” and something over sixty prostitutes), Smith was content to spend the whole of his life with the only woman who mattered to him—his mother. And unlike Johnson the moralist, who was concerned with how people should act, Smith the social scientist was content to observe how people did act. However, this stance did not prevent the author of The Wealth of Nations and the detector of the invisible hand from making such pronouncements as this: “The government of an exclusive company of merchants is the worst of all governments.”

How such differences of opinion were hashed out among disputatious tavern equals at the Club we do not learn from The Club. Damrosch does inform us that, unlike your local Rotary club, attendance at the Club was not mandatory. In fact, two-thirds of the way through the book he drops the news that Johnson was seldom there. Apparently, Johnson had told Boswell that the gatherings had degenerated into a “mere miscellaneous collection of conspicuous men,” and men without any “determinate character” at that. To make matters even more problematic, Damrosch judges that Johnson generally preferred the company of women to the company of most men.

So maybe, just maybe, G. K. Chesterton could be accused of sentimentalizing those great old tavern disputes of a bygone day. And Leo Damrosch might be charged with making too much of the Club’s ability to shape an age. Still, those two words, Public House, remain noble words. And the equality to be achieved therein remains a noble goal. That leaves democracy, real democracy, for both the common man and for those of intellectual distinction who have not lost their tavern-inspired sense of “rowdy egalitarianism.” It, too, remains a noble ideal.

All of that remains true, even if more than two centuries ago Samuel Johnson was only occasionally on hand to lament the decline of this club, and even if more than a century ago G. K. Chesterton could already detect the “decay of taverns” and the accompanying “decay of democracy.”