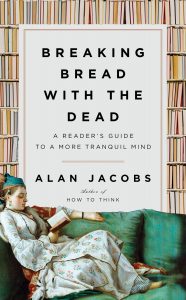 Breaking Bread with the Dead: A Reader’s Guide to a More Tranquil Mind
by Alan Jacobs.
Penguin Press, 2020.
Hardcover, 192 pages, $25.

An old man in an Italian farmhouse muses to his friend: “What brings tranquility? What makes you care less?”

Two thousand years later, fifteen people sitting in an air conditioned classroom in central Texas, strangers to the old man and his world, realize his question is more relevant than ever.

The professor in that Texas classroom was Alan Jacobs, whose Breaking Bread with the Dead uses this anecdote about the musings of the Roman poet Horace (65–8 BC) and his Baylor University students as the jumping off point for a literate and humane exploration of the necessity and difficulty of engaging with the ideas and people of the past.

Informed by the work of German sociologist Hartmut Rosa, Jacobs starts not with an answer to Horace’s question but with two perceptions that create a formidable barrier to tranquility today: information overload and social acceleration.

Information overload, “we are always receiving more data than we are able to evaluate,” forces us to triage our attention every day. “To avoid madness we must learn to reject appeals to our time, and reject them without hesitation or pity.”

Social acceleration, “the world is not only changing but changing faster and faster,” fosters the seemingly contradictory feeling that everything is moving too fast but at the same time we are trapped in social structures and life patterns, deprived of meaningful choice. “You can’t stop playing the game, but the rules keep changing without warning.”

Relatedly, there is an “increasing sense not just that the past is sadly in error, is superannuated and irrelevant and full of ideas that we’re well rid of, but that it actually defiles us—its presence makes us unclean.” This belief in defilement undermines what we need most to find tranquility amid the forces of information overload and social acceleration: “personal density” and “temporal bandwidth.” These are terms Jacobs borrows from Gravity’s Rainbow, the 1973 Thomas Pynchon novel.

Temporal bandwidth is the width of your perspective or vision; your ability to dwell in both the past and the future. And the thicker your bandwidth, the more solid your personal density, your sense of personal weight or depth. Personal density is, in Jacobs’s view, a mental anchor that keeps you from being blown away in the winds of information overload and social acceleration. It buffers you from the “tyranny of everyday anxieties” that flow from the “frenetic standstill,” the constant connectivity of the now.

A tension lies at the heart of Breaking Bread: engaging with ideas and writers from the past, the “opening of our minds and hearts to people from the past so that they stand before us three-dimensionally, in all the ways they resemble us and all the ways they do not,” is critical to tranquility of mind yet presents a formidable challenge in an era of “pervasive algorithmic marketing” and a “historical awareness that celebrates progress and escape.”

Our polarized culture seems to offer two competing visions of engaging with the past. The defilement perspective views history as “at best a sewer of racism, sexism, homophobia, and general social injustice, at worst an abattoir which no reasonable person would even want to peak at.” Its vision is limited to the now. What matters in this moment is all that matters, and it judges the past accordingly, throwing most in the ash heap.

Another perspective approaches the past as a unifying, idealized, almost sanitized, source of universal values and character traits. This produces a reverence for the past that is also locked into the present: “To say ‘This text offends me, I will read no further’ may be shortsighted; but to read a ‘great book’ from the past with such reverence that you can’t see where its views are wrong, or even where they differ from your own, is no better. Indeed, in foreclosing the possibility of real challenge it is worse.”

For Jacobs the requisite personal density is achieved through encounters with unlikeness. A critical value of the past is its distance and its difference. The distance of the past gives readers space to engage with and learn from people very different from them without the strong emotions of the present. There is time and space between the dead writer and the reader of today that is absent between friends, neighbors, or relatives with fiercely opposing views. The length and level of engagement can be chosen. If a book gets to be too much, simply close it for a time.

And it is difference that allows a wider perspective, to see both the past and future in a new light. French philosopher Simone Weil, for example, used The Iliad, the epic Greek poem, as a mirror on the First World War, illustrating how force lies “today as yesterday, at the very center of human history.” Jacobs responds, “Something terrible links, without erasing the differences between, the heights of ancient Troy and the cold beaches of Normandy. That linkage illuminates, reveals, the strange continuities of history, but only by keeping otherness before us as well.”

Jacobs argues neither for throwing out the past as hopelessly wrong nor for ignoring the serious issues with which readers must wrestle. The reader with personal density doesn’t have to abandon engaging ideas from the past because they may encounter racism, anti-semitism, misogyny, and other beliefs with which they strongly disagree. Instead, Jacobs’s strategy acknowledges that even the brilliant and insightful writers of the past were human beings with foibles and sins; with wrong beliefs that sit, often uncomfortably, beside their insights and talents.

We are all inconstant and changeable, we all shy away from the full implications of our best and strongest ideas. Why should Washington and Jefferson and Milton have been any different? We should not be surprised that they failed to live up to their ideals; we should, I think, be surprised that in their time and place they upheld such ideals at all. They pushed the world a little closer to freedom and justice. Of how many of us can that be said?

Approaching the past with this humility, Jacobs then encourages readers to look for what feminist scholar Patrocinio Schweickart calls a “utopian moment,” a moment when “something deeply and beautifully human emerges,” or an “authentic kernel,” something “perhaps deeply hidden within the book that speaks to you, that articulates an experience you can share.”

South African-born novelist, journalist, and political commentator Peter Abrahams (1919–2017) felt the call of England from reading John Keats (1795–1821) and other dead English poets; “their songs had pierced the heart of a black boy, a world away and in another time.” W. E. B. Dubois and “American Negro literature” turned him into a “color nationalist” and he saw the opportunities of America from South Africa during Apartheid. Yet England, and the dead poets, won out simply through the beauty of their language.

But for Jacobs, Frederick Douglass, the American orator, writer, and abolitionist, is perhaps the sterling example of how to engage with the past. For Jacobs it would be “utterly unjust to demand of anyone wounded as Douglass was wounded the charity he exhibits” toward the American Founders. This charity, however, is a model:

The idealization and demonization of the past are equally easy, and immensely tempting in an age of social acceleration. What Douglass offers instead is a model of negotiating with the past in a way that gives charity and honesty equal weight.

What Jacobs is arguing for is not an imagined cold academic objectivity but a habit of mind that steps outside the obsession with the present and seeks out the good, the true, and the beautiful, acknowledging the foibles and failures of those who came before, and thus finds a rootedness that leads not only to tranquility but the ability to build a better future—just as Douglass saw the pain and the promise of the Founding and used it to call America to something better.

In conclusion, Jacobs echoes Chesterton’s description of tradition as the democracy of the dead:

When we own our kinship to these people, they may come alive for us not just as exemplars of narrowness and wickedness that we have overcome, but as neighbors and even as teachers. When we acknowledge that even when they go astray they do so in ways that we surely would have, had we been formed as they were, we extend them not just attention but love, the very love that we hope our descendents will extend to us.

Jacobs somewhat tongue-in-cheek refers to Breaking Bread with the Dead as a self-help book. I doubt this slim volume will “go viral” like the latest TED talk or rocket up the bestseller list like the latest book on productivity or Scandinavian mindfulness, but one need only scroll the headlines or watch the news to recognize that his advice is sorely needed.

Maybe that old man in the Italian farmhouse was asking the right questions.

Kevin Holtsberry is an avid reader and occasional blogger who lives with his wife and children in the Welsh Hills of central Ohio.