More than an Education 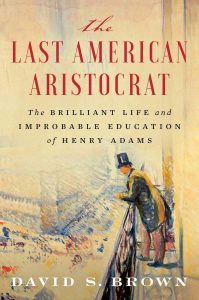 The year I was graduated from high school was the same one in which all of those end-of-the-century lists started coming out—The AFI’s Top 100 Movies, Sports Illustrated’s Sportsman of the Century, Time’s 100 Most Important People of the Century. Every time a new list appeared on television or in print, I devoured it, continually refashioning the canons of cultural excellence in my seventeen-year-old mind. No lists inspired more enthusiasm in me than the Modern Library’s top 100 novels and works of nonfiction of the twentieth century. I spent a considerable amount of the summer after I graduated from high school reading the number-one books on the Modern Library’s lists—James Joyce’s Ulysses and The Education of Henry Adams.

While Ulysses befuddled me then and befuddles me now (I do love Portrait of the Artist as a Young Man and Dubliners, though), Henry Adams’s bildungsroman appealed to me immediately. While he grew up a Boston patrician and I was raised in significantly more modest circumstances in Vermont, I found Adams a relatable character. Like Adams, I was interested in history from an early age and became a professional historian. We both came from what I thought of as historical families. My family was historical in the sense that we read encyclopedias for fun, visited battlefields, and my grandmother ran the museum in my father’s hometown, opened Wednesdays and Sundays from 12 to 4. His family was historical in the sense that his grandfather was John Quincy Adams.

We shared a New England that is as parochial now in the minds of its fellow countrymen as it was then. Like Adams, I feel ill-at-ease with many of the technological changes that have occurred during my lifetime—changes that apparently took place while I was spending my summers reading him. For both Adams and myself, discomfort with gadgetry is not merely a cultural or social stance. Despite efforts to adopt them to our respective ends, Adams was then as I am now genuinely illiterate when it comes to technical know-how. This tension between a quest for old-fashioned erudition and the demands of contemporary savoir faire struck me more than anything in my initial reading of The Education of Henry Adams and may have turned this tendency in my own personality into something of a self-fulfilling prophecy.

The life and times of Henry Adams has a worthy arbiter in biographer David S. Brown, who is one of the best cultural and intellectual historians working today. His previous biographies of Richard Hofstadter and F. Scott Fitzgerald are both robust contributions to our understanding of those figures—men whom he casts as outsiders in their own moment but cast a wide shadow over academe and the literati in death. The same can be said for fellow-outsider Adams, whose Education, in the words of Brown, became “a disquieting statement on humanity’s imperilment in a civilization it has created but cannot control.” Published posthumously in the aftermath of World War I, The Education served as the architecture for an entire strain of skepticism towards the idea of progress. The echoes of Adams could be seen in a century’s worth of treatises as diverse as Sigmund Freud’s Civilization and Its Discontents, Max Weber’s Economy and Society, Christopher Lasch’s The True and Only Heaven, and, certainly, Russell Kirk’s The Conservative Mind.

Brown’s approach to telling the story of Henry Adams is both refreshing and surprising. Like many biographies based on writers best known for books published after their death, I assumed that The Last American Aristocrat would have a teleological feel to it—with The Education serving merely as the epitaph to a lifetime of labor. This is far from the case in Brown’s account of Adams’s life. The writing of The Education is more a culminating episode than the driving force behind the book.

The Henry Adams of The Last American Aristocrat is a man who experienced, participated in, and analyzed an America that went through industrialization, a Civil War, and the First World War. Adams had friends and enemies in all the best circles, whether they were elites in politics, arts and letters, or finance. He attended Lincoln’s Inaugural Ball and dined with Franklin and Eleanor Roosevelt on many occasions. He counted both Robert Louis Stevenson and Edith Wharton among his friends. In addition, Adams was a globetrotting gadabout who was known at the toniest of tables in Russia, the Caribbean, and the Pacific.

The book’s subject is often criticized, including by Brown, for his lack of a common touch. To be fair, it would have been awfully difficult for a man that kept such rare company to appreciate the practice of everyday life of the average American. Nevertheless, Brown situates Adams’s views within his times but is never blind to his subject’s personal shortcomings—his anti-Semitism, his contempt for immigrants, his discomfort with the working classes.

Brown gets into the blow-by-blow of Adams’s personal life but never pushes the story beyond what the sources suggest. He discusses Adams’s often difficult relationships with his famous family and his wife Clover’s “melancholy” and subsequent suicide following her father’s death. Brown never goes in for salacious details, though. His focus is that of a historian of ideas, examining the ways that events in Adams’s life shaped his perspective on the world around him. The Last American Aristocrat is the story of a man who simultaneously benefitted from America’s emergence as a global dynamo and flinched at almost all of its consequences.

The book’s most compelling sections play to the author’s strengths by focusing on his subject’s intellectual life. Adams’s earlier works in no way get short shrift. Brown delves into the research and writing of Adams’s dense nine-volume political history of the United States in the ages of Jefferson and Madison as well as his biography of Swiss-American diplomat Albert Gallatin and the antiquarian masterpiece Mont Saint Michel and Chartres. In each case, Adams’s historical scholarship is a work of appreciation, whether of statecraft, diplomacy, or architecture. Brown pays particular heed to Adams’s novels, most notably the anonymously published Democracy: An American Novel. The author counts this satire of Gilded Age graft and spoils in Washington as one of the great political novels in American history, describing it as a “negative progress report of sorts on the nation’s ragged development,” a perspective that presaged his pessimism about the state of the Republic in The Education. Whether or not one shares Adams’s pessimism, Brown makes a convincing case that his subject is one of the enduring intellectual figures of his age, in large part because he experienced so much of it.

Clayton Trutor holds a PhD in U.S. History and teaches at Norwich University in Northfield, Vermont. He’d love to hear from you on Twitter: @ClaytonTrutor