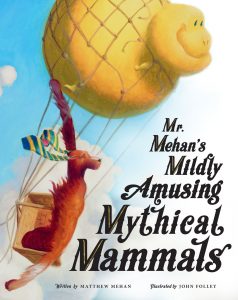 Few people have the chance to write a book with their best friend. Few Shakespeare scholars choose to write children’s books. Few, if any, children’s books contain words such as unctuous, lachrymose, sycophantic, and troglodytic. Yet all these things have come to pass in Matthew Mehan’s latest work, a “hypothetical alphabetical” as he describes it. It is, in a word, magical. It is an enthralling journey, not only through the alphabet, but through the intellectually vivid imagination of Mr. Mehan and his illustrator friend John Folley.

Mr. Mehan’s Mildly Amusing Mythical Mammals begins with notes to the audience. The children readers are exhorted to read well and listen carefully. The “adult” readers are urged to find their inner child in order to unlock the magic of the book’s poetry. Age doesn’t matter, only an open and fun-loving attitude is required.

The reader is accompanied through this alphabetical journey by two mythical creatures in their own right: the Blug, a large plodding (though quite affable) creature with tiny wings, and the Dally, who appears to be a mix of a dog and sloth. Oh, and his ears are neckties. An amusing mammal to be sure! From the Ango (short for Angogrubugunkalingstis) to the Tanglis to the Zealion, the Blug and the Dally discover many mythical mammals and learn many things about friendship and navigating the world with all its pitfalls, sorrows, joys, and triumphs.

A scholar, teacher, writer, and musician, Mr. Mehan is especially skilled in creating fantastic characters and giving them each their own unique, intelligent, and musical voice. His poems are reminiscent of the famed Aesop as well as the beloved Dr. Seuss. Perhaps the only talent he lacks is supplied by his dear friend John Folley. Trained by masters in Impressionism, Folley’s brush beautifully captures these fantastic mammals.

Many lessons are contained within these fun and informative poems: The Gallant shows himself to be gentle and mindful in his respect for nature; the Jargontalky reminds one to think well before speaking and to be on guard against lies, obscurity, and confusion; the Sillymede teaches similes—clever indeed! The rotund Tanglis imparts the importance of perseverance, even when the task at hand seems monumental; the wooly-quilled Quecambia illustrates the importance of standing upon principle—even to the point of extinction! The Urnaz provides a warning against arrogance and the Zealion brings the alphabetical journey to a close with a call to kinship and love. “So what, if loving each other takes work! Somebody else play the jerk!”

Through this alphabetical journey Mr. Mehan’s readers, young and old alike, are introduced (or re-introduced) to the truth that the world is rendered beautiful and colorful precisely because of the differences among us. As Mr. Mehan has his Zealion say: “You might, when there’s no clear sunlight, / Yet still forget the moon is bright.” The moon too provides light by which to see—different from the sun, but still good and valuable.

It is rare for a glossary to be as engaging as the main work, yet so it is with this book. In a fun turn-around from his earlier admonition, Mr. Mehan here urges his children readers to become grown-ups. Pay attention to words, he advises, for they are “signs of things unseen.” Readers are presented with many words, their meanings, origin, context, and usage. The beginner will also receive a helpful introduction to Latin—the key to goodness, truth, and beauty, according to Mr. Mehan.

Plato, Chaucer, Shakespeare, Dickinson, More, Longfellow, Socrates, Melville, Hippocrates, Augustine, Swift, and Erasmus are just some of the shining lights of Western Civilization that are found here, giving life and light to Mr. Mehan’s vocabulary. Beyond the glossary the fun continues with a treasure hunt through the many splendid paintings of the book.

Mr. Mehan’s Mildly Amusing Mythical Mammals is clearly more than mildly amusing—it is a highly entertaining journey though the alphabet where much more than the ABCs are encountered. Nature has much to offer and impart, if only one has the understanding and will to learn. Mr. Mehan believes strongly that children in age as well as children at heart are the ones best able to appreciate and cherish it.

Elizabeth Bittner holds a B.A. in political science from The Thomas More College of Liberal Arts and a masters in humanities from the University of Dallas. She currently resides in rural Missouri.