More to Say on Slavery and the Constitution 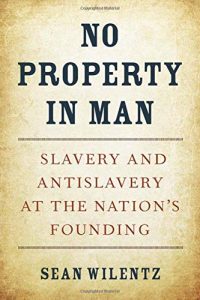 No Property in Man: Slavery and Antislavery at the Nation’s Founding
by Sean Wilentz.
Harvard University Press, 2018.
Hardcover, 368 pages, $27.

The single most influential interpreter of the Convention that framed the Constitution is the abolitionist William Lloyd Garrison. Two years after publication of James Madison’s account of the Debates in the Federal Convention of 1787, Garrison perused them for “such extracts … as relate to the guilty compromise that was made at the formation of the Constitution.” He concluded that the Constitution was “proslavery,” and damned it as “a covenant with death, and an agreement with hell.”

Today’s historians, many of whom proudly wear the label “neo-Garrisonian,” have almost uniformly adopted this judgment. Sean Wilentz’s No Property in Man: Slavery and Antislavery at the Nation’s Founding offers a welcome rebuttal. He argues the Garrisonian critique of the Constitution is “flawed” and its adherents “have misconstrued critical debates inside the convention.” In particular, they “have missed the crucial subtlety, which is this: although the framers agreed to compromises over slavery that blunted antislavery hopes and augmented the slaveholders’ power, they also deliberately excluded any validation of property in man.”

He opens boldly: “Organized antislavery politics began in America.” Eight state antislavery societies were formed between 1775 and 1790. As of the Federal Convention in 1787, five northern states and the independent republic of Vermont had banned slavery or passed laws for gradual emancipation, amounting to “the largest emancipation of its kind to that point in modern history.” Wilentz contends that this antislavery sentiment was well represented in the Federal Convention; influential delegates including Benjamin Franklin, Gouverneur Morris, Rufus King, and Luther Martin, among others, were connected with early antislavery efforts.

Nevertheless, to support his thesis that the framers refused to validate property in man, he concedes to the Garrisonians that this was the central issue of debate at the Convention. Thus he lets South Carolina’s Charles Cotesworth Pinckney open his coverage of the Convention with the assertion, “Property in slaves should not be exposed to danger under a [government] instituted for the protection of property.” (58) This is all the more puzzling given that Pinckney made this statement on June 12—nearly eight weeks into the debate. By this point, South Carolina, and the Convention, had departed a long way from the Virginia Plan, which proposed that the “rights of suffrage in the national legislature ought to be proportioned to the Quotas of contribution, or to the number of free inhabitants.”

Wilentz glosses over this debate about the principle of representation. More, he treats Pinckney as different only in degree from “the general view inside the convention,” defined by James Madison, that “the primary objects of civil society are the security of property and public safety.” Having presented a Convention solely about property, Wilentz grants to the Garrisonians that a distasteful bargain allowing representation of slave property, like the Three-Fifths Clause, was inevitable. He merely challenges that the South’s victory was not as extensive as the Garrisonians claim. “[T]he proslavery delegates, with all of their bullying, obtained nothing beyond what they could have expected from the outset of the convention …”

In showing how the Deep South seized the momentum late in the Convention, Wilentz acknowledges a real contest between antislavery principle and proslavery interest. More, he points to the ways in which the dynamics of such a complex debate resulted in contingencies that could not have been forecast. After the pivotal Connecticut Compromise (a major departure from the Virginia Plan and a bitter loss for Madison), the Convention delegated to some of its most experienced legal draftsmen the task of producing a rough draft of the Constitution. South Carolina’s John Rutledge and Virginia’s “pliable” Edmund Randolph (rather than Madison), aided by the Connecticut compromiser Oliver Ellsworth, and perhaps by Nathaniel Gorham of Massachusetts, outnumbered the antislavery James Wilson, and inserted a proposal that denied the new government power ever to prohibit the slave trade or to levy a tax on importation of slaves. Wilentz rightly concurs with the judgment that the Committee’s report was “proslavery” and a “monument to Southern craft and gall.” He also rightly qualifies that the Convention “diverged sharply from the Committee of Detail’s proslavery draft constitution,” permitting the power to abolish slavery after 1808, and referring to “persons” rather than “slaves” in a way that denied such “persons” were understood by the Constitution as property.

Finally, with regard to the question of whether the Convention intended for the Fugitive Slave Clause to guarantee property in slaves, Wilentz entertains neo-Garrisonian speculation that this clause was a sinister sectional bargain between the Convention and the Congress, which was meeting concurrently and debating the Northwest Ordinance. This speculation notwithstanding, even the proslavery Committee of Detail report did not include a provision for the reclaiming of slaves escaped from servitude. Instead, the faction represented by South Carolinians Pierce Butler and Charles Cotesworth Pinckney doubled down on its success in extending the slave trade, and hijacked conversation about the Extradition Clause to demand that fugitive slaves “be delivered up like criminals.” Wilentz accepts some coordination between the Convention and Congress, but insists that the Convention whittled away the worst language proposed for the Clause, leaving “the condition of slavery entirely a creature of state laws, its wording careful to avoid any recognition of slaves as property.”

Summing the legacy of the Convention, Wilentz says it “created a terrible paradox … of a Constitution that strengthened and protected slavery yet refused to validate it.” Yet Wilentz raises paradoxes of his own. First is his paradoxical treatment of Madison. Wilentz takes his central assertion, that it would be wrong for the Constitution to admit that there could be property in men, directly from Madison. But he portrays Madison as personifying all of the calculating amorality and cynical self-interest with which the Garrisonians have condemned the framers. Thus, while he makes a point to play up the antislavery credentials and sentiments of other delegates in Philadelphia, Wilentz makes a point to downplay Madison’s.

“Taken out of context,” he says of Madison’s refusal to allow the Constitution to admit property in man, “the quotation makes Madison appear as if he were more fervently opposed to slavery than he actually was.” Just as Wilentz does not trust Madison as a participant at the Convention, he does not trust Madison as a reporter. Thus he omits one of Madison’s—and the Convention’s—bluntest antislavery remarks, recorded in his Debates on June 6: “We have seen the mere distinction of color made, in the most enlightened period of time, a ground of the most oppressive dominion ever exercised by man over man.” Wilentz apparently accepts the cynical conjecture by Mary Sarah Bilder that Madison added this speech to his notes after the fact—to cover up his guilt about compromises on slavery. Yet this provocative comment was embedded in a more extensive speech about the nature of faction—a theme Madison was reflecting deeply on at the time, including in his Vices of the Political System of the U.S. written on the eve of the Convention, in his famous Federalist #10 written shortly thereafter, and in his letter to Jefferson where, after an extensive treatment of the problem of faction, Madison painted South Carolina and Georgia as a minority faction “inflexible on the point of the slaves.”

Wilentz also treats Garrison in a paradoxical way. Having accepted in principle, if not in degree, Garrison’s critique of the framers, Wilentz makes Garrison a marginal character in his narrative of the ensuing debate about the framers’ intent. His treatment of arguments by moderate abolitionists who rejected Garrison’s criticism of the Constitution as proslavery is welcome, both giving voice to true patriots long forgotten, and challenging historians’ confusion of Garrison’s volubility with his relative influence. Still, as Garrison’s colleague Samuel May said about these debates over whether the Constitution was or was not intended to be proslavery, “It seemed to me that it might be whichever the people pleased to make it.” The fact of the matter is that the present generation is pleased to make it proslavery, just like Garrison did. Wilentz’s work, because it accepts Garrison’s critique, is not likely to change that. Yet if Wilentz has opened a space for further challenge of the Garrisonian thesis, he has performed an invaluable work of historical revision.

Jason Ross has a Ph.D. from Georgetown University. He is currently at work on a book (with Gordon Lloyd), Slavery and the Well Constructed Union: Use, Misuse, and Neglect of Madison’s “Debates.” Follow him on Twitter, @Jason_C_Ross.