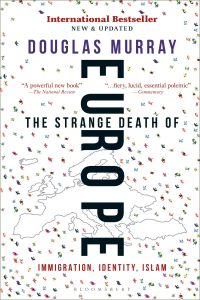 Over August and September of 2015 nearly 2 million people entered Europe. Germany added 1–2 percent of its population in a year. Sweden took the most migrants per capita. For Douglas Murray, this symbolized that “Europe is committing suicide.” Europe today, Murray writes, “has little desire to reproduce itself, fight for itself, or even take its own side in an argument.” As I write, Europe is simultaneously facing another wave of migrants from Turkey, while being ravaged by the coronavirus pandemic, a disease that originated in China and was spread to Europe by the movement of people around the world.

Rereading Murray’s book three years after its 2017 release, it is notable how few of the fundamentals have changed. Unlike other anti-Eurabia screeds, Murray’s writing does not bear the deformities of a right-wing rant. It instead adopts a tone of regret, mourning the likely passing of a way of life. The evidence gathered to support this thesis based in feeling is prodigious. The book is part historical sweep and part philosophical discourse on why Europe is experiencing the malaise it is. It is also on-the-ground journalism, humanizing those who see Europe, rightly or wrongly, as their best hope.

What we have here is a lament, delivered with an understated lyricism that works its way into one’s heart, making it heavy with the pain of loss. If history is the song of human experience echoing up and down the years, and civilization is a symphony in which we all play our part, then it feels like the music is in danger of falling silent. Franz Rosenzweig wrote that “the love of the peoples for their own nationhood is sweet and pregnant with the presentiment of death.” This seems a good description of Murray’s loss-tinged love.

The subtitle of Murray’s book—Immigration, Identity, Islam—delineates the three themes around which his narrative revolves. The first few chapters detail the history of mass immigration into Britain and the wider European continent since World War II. As Murray argues, none of Europe’s leaders expected so many to come. The numbers grew steadily across Europe, and then exploded in the 1990s. Alongside this underestimation, Europe naively expected these new arrivals to leave after a time, and always maintained that they would do so despite all evidence to the contrary.

The confusion born of ineptitude on the part of European leaders meant that any who questioned the changes underway in their societies were silenced. Censure was applied to those that mounted a political response, like the Sweden Democrats. Meanwhile, cultural and Islamist censure was applied to writers like Salman Rushdie and Michel Houellebecq. Gay populist Pim Fortuyn and Dutch filmmaker Theo van Gogh were murdered, while the editorial staff of Charlie Hebdo were massacred. Ayaan Hirsi Ali was chased from Europe for the crime of daring to believe and defend its premises, now despised or despaired of by those around her.

Those “prophets of dishonor,” as Murray calls them, were often left to face the guns, bombs, and blades of Islamist terror alone. It was easier for Western politicians and intellectuals to castigate those raising the issues of immigration, integration, and Islamism than address the problems of mass migration, population change, and terrorism themselves, as they had caused these problems through their incompetence.

This confusion and cowardice about immigration and the problem of Islamist extremism and fundamentalist Islam were on full display in the debate around multiculturalism. Having gone from assuming migrants would leave to celebrating cultural difference, Angela Merkel and other European leaders proclaimed in 2010 and 2011 that multiculturalism had failed. But then they didn’t quite know what to say or do next. There was no real move to slow the numbers coming in, or to say what it really was that Europe stood for, or what the foundation was that it stood on.

As a result of this indecision and weakness, cultural discussions went subterranean. Those like Jean Raspail in his morally and artistically appalling novel, The Camp of the Saints, came to be seen as spokesmen of the “Great Replacement,” the conspiracy theory created by Renaud Camus. “Dark Specialism”—the feeling that one society is dying off while another takes its place—grew and the words and deeds of those in political and cultural power did nothing to dispel it. In my view Murray gives too much credence to this, as data show that while Europe’s demography will change, Muslims will not be a majority of Europe’s population.

Meanwhile, there continued to be a celebration of all aspects of foreign cultures and their histories alongside a simultaneous denigration of European culture and history. The feelings of guilt over Europe’s past, Murray argues, are not the purview of a philosopher but a psychiatrist. There is a masochism in Western culture; we seem determined to see ourselves as the worst people in history. We are uniquely guilty of history’s crimes, and our achievements, never our own, do not in any way compensate for this. If history is written in blood, Europe’s past is written in the brightest shade of scarlet. But Europe’s history is not unique in its blemished record. To claim otherwise is to be ignorant, disingenuous, or deliberately destructive.

The tales we tell ourselves of our past affect present action. Merkel was desperate that Germany not be seen as repeating its past, and the migration crisis was a blessing of repudiation. Open Europe’s borders, let in the migrants, and Germany’s sins would be washed clean. Of course, the fallout destroyed the dream of progress that modern Europe was built on and believed in as a substitute for Christianity. It also reduced the migrants themselves to ciphers of redemption, blank slates upon which we wrote the script of our salvation. In some sense, immigration was not about these people who, in the words of one Afghan refugee Murray spoke to, had “seen everything.” Merkel’s act bespoke a civilization wallowing in a self-hatred that comes in a decadent twilight time, when we feel the story has run out.

This feeling that there is no point to ourselves anymore is the most important part of the book, and the least publicly discussed. Questions of meaning and purpose are too deep for our shallow culture to contemplate. They are too difficult and hard edged. While we may try to anesthetize ourselves from confrontation with the questions of existence, they remain nonetheless. The liberal dispensation of the last sixty years calls us to complete self-creation, discounting all the inherited ways and forms that used to guide us. Endless choice in identity ends with no identity at all. We no longer know how to live.

As Murray writes, “The fact that all of our utopias failed so terribly did not only destroy our faith in them. It destroyed our faith in any and all ideologies.” We no longer have a story to tell ourselves. Religious, artistic, and political dreams all failed. Rosenzweig has argued that the longing for immortality found its expression in religion, which gave life to the culture that wove individuals into the fabric of time that stretched across the years. As Murray argues, “the loss of religion to Europe did not just leave a hole in the moral or ethical outlooks of a continent, it even left a hole in its geography.” As a culture we do not know where we are going in the next life, nor do we in this life. For Rosenzweig loss of hope in the eternal is fatal on a societal scale. It manifests in collapsing fertility rates, deaths of despair, and euthanasia for “tiredness of life.” Children are a biological expression of our transcendent hope for the future. If there is no hope of transcending death, why would we renew life?

Douglas Murray’s lament for Europe is a testament to the power of the word to capture life. Finishing the book for a second time, it begged the question of whether there is a way back. I wonder if this is possible. I was left feeling that the melody of our civilization is at risk of fading away, leaving nothing behind save a few scattered notes, echoes heard on the winds of time before being snatched away forever. But it is our choice whether this is so.