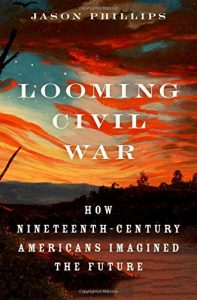 “What is past is prologue.” William Shakespeare’s line from The Tempest is inscribed on Robert Aitken’s statue Future, located on the northeastern corner of the National Archives Building in Washington. For Jason Phillips, this monument must present an astute observation of American life. In his Looming Civil War: How Nineteenth-Century Americans Imagined the Future, he examines how Americans—both leading up to the Civil War and during the bloody conflict—strung events together to create a grand narrative about the future. Their imaginations affected their decisions and the direction of the country during a pivotal moment in our nation’s history.

Looming Civil War begins by discussing the original concept of “looming,” an experience sailors often went through while at sea, “where refraction lifted land and ships into the sky.” This illusion inspired such legends as the Flying Dutchman and caused seafarers to imagine land that simply was not there. Looming offers Phillips a useful metaphor for the way in which nineteenth-century visions “formed, spread, and made history” in the United States. “First,” he writes, “some spark, an event or object captured people’s attention. Then, a unique atmosphere elevated and enlarged that spark, making it loom larger than reality. Finally, observers and visionaries focused on it and reported what appeared to be beyond the horizon.” Like the famous ghost ship, the future loomed over the heads of many Americans who lived, and died, during the 1850s and 60s.

Hopes, and fears, consumed many Americans during the Civil War era. “Anxious visionaries watched for enemies throughout the sectional crisis. Reformers, secessionists, statesmen, economists, generals, and many other prominent people assumed prophetic voices before the war,” Phillips writes. But they weren’t the only ones: “Popular forecasts rose from women, slaves, immigrants, and common soldiers.” From the enslaved running to Union lines, and, they hoped, a future of freedom, to young men, inexperienced in war, enlisting for the expected glory of battle, thousands upon thousands imagined future events, and all of them, in one way or another, made fateful decisions based on those expectations and anticipations.

Looming Civil War frames two ways that Americans in the nineteenth century experienced the future—through expectations, which he describes as people imagining themselves to be stationary while time passes through them, and anticipation, in which free will and the idea of progress reigned supreme. Like today, nineteenth-century Americans viewed anticipation and expectation as being similar in meaning, yet, through his thorough research and close readings, Phillips finds that Americans in the Civil War era defined “their temporalities with precise language, people expressed them with metaphors, idioms, active or passive voice, and conduct.” In short, sometimes Americans felt control over their fate, other times they felt as though they were riding an avalanche and waited for expected outcomes as the world seemed to be changing before them.

Expectations, both about their personal futures and that of the country, played an important role in how antebellum Americans framed “historic firsts.” Like today, Americans treated historic firsts as the beginning of something new, and living through change caused people to consider where this new path might lead. A major cast of personalities appears in Looming Civil War to demonstrate this kind of thinking. Over and over again, from John Brown and Abraham Lincoln to Edmund Ruffin or the enslaved of the South, Phillips shows how imagined futures, especially when they conflicted with each other, shaped the actual one.

Important for the historiography of the Civil War, Looming Civil War also tackles a major misconception about the sectional crisis and war that raged afterwards—the persistent contention that innocent Americans expected the civil war to last merely a few months. He writes, “After the Civil War, Americans forgot how they expected it. The broad antebellum horizon, with its diverse speculations, rumors, prophecies, anticipations, and expectations, shrank in hindsight.” Following Confederate surrender, Americans convinced themselves they had not expected such a long and brutal war. Cross-examining prewar journals and writing with postwar accounts and memoirs, Phillips reveals how “shifting stories” changed “how Americans described the looming war for generations to come.” When the future turned into the present, what had been expected no longer mattered, outside of sometimes justifying or explaining what happened.

The short-war myth has continued “because of its seductive narrative,” Phillips argues, which enshrines a “poetic structure to the Civil War.” Looming Civil War illuminates the power of this accepted paradigm. Historians like Bruce Catton and documentarians such as Ken Burns both perpetuated the short-war myth as assumed knowledge, wrongly influencing the understanding of the war for millions of Americans. These chroniclers fell prey to a temptation that many today writing history give in to: treating those who lived before like characters from an interesting story rather than accepting that much of life, and much of being a person, is filled with complexity and paradoxes. People change their minds based on what they think the future will hold. Few of us remain consistent in the face of change, or being wrong.

As modern Americans can certainly appreciate, technological innovation also upset the status quo during the Civil War Era. New communication and travel technologies helped spread partisan divides and wild rumors. These technologies did not build a larger national communion. Instead, they were often employed to promote differences, allowing more and more Americans to hate each other. Eventually, this grew into “collective anticipation,” or what we might call conventional wisdom. When combined with local gossip and fear, “Nineteenth-century technology accelerated and expanded the nation’s antebellum rumor mill.” This had a profound impact on the country.

Political leaders viewed their opponents as tyrants. Soldiers expected atrocities from their counterparts. Anticipations and expectations from the highly engaged in regards to what their opponents might do with power often caused extreme reactions. Vivid imagination sometimes led to paranoia, which created a vicious cycle that helped tear the nation apart, perpetuating the war. As battles raged on, telegrams offering only partial descriptions of events could travel in distance and time, delivering more evidence to build expectations about what might happen next. Telegraphs brought news of the future in small chunks. Looming Civil War shows how these partial, often flawed, portrayals of reality forced Americans all over the country to fill in the blanks. They often came up with worst-case scenarios and made plans accordingly.

The most important aspect of Looming Civil War comes from its main subject—people. Thinking about the future involves contemplating one’s hopes and fears and contrasting them with that of others, especially those with whom we may disagree. Americans saw their world turned upside down amidst mass violence and destruction during the Civil War. Sometimes this opened doors to freedom; other times it destroyed families and communities.

To cope, they shared these hopes and fears, leaving mountains of evidence for historians to explore. Phillips employs a methodology that allows readers to not only understand how and why the Civil War happened, but provides a way for us to consider our own thinking and how we will react when tomorrow arrives. Looming Civil War: How Nineteenth-Century Americans Imagined the Future helps us remember that people are constantly thinking about the future, and it often worries them. In the age of Facebook and Twitter, considering how people cope with a changing world through public and private statements about the future is worth doing.

Carl Lawrence Paulus has worked as senior staff on Capitol Hill, in the executive branch, and on political campaigns ranging from local to presidential. He holds a PhD in history from Rice University and is the author of The Slaveholding Crisis: The Fear of Insurrection and the Coming of the Civil War.