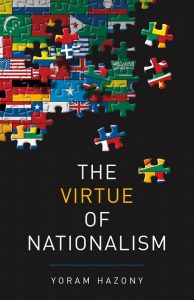 Reviewed by Glenn A. Moots

In a lamentable time when Ben Shapiro and Tucker Carlson are considered prominent conservatives, Yoram Hazony may be the most important conservative you have never heard of. Though The Virtue of Nationalism—recently named as ISI’s Conservative Book of the Year—is packaged as relevant for controversies such as Trump or Brexit, those who recognize what Russell Kirk called a conservative body of sentiments will find in Hazony’s book a thoughtful and deeply conservative apologetic.

Hazony sets out to defend nationalism: his prescribed “national state” stands between what he calls the poles of “empire” and “tribe.” Empire advances by what Hazony calls the “universalist revolutionary” promise of peace through perpetual conquest. At the other pole, tribes cohere through the loyalty of their members to inherited tradition. To preserve their traditions, the tribe must resist aggressors and inter-tribe anarchy—even committing atrocities—to ward off threats. Between these poles lies the national state, whose members respect the particularity of the tribe but summon its members to what Hazony calls “truth and beauty” in national traditions. By ideally pushing warfare to its borders, the nation allows for “free institutions and individual liberties” at home and “productive competition” among nations abroad. The resulting international order of independent national states respects what Hazony calls “collective self-determination,” though he does not believe that just any group of tribes or persons is entitled, prima facie, to self-determination.

Why should anyone trade tribe for nation or resist the next step to cosmopolitan empire? Hazony appeals to humility, skepticism, and experience. To put the last point in more Aristotelian terms, it is evident that human beings flourish in the polis more than in tribe or empire. Hazony scrupulously avoids any appeal to Aristotle, however, despite his reference to “virtue” in his title and his analytical framework implicitly casting nations as a kind of Aristotelian mean between two extremes. Likewise, Hazony refuses to marshal Herodotus or Plato as exemplars of skepticism that appreciates one’s own while respecting the traditions or virtues of “the other.” Resisting Hellenic support for his argument is consistent with Hazony’s excellent work elsewhere to advance the Hebrew Bible rather than Greek philosophy as the seminal Western political text.

To elaborate Hazony’s point about humility and skepticism, and to emphasize the Hebraic nature of his argument, think of his prescription as a politics of Creation and Providence—though Hazony does not use those terms himself. Hazony’s definition of the national state respects Providence because we honor our cultural and political inheritance—the place where we were born. Creation means acknowledging the limitations of our creatureliness. Like Edmund Burke, Hazony commends humility so that we can appreciate the institutions and customs of others. Humility enables us to recognize the virtues of other tribes vis-à-vis our own and join with them in creating a nation. Biblical ideas of Creation and Providence are more appropriate for Hazony’s Hebraic approach than deploying secular Greek concepts contrasting an “organic” tribe or polis with the “artifact” of empire.

Consistent with Hazony’s biblical foundation, he offers a realistic anthropology to support nationalism and oppose imperialism. Men are not good by nature, and no political arrangement can make them good. Nevertheless, imperialism presumes that good men will rule over bad men—particularly those who resist the siren song of universal political order. Imperial rule, however, makes men worse as they mercilessly eliminate dissent, whether found in individuals or nations. Imperialists are especially given to hate, Hazony argues, but they mask that proclivity with good intentions. Hazony writes, “My liberal friends can explain at length how their own imperialism will be different from all others that have come before.”

Imperialists are also like children, Hazony argues, because they are unwilling to grow up and become independent nations. Instead, they aspire to be dependents of benevolent global governance. Hazony offers yet another argument about maturity. While America, Israel, South Africa, or Serbia, for example, are scolded for not conforming to internationalist norms, African, Asian, or Middle Eastern atrocities and aggressions are winked at. In the racist minds of elite internationalists, more is expected from nations weaned on European political ideas while non-white nations are children who haven’t yet grown up.

The particular case of scorn heaped on Israel, and the plight of Jews in the Holocaust, play an essential role in Hazony’s argument. One of the most powerful rhetorical devices of the book argues that the correct reaction to the Holocaust was not creation of the European Union to “cure” the excesses of European nationalism. The Nazis desired, after all, an empire. The only security for Jews, or others facing persecution, is a national state capable of standing against its enemies. Hazony emphasizes that Israel is not simply a large Jewish tribe, however. Though Israel’s critics will no doubt howl at his characterization, Hazony emphasizes that Israel includes many non-Jewish minorities and respects their rights. In fact, Hazony presents Israel as a textbook case of his principle that “The overwhelming dominance of a single, cohesive nationality, bound together by indissoluble bonds of mutual loyalty, is in fact the only basis for domestic peace within a free state.… What is needed for … a stable and free state is a majority nation whose cultural dominion is plain and unquestioned, and against which resistance appears to be futile.” When a majority need not fear its minorities, it is more inclined to grant them rights and liberties. Hazony’s argument therefore rejects every call for egalitarian diversity.

Hazony’s moderate biblicism and case study of Israel does not amount to political theology, however, let alone theocracy. In a move that will no doubt trouble some readers on the contemporary Right, Hazony places Christianity alongside Islam, liberalism, Nazism, or Marxism as an ideology of empire and conquest. He blames Christianity’s gospel aspirations for its “hatred of the Jews.” The one exception to Christianity’s imperial ambitions is Reformed Protestant covenantal political theologies of the Netherlands, Britain, and America. Unlike the more imperial Germans, for example, the Dutch and Anglo-Americans could understand themselves as bounded nations on the Mosaic model. The Reformation not only revived political Hebraism but forced political struggles catalyzing the rise of national states. While Voegelin would not share Hazony’s praise for covenantal Reformed Protestantism, he would share Hazony’s implicit criticism of metastatic faith (religious or otherwise) whose immanentization inspires conquest upon conquest.

Of course, ambitious books like Hazony’s have their shortcomings. Like many political theorists, Hazony is quick to praise authors in the canon of political philosophy and scold others without persuasively demonstrating their historical influence. For example, he praises Emer de Vattel’s political and legal philosophy for advancing the Westphalian system of sovereign nations, but confines to a footnote any recognition that Vattel also advanced the international legal order Hazony dislikes. Also, Hazony is quick to blame Immanuel Kant’s Perpetual Peace (1795) for advancing internationalism and undermining nationalism, but he offers us no evidence of Kant’s influence.

Of course, there is also the simple fact that national states as we understand them today have only existed for a few centuries. History is, at least so far, not on Hazony’s side. Of course, the kind of internationalism he despises is even younger and less tried by experience. Though Hazony persuasively rails against universalist internationalism, he also concedes that international organizations like the EU or NATO may be only a façade to cover the imperial pretentions of Germany or America. It was certainly American power that drove Iraq from Kuwait or North Korea from South Korea—neither aggressor getting the winking double standard that Hazony claims for other Third World countries. In fact, America has arguably become precisely what Hazony abhors: as many around the world chafe as cheer Pax Americana. It was the “New World Order” of Bush 41, for example, that prompted Kirk to privately suggest he be executed on the White House lawn.

Both Pax Americana and the imperial dreams of Progressives a century ago demonstrate another problem with Hazony’s argument. While there is much to be said for covenantal Protestant political theology and its Hebraic roots, the covenant device is far more complicated than Hazony admits here. As I argue in Politics Reformed, Reformed Protestants had a hard time giving up the universalist visions of Christendom that Hazony regards with contempt. And even after such aspirations were tempered, Hebraic-Protestant concepts of chosenness were hijacked to become an excuse for British and American empire. In fact, it is often difficult to square American history with Hazony’s argument. David Hackett Fischer’s Albion’s Seed notwithstanding, America’s first majority “tribes” were reasonably similar Britons compatible enough to found a nation. (Kirk made precisely this argument in America’s British Culture.) However, the subsequent development of North and South meant the creation of very different tribes. Hazony asserts the South’s case for independence to be inferior to that of the original thirteen colonies, but he offers no compelling reason why 620,000 men should be sacrificed to settle the matter apart from speculation about “centuries of hostile competition” and “moral and prudential considerations” between the Confederacy and the United States.

While another serious move toward secession is unlikely, it is hardly the case that Americans are cohering around “truth and beauty” in our national traditions. If sacralization of traditions in families, clans, or tribes is imperative for successful nationalism, what will become of a nation whose traditions are weaker than ever? What is left to rally around except the Super Bowl, especially given the state of civic education and our existential zero-sum politics? Hazony’s description of America as “an English-speaking nation whose constitutional and religious traditions were originally rooted in the Bible, Protestantism, republicanism, and the common law of England” was as true at the time of the Civil War as at any time since, and yet even that could not bind our tribes together. What will bind us together in the future?

Whatever difficulties are presented by the complicated case of America, Hazony is always on firmer ground when he sticks to historical or empirical cases and eschews the rationalism he rightly criticizes. Despite its shortcomings, The Virtue of Nationalism deserves to be part of the canon of conservative reactions to the insanity of our age. Through this book and his online essays, Hazony has become a leading voice for conservatism in thought and practice, and this fine book is a valuable summons to time, place, and tradition as solutions to the problems of ideology, abstraction, and utopia. Hazony’s argument for nationalism gives us reason to hope.

Glenn A. Moots is professor and chair of political science and philosophy at Northwood University in Midland, Michigan.